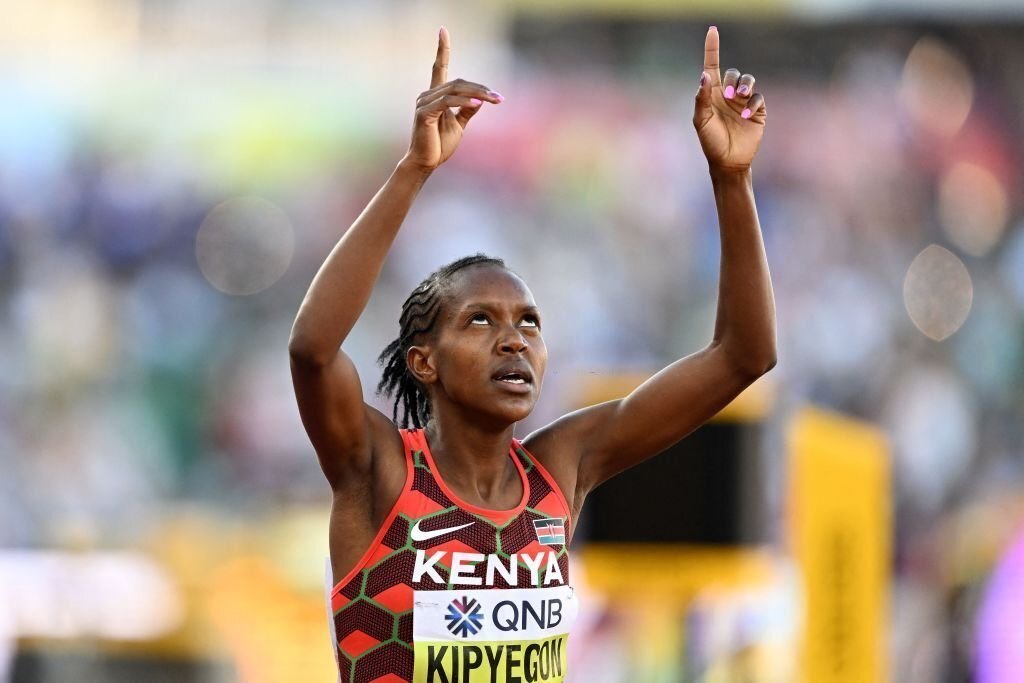 Faith Kipyegon clinched Kenya’s first gold medal at the World Athletics Championship after cruising to victory in the women’s 1500m.

Kipyegon reclaimed the title she lost in 2017, beating Ethiopia’s Gudaf Tsegay clocking a fast time of 3:52.96 while the Ethiopian timed 3:54.52 for silver with Britain’s Laura Muir timed 3:55.28 for bronze at third.

Earlier on, Conseslus Kipruto clinched bronze in the men’s steeplechase as Moroccan Soufiane El Bakkali once again ended Kenya’s dominance with gold. This is the first time Kenya fails to win the gold medal in the steeple in 15 years.

The Kenyan 1500m queen becomes a double World Champion, adding another feather to her cap after becoming a double Olympic champion last year in Tokyo. She also becomes the first woman to win four medals in the 1500m at teh World Championships. She was the champion in 2017 and now 2022 while she won a pair of silvers in 2017 and 2015.

In Oregon, she came in as hot favourite and her performances in the heats and semis had shown a woman willing and determined to get her title back.

Ethiopian Gidey bolted to the front just after the gun, signaling her teammate Freweyni Hailu to close in, apparently to create a shield against Kipyegon. But the Kenyan picked that out quick and moved to guard her space.

The opening lap pace was high and it was apparent there would be fast times. At the bell, Kipyegon was the first to make a threat and Gidey followed. She pulled her out for about 100m then relaxed. At the back straight, the Kenyan started to accelerate again and Gidey couldn’t keep up with the pace.

The Kenyan put on the afterburners to storm to victory and add more points to her place as the greatest 1500m runner of all time.

Earlier on, Kipruto who has been battling injury for the past three years was pleased with the consolation bronze, despite admitting he was pained that Kenya had once again lost the steeple title to the same man that beat them to the Olympic Games crown.

“Seeing that I only just returned to action recently and won bronze, I would say there is so much room for improvement. Next year, I promise to come back and fight tooth and nail against these guys to bring back this title to Kenya. As those who specialize in steeplechase, we will have a discussion when we return home and see which areas need to improve,” Kipruto said after the victory.

The Kenyan, Olympic champion from 2016, could not match up with the final burst of pace at the home stretch. He jumped over the last water hurdle shoulder to shoulder with El Bakkali and Girma, the man he beat to the title in 2019.

However, the two proved to have much stronger finishing kick. He crossed the line in 8min 25.13sec while Girma was second in 8:26.01. This is the same finish they had at the Tokyo Olympic Games where Kenya also settled for just bronze via Benjamin Kigen.