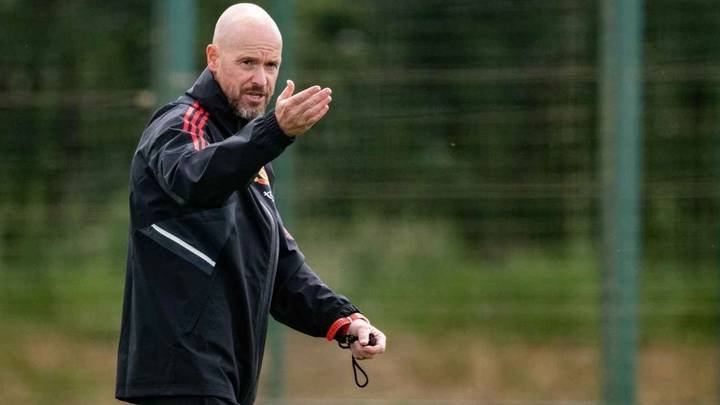 The new boss called upon 28 players for his first day of pre-season training in charge of Manchester United.

The Red Devils are one of few Premier League teams to have already reconvened ahead of the new campaign, with none of their ‘big six’ rivals returning for pre-season just yet.

But Ten Hag ordered first-team stars who didn’t play for their country in the June international window and academy players back to Carrington for his first session at the helm on Monday. The likes of David de Gea, Marcus Rashford, Jadon Sancho and Anthony Martial – who has just returned from an unsuccessful loan spell at Sevilla – were present, as was Donny van de Beek, who featured heavily under Ten Hag at Ajax.

Goalkeeper Dean Henderson was not present as his loan move to Nottingham Forest gathers pace, but highly-rated winger Alejandro Garnacho was one of several young players to be called into the senior session.

Man Utd have a busy summer schedule on the horizon as Ten Hag gets to grips with his new squad. They will travel to Thailand to face Liverpool before heading south to Australia for a further three matches.

Ten Hag and his charges then fly back to Europe to take on Atletico Madrid in Norway before wrapping up their pre-season preparations at home to Rayo Vallecano.

The first pre-season fixture for Ten Hag’s side will see them take on rivals Liverpool in a friendly match on July 12, the play Crystal Palace seven days later before taking on Steven Gerard’s Aston Villa on July 23 both in friendlies.

The first Premier League fixture for the Red Devils will see Ten Hag host Brighton and Hove Albion at the Old Trafford on Sunday August 7 2022.

After the Brighton clash, United travel to Brentford in the second round of fixtures before hosting rivals Liverpool in a must-watch early-season clash on the weekend of August 20.

United’s trip to the Etihad Stadium for the first Manchester derby of the season on October 1 kicks off a daunting month which sees Ten Hag’s side travel to Everton and Chelsea and host Tottenham, Newcastle and West Ham.

The final game before the season pauses for the winter World Cup will be against Fulham on the weekend of November 12/13. United then return to action on Boxing Day at Fulham.

Manchester United are yet to make any signing although they are closing in on signing midfielder Frenkie de Jong from Barcelona.