Kylian Mbappe equalled the record for the fastest goal in Ligue 1 history as PSG thrashed Lille 7-1 on Sunday evening. The Frenchman found the back of the net eight seconds after the referee blew the whistle for kick-off.

Neymar passed the ball to Marco Verrati, who gave it back to him, the Brazilian passed to Lionel Messi, and the Argentine gave the assists for Kylian Mbappe’s goal.

Lionel Messi’s pass was a thing of beauty, and so was Kylian Mbappe’s goal. Lionel Messi lobbed the ball from the centre of the pitch to find Mbappe, who was on his own on the edge of the box.

Lille players watched helplessly as Kylian Mbappe chipped the ball over their goalkeeper to make it 0-1 in less than ten seconds after kick-off.

Paris Saint-Germain manager Christophe Galtier spoke about the goal saying that it is a credit to the team’s technical staff and under-19. PSG’s under-19 scored a similar goal to Kylian Mbappe’s in the youth league against Salzburg.

However, Edouard Michut of PSG’s under-19 team needed 11 seconds to score the goal in the youth league.

Christophe Galtier said: “Our under-19 team did it in the youth league against Salzburg. We showed it to the players, and they were okay with trying it. So we worked on it in training, and it was very well executed tonight.”

The French manager also noted that such goals had been scored before in England, Germany and Spain. He mentioned Bournemouth and Rayo Vallecano as the teams which used the same kick-off style to score goals.

Kylian Mbappe was just a few tenths of seconds away from becoming the fastest goalscorer in Ligue 1 history. The lethal attacker has now equalled Michel Rio’s record for the fastest goal in the history of the French league. Michel Rio scored his goal after eight seconds on February 15, 1992, when his side Caen was facing Cannes.

Kylian Mbappe’s first goal on Sunday evening was his second of the season. It was also the Frenchman’s first of a hat-trick that night as Paris Saint-Germain thrashed Lille 7-1.

Lionel Messi and Neymar Jr were also on the score sheet on Sunday. Neymar scored a brace, whereas the Argentine scored one goal. 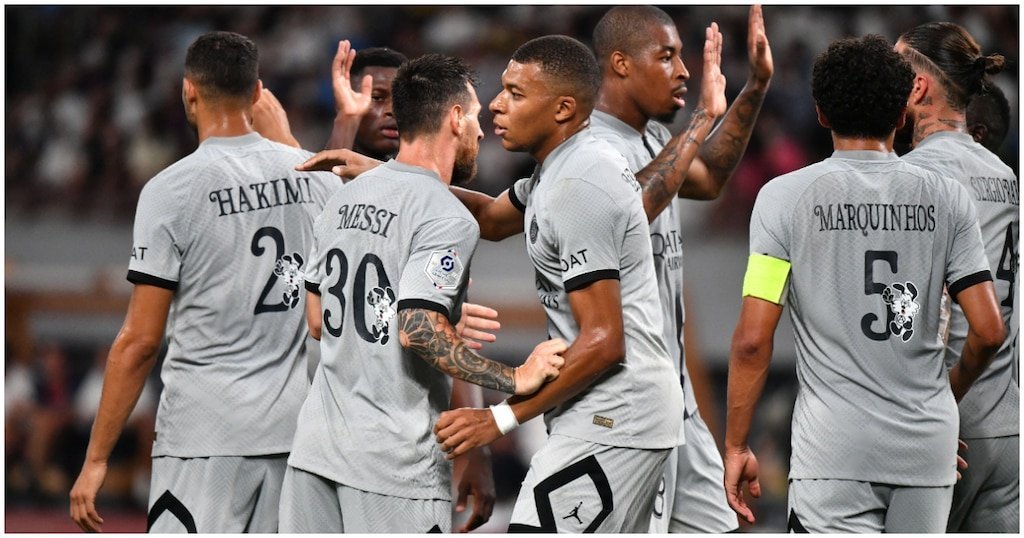 Paris Saint-Germain are currently on top of the Ligue 1 table with nine points in three games. They have scored 17 goals and conceded three. Marseille is second on the table with seven points.

Paris Saint-Germain has also dominated the list of top scorers in the Ligue 1. Neymar is on top of the list with five goals. Kylian Mbappe comes second with four goals, whereas Lionel Messi comes third with three goals.