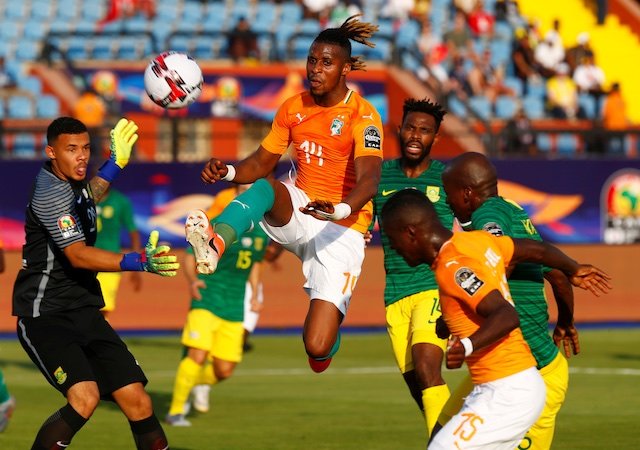 South Africa were on the wrong end of a 1-0 scoreline in a tightly-contested 2019 Africa Cup of Nations (Afcon) opening Group D match against Ivory Coast at the Al-Salam Stadium in Cairo on Monday afternoon.

There wasn’t a lot to choose between the two sides and for the most part, it was a resilient, solid display by Bafana, although they did look at times to be playing within themselves.

But it was unquestionably the Elephants who had the better of the scoring chances and in the end, Jonathan Kodjia’s goal midway through the second half gave Ivory Coast the result they probably deserved.

The first half saw the two teams fairly evenly-matched in a high-intensity encounter, although there was not too much in the way of goalmouth action as space and time around the box was at a premium due to some focussed and committed defending from both nations.

Ivory Coast had been enjoying a bit more of the ball, yet it was South Africa who had the first real opening, on 24 minutes, but after Sifiso Hlanti whipped in a good delivery from the left, his Bidvest Wits teammate Thulani Hlatshwayo was unable to direct his header on target.

The west African side’s first clear opportunity arrived in the 32nd minute and they were inches away from scoring as Nicolas Pepe curled a free kick against the crossbar.

Moments later, Hlatshwayo was caught out of position and a weak attempted headed clearance allowed Kodjia to run in on goal.

By the time the France-born striker reached the ball, he was only six yards away from Bafana keeper Ronwen Williams, who made a quite superb block to keep out a stinging volley. Not taking away anything from Williams’ save, but Kodjia could and should have scored – had he managed to put his shot a metre either side of the SuperSport United custodian.

That proved to be it for first half action, and after the restart, the game maintained its status quo as the two sides took turns in probing for openings, but lacked the creative spark to carve out any real opportunities.

The complexion of the contest was, however, to change on 64 minutes when Max Gradel curled in a low cross from the left which located Kodjia, who showed excellent composure to control the ball before slotting it through the legs of Williams and into the net.

Bafana grafted hard to try and find a route back into the game, but continued to struggle for penetration in the final third of the field, even with the late introduction off the bench of beanpole striker Lars Veldwijk.

And had Williams not made another world-class save – using his fingertips to push Pepe’s viciously-struck 89th-minute free-kick to safety, South Africa’s goal difference could have been worse – which may still prove to be telling should they hope to qualify for the knockout phase as one of the four best third-placed teams.

The result sees Ivory Coast joining Morocco at the top of Group D with three points. The two group leaders will square up on Friday, with Bafana Bafana set to take on their regional neighbours, Namibia.