Two Nigerian athletes, Emmanuel Inch and Toluwani Adebakin, will spend not less than a decade behind bars after they were found guilty of participating in a fraud scheme, according to a report filed by the FBI. 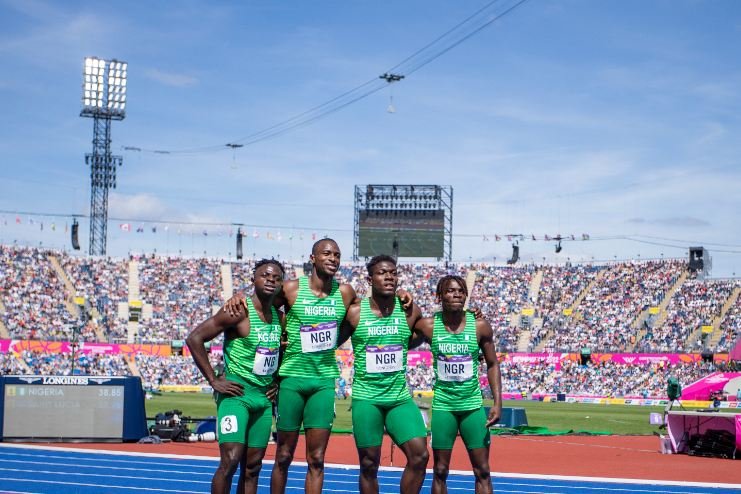 The Nigerian 4 by 400 relay team during the 2022 Commonwealth games that were held in Oregon in July. Photo by Tim Clayton Source: Getty Images

Last week, the American justice department charged the two with transferring thousands of dollars to a West African country, a move termed as a complex fraud scheme” with prosecutors saying multiple agencies were involved.

The 23 and 25-year-olds were teammates at William Carey University in Mississippi when they were found part of the fraud.

According to Dare Esan, A member of the Athletics Federation of Nigeria (AFN), the move to get the two athletes jailed will affect the country’s image and the sports federation.

“It’s regrettable and damaging to us and the image of our sport or federation, but Nigeria as a country,” Esan told BBC Sport Africa.

“This action will potentially affect other upcoming athletes seeking scholarships abroad. It dents the incredible achievements our other honest athletes have created over the years. But we are confident that America will treat it with justice and fairness, so anyone who is found guilty will carry their cross, be punished and should pay the price for their mistakes.”

“Sadly, wire fraud and other criminal activity are not always limited to athletics but have also become a national crisis that must be fixed urgently.

“Imagine an athlete like Inch, He won the African [Youth] Games medal, just to be caught in this? Why and what will You allow yourself and your details, including bank details, to be used for fraud to derail your career? It’s sad and disappointing to see the young and promising athletes with great potential go this route in life.”

The two defendants will appear in court on February 15 2023, in Hattiesburg, facing a penalty of up to 10 years in jail.

This move will be damaging to the careers of both men. Inch on his side, he’s one of Nigeria’s fast-rising long jump and triple jump talents.
Having joined the University of Alabama this year, he would no doubt be looking forward to a successful career. But that is now in danger because he will be about 33 should he be jailed for ten years.

Adebakin will be 35 years old should he serve ten years in jail.
He was part of the 4x400m relay team national championship and spent two years at William Carey University. He graduated in May from the University of South Florida and holds dual degrees – a master’s degree in sports entertainment and a master’s in business administration (MBA).