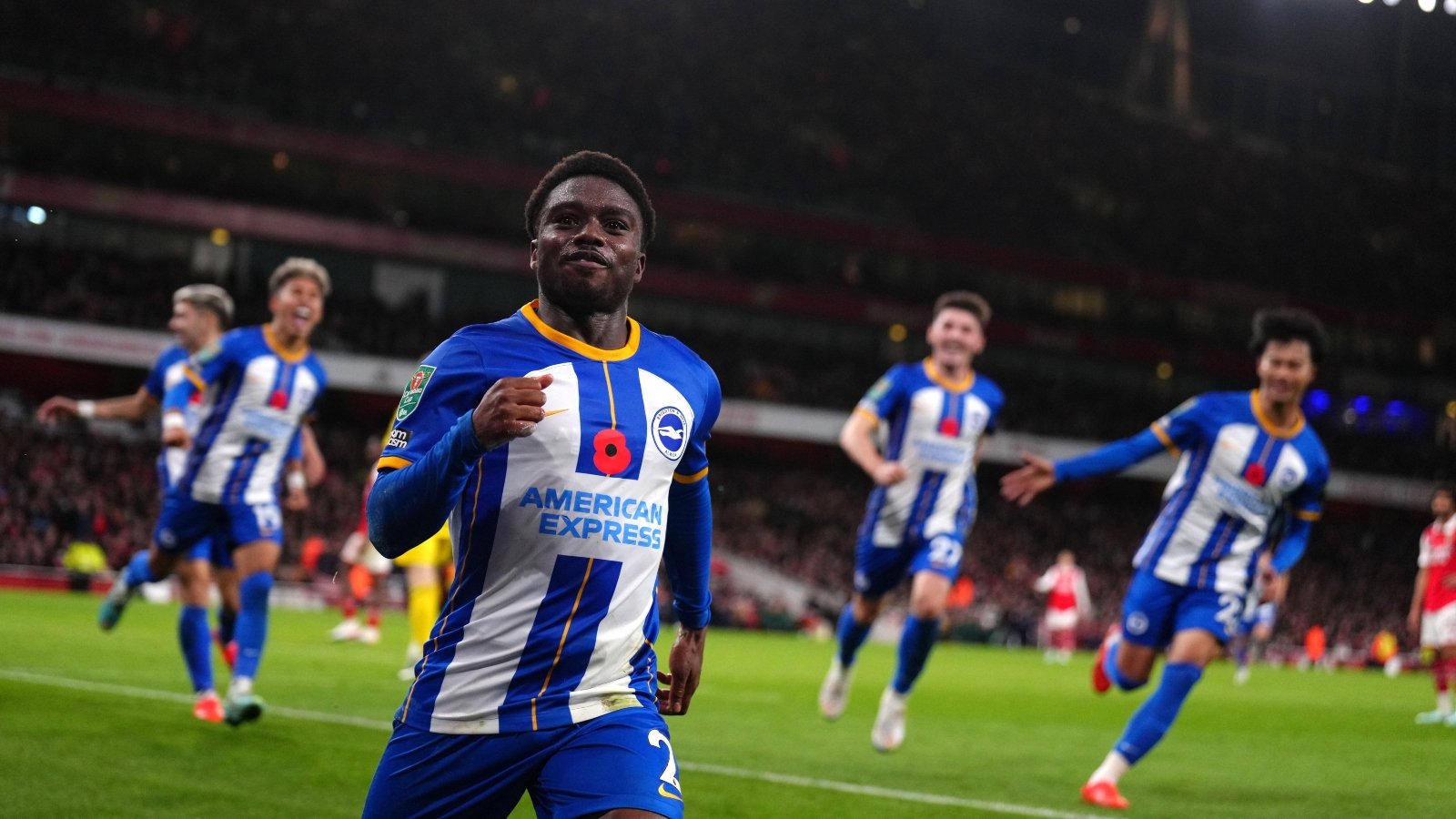 Tariq Lamptey leads Brighton in celebrating a goal in the match. | PHOTO: Courtesy |

After losing 3-1 at home to Brighton & Hove Albion, Arsenal was eliminated from the EFL Cup in the third round. Kaoru Mitoma and Tariq Lamptey both scored in the second half.

Even though they dominated for significant stretches at Emirates Stadium on Wednesday, the Gunners fell for just the second time in their last 20 appearances in the competition’s third round.

Eddie Nketiah’s opening goal had been cancelled out by Danny Welbeck’s penalty in the first half, but Mitoma and Lamptey scored goals in quick succession in the second half to put an end to Arsenal’s nine-game home winning streak.

After Jeremy Sarmiento and Julio Enciso both missed with their shots, Arsenal finally scored in the 20th minute when Reiss Nelson connected with Nketiah, who curled a wonderful first-time finish past Jason Steele.

Welbeck was hauled down by Brighton’s rookie goalkeeper Karl Hein, but the striker calmly scored the resulting penalty kick into the bottom-right corner.

After the break, Nketiah’s right-footed effort hit the left post before Steele made a reaching save to deny Nelson’s header.

Sarmiento moved in the centre before cutting back for Mitoma, who sent a right-footed shot from inside the box into the bottom-right corner to give Brighton the lead.

Soon after, former Chelsea defender Lamptey put the game away by drilling beneath Hein after Billy Gilmour set him up. 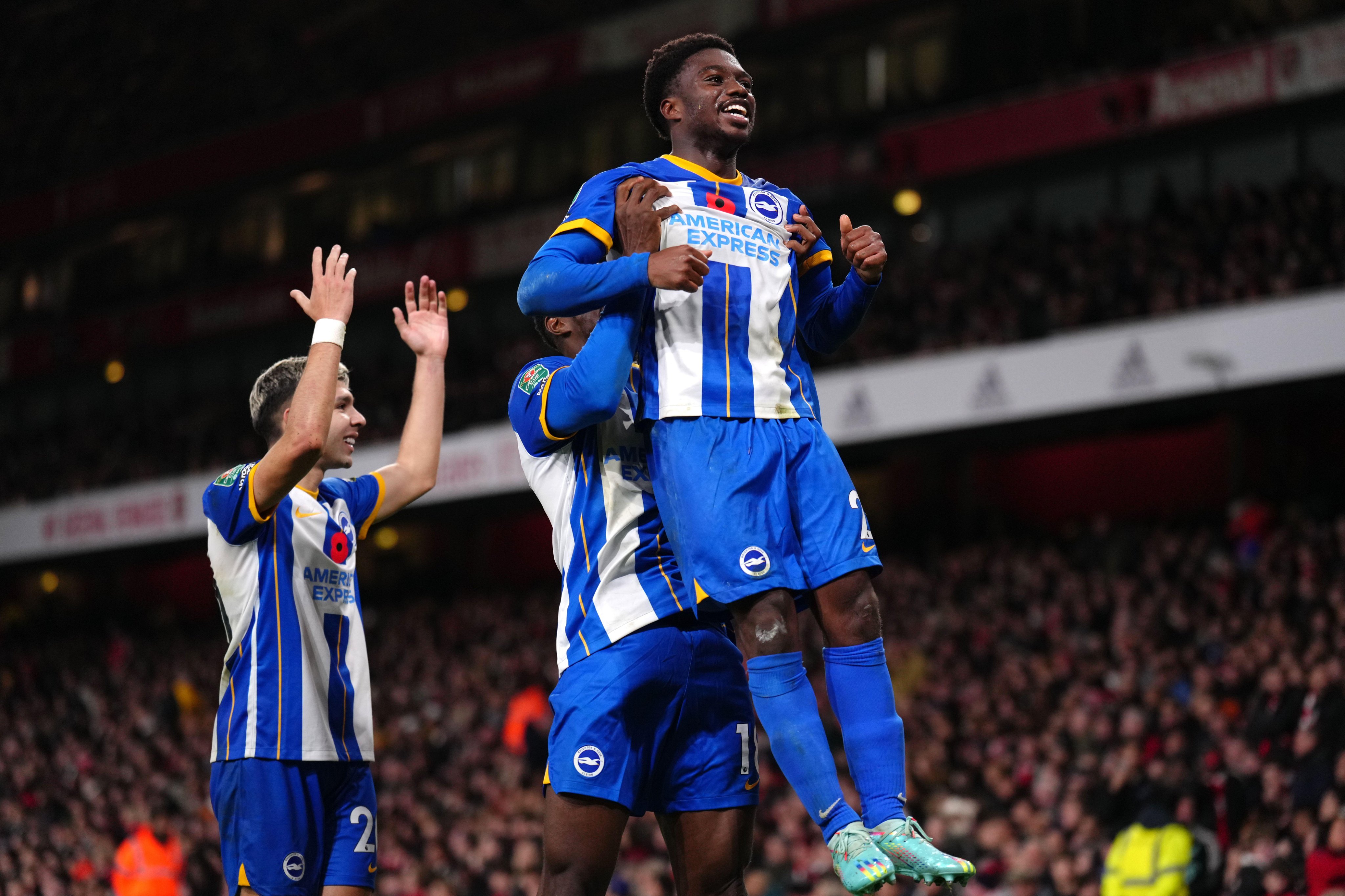 Brighton players celebrate after Tariq Lamptey scored the second against Arsenal in the EFL Carabao Cup at Emirates on Wednesday Nov 9 2022. | PHOTO: Courtesy |

Since joining the Premier League in 2017–18, Brighton had lost all five of their matches against Premier League opponents in the EFL Cup. However, they put on a determined performance to defeat Arsenal once more.

Between November 1979 and May 2019, the Seagulls lost all eight of their prior visits to the Gunners. However, they have already won three of their past four games there.

Although Arteta’s team will be disappointed to exit the EFL Cup at such an early stage, they have much more important responsibilities to concentrate on as they battle for Premier League and Europa League honours.

Welbeck used all of his knowledge to force Hein into a penalty in the opening period, which he calmly converted by sending the goalkeeper the wrong way.

The striker, who returned to haunt his former team, became the only player to score at Emirates Stadium with four different clubs (Manchester United, Arsenal, Watford, and Brighton). 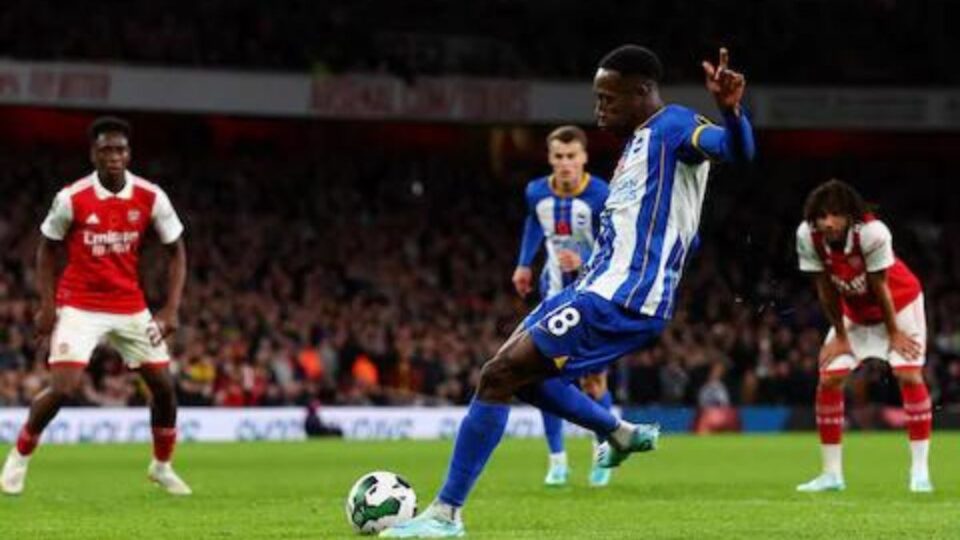 Brighton forward Danny Welbeck scored the third against Arsenal from the spot in the EFL Carabao Cup clash. | PHOTO: Courtesy |

Hein had to wait for his first opportunity at Arsenal after joining from FC Nomme United after leaving his home Estonia in 2018.

However, when called upon, the 20-year-old goalkeeper was ineffective. His mistaken decision to rush out before slipping to bring down Welbeck gave Brighton a chance to tie the game after falling behind by one goal.