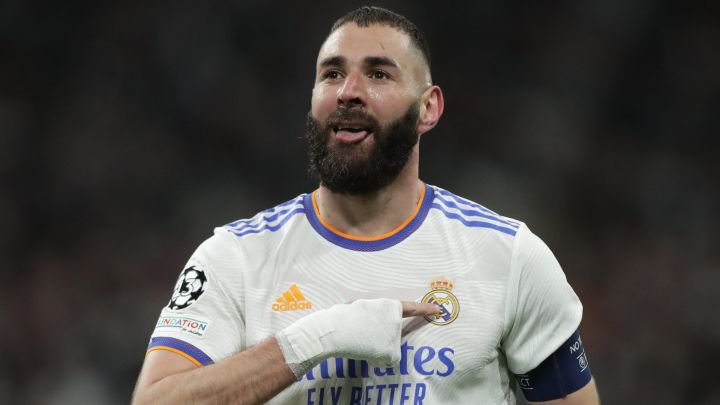 The talismanic striker has been out of action since mid-March, having suffered a calf injury during Real Madrid’s win over Mallorca – in which he scored a brace (obviously), he has since missed the international break with France due to the injury.

Due to this ailment, Benzema was not a part of Los Blancos’ team who suffered an embarrassing 4-0 defeat to a resurgent Barcelona in their last La Liga game and was also unavailable for France during the international break.

Real Madrid forward Karim Benzema is expected to be fit ahead of the UEFA Champions League clash with Chelsea on Wednesday, 6 April 2022. | PHOTO: Getty Images |

Now, however, the forward looks to be on the road to recovery. Marca is reporting that Benzema is finally back in training and ramping up his workload with this weekend’s La Liga meeting with Celta Vigo scheduled to be his first game back.

That means that Benzema will be ready for Wednesday’s heavyweight clash with Chelsea in the Champions League.

The French forward was the hero for Los Blancos in their dramatic comeback win over Paris Saint-Germain in the last round of the competition, scoring a hat-trick in the final 30 minutes of the game to secure Real Madrid’s place in the quarter-finals.

Benzema has enjoyed a stellar 2021/22 campaign thus far, scoring 32 goals across all competitions and assisting a further 12.

Real Madrid will rely on Benzema to lead them against the Blues who are the defending champions in the Champions League and knocked out Real Madrid on their way to the silverware last season in the semi-finals.

Last season, the two sides drew 1-1 at Madrid before Chelsea eased past the La Liga leaders in London with a 2-0 victory to seal their place in the final which was played in Porto Portugal. The Blues defeated Manchester City 1-0 in the final to lift the trophy for the second time in the club’s history.