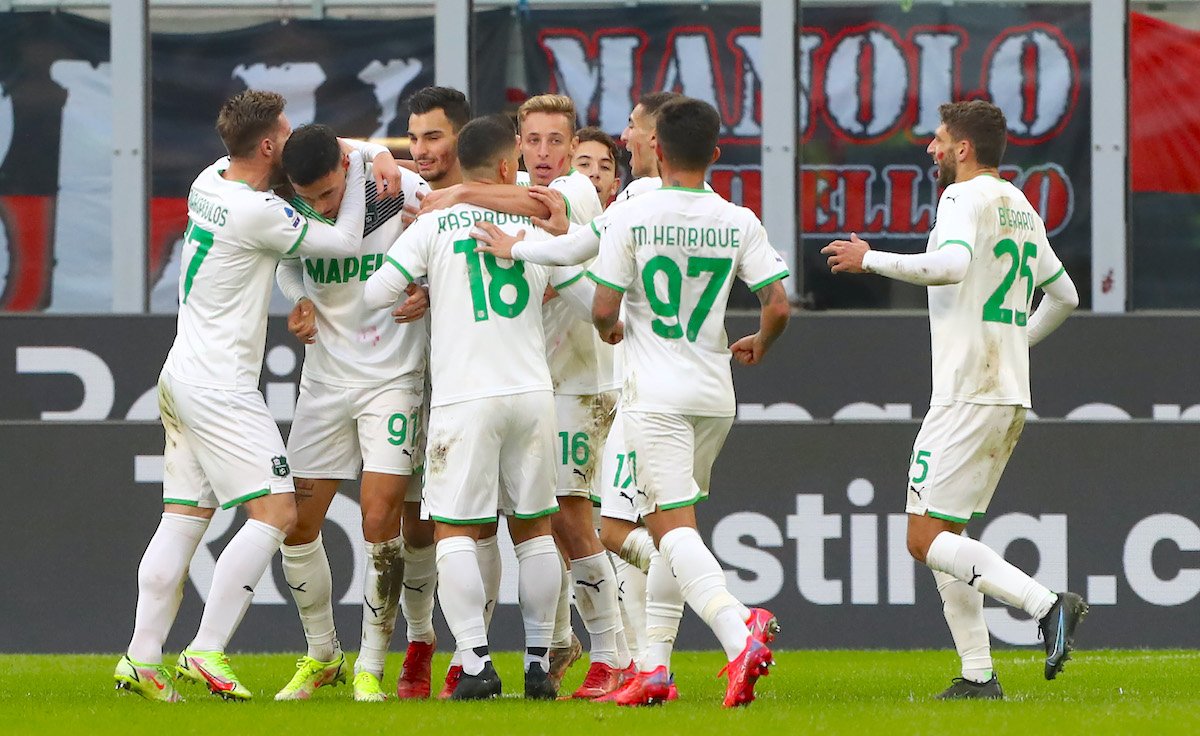 Alessio Romagnoli’s strong header had been Milan’s reward for a strong start, but Gianluca Scamacca’s excellent long-range strike and an own goal from the unlucky Simon Kjaer helped mid-table Sassuolo reach the interval with a lead.

Berardi finished off Milan with a fine goal in the 66th minute, the Italy international showing his class to outwit Romagnoli before beating Mike Maignan.

A red card for Milan captain Romagnoli for bringing down Gregoire Defrel with effectively a rugby tackle compounded a bad day for Milan, who began the day level on points with leaders Napoli.

Zlatan Ibrahimovic was heavily involved in the opening exchanges and a dominant Milan had Sassuolo where they wanted them, pegged inside their own half. 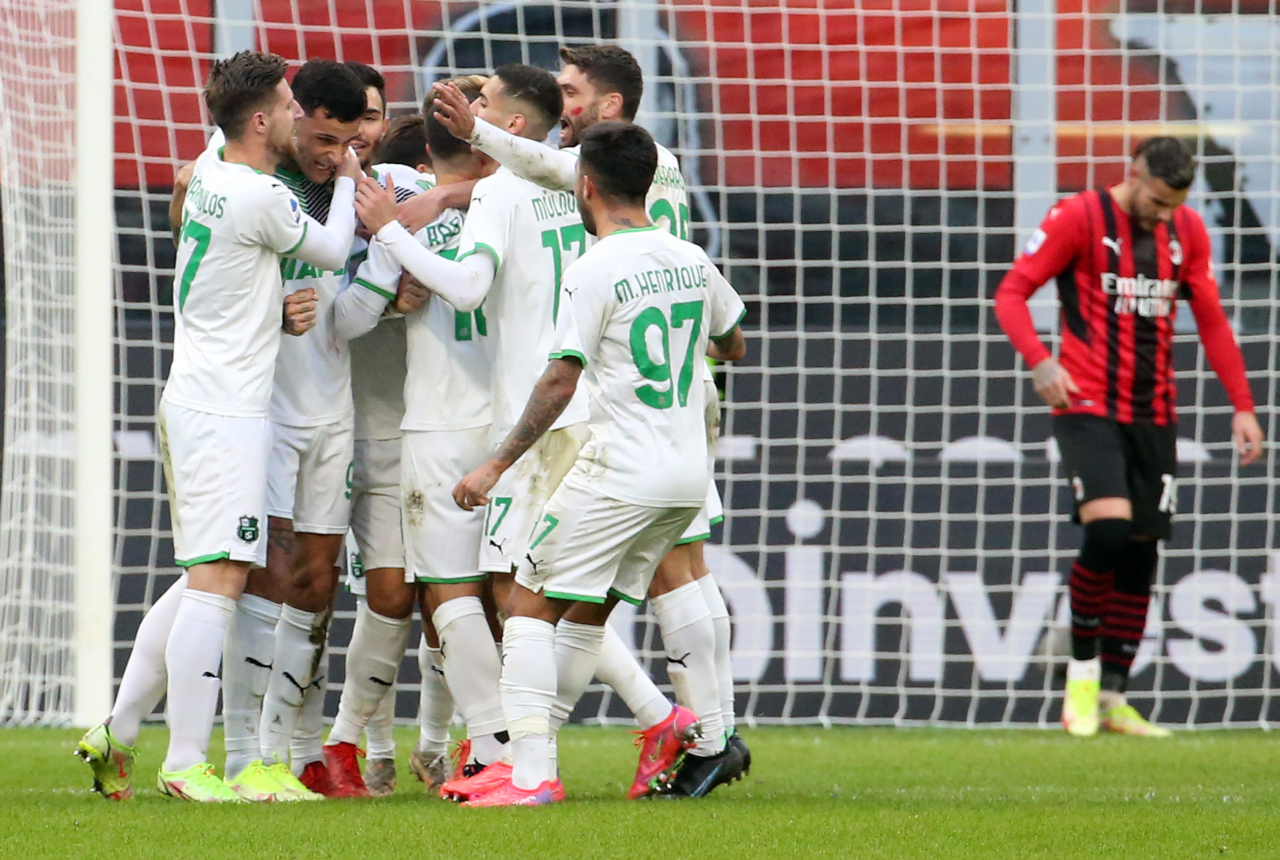 Sassuolo players celebrate after scoring the third goal against AC Milan in a Serie A clash at the San Siro on Sunday, 28 November 2021. | PHOTO: Getty Images |

The expected breakthrough came in the 21st minute, with Theo Hernandez’s cross from a short corner on the left headed in at the near post by Romagnoli.

Milan had avoided defeat in their last 13 Serie A matches when scoring the opening goal, but here they were shut by an equaliser within three minutes. Scamacca was left with space to shoot from 25 yards and found the top right corner, scoring via the underside of the crossbar.

Sassuolo went ahead with a freakish goal in the 33rd minute. A goalline clearance by Hernandez reached Scamacca after a corner caused havoc, and he hit a fierce shot from 10 yards that pinged firstly off goalkeeper Maignan and then into the net off Kjaer, who was standing in close attendance.

Milan started the second half full of purpose but lacking in potency and their fizz soon went flat. 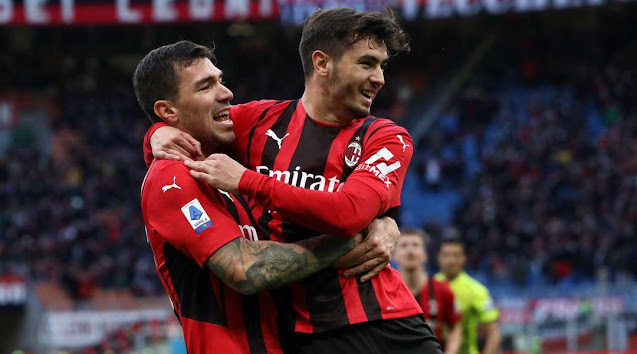 Berardi capitalised with a goal that showed him at his best, skilfully sidestepping Romagnoli in the penalty area before shooting through the legs of Maignan for his seventh goal of the season.

Romagnoli could have no complaints about his sending-off for denying Defrel a run through on goal in the 77th minute, completing a miserable day for the Rossoneri.

After following up a 4-3 loss to Fiorentina with a dreadful display here, Milan is having a worrying stumble and reigning champions Inter are in hot pursuit, just as they were around this time last year after another fast start from the Rossoneri. Inter soon took control of the title race.

This was not the performance of a team with serious title aspirations, and the fifth red card of Romagnoli’s Serie A career summed up their day. Sassuolo’s attackers carried the greater verve, outmatching Ibrahimovic and his supporting cast.

There were high hopes at Milan that this might be their season as they seek a first Scudetto since the 2010-11 season. Now, however, after following up a 1-1 draw with Inter and the Fiorentina loss with another defeat, they are in a rut.

This was the first time they have lost after scoring the opening goal in Serie A since April 21, when it was also Sassuolo who came from behind to take the points. Milan lost to Lazio in the game after suffering that blow, but had avoided successive losses since then until Sassuolo came calling again.

Each team finished the game with 15 shots to their name, but Sassuolo led 5-2 on shots on target and in Berardi and Scamacca they had the two outstanding forwards on the field. They both had a game-high four shots, both hitting the target twice.

Maignan had to make three saves to keep the score down. Ibrahimovic won one of five duels, while Berardi won seven of 13, and that was a factor in how the game played out.

Both sides will be back in action in the midweek as Milan travel to Genoa for a Wednesday evening Serie A assignment, while at the same time Sassuolo host Napoli.