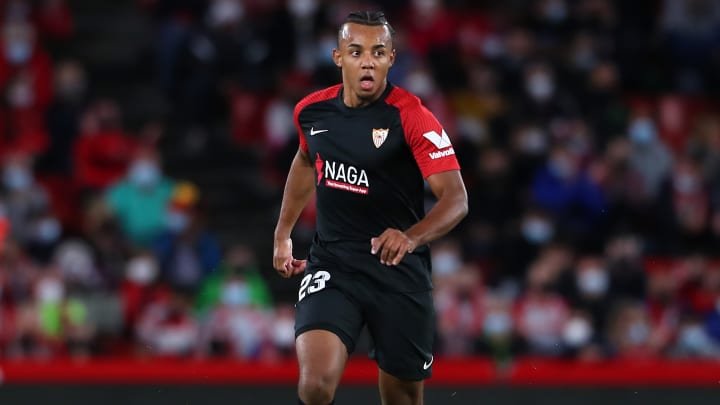 Sevilla Football club president Jose Castro has warned Premier League side Chelsea and other suitors of center-back Jules Kounde that the France international will not be sold for cheap.

The reigning Champions League winners were chasing Kounde in the summer and believed they had secured a deal for around £45m – $61.9m, only to see Sevilla refute the interest late on in the transfer window. Despite that, Chelsea are highly expected to return with a fresh bid in the next transfer window, but both Manchester United and Real Madrid are also keen on landing Kounde as well.

Their hopes of getting a deal done appeared to be given a boost earlier this week when former Sevilla president Jose Maria del Nido told Spanish media Cope that the club were ‘ruined’ financially and debts are flowing out of control, but Castro quickly ran to the media to bite back.

Chelsea was willing to part with £45m in summer to land Jules Kounde from Sevilla. | PHOTO: Soccrates Images/GettyImages |

“To say that the club is ruined is ridiculous,” Castro told AS. “Last season we had a surplus, after a season without season tickets or ticket sales.

“Yes, the losses would have been solved by selling Kounde, but we showed that we are financially powerful by not accepting €50m – $68.8m. To say that the club is ruined is not caring for the club.”

Sevilla made it clear to Chelsea that the only way Kounde will leave the Ramon Sanchez Pizjuan Stadium would be if the London side gets significantly closer to his release clause, which is €80m (£68m or $93.5m).

A bid of £60m was rumored to be enough to get a deal done, but Chelsea declined to go that high, particularly given Trevoh Chalobah’s transition from academy star to first-team option.

With first-team defender Antonio Rudiger’s future beyond this season proving to be unknown and Thiago Silva recently turning 37, Chelsea is expected to return for Kounde. But Real Madrid is growing increasingly confident of landing Kounde’s signature and Chelsea’s league rivals United continue to be linked despite landing Raphael Varane in the summer.

Kounde has been in impressively excellent form for Sevilla so far this season, helping the team keep clean sheets in four of his eight appearances.  He has also featured for the France national team helping Les Blues to a UEFA Nations League triumph earlier this month.