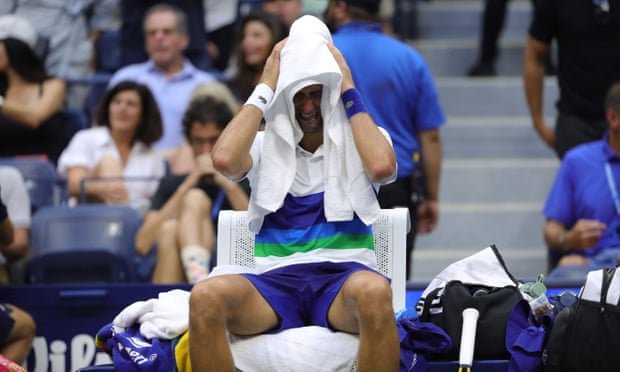 Novak Djokovic’s loss at the U.S Open 2021 to Daniil Medvedev is a strong pointer to the entry of new rulers on the court.

The Serbian tennis player lost his bid for yet another Grand Slam title after a fierce game with Medvedev Sunday during the men’s singles final at the U.S Open 2021 in New York.

The Russian unleashed calculated moves to beat the world No.1 player in straight sets 6-4, 6-4, 6-4 in the finals.

Medvedev, 25, was impressed by winning all sets except one which he fought hard to win.

It was a big match for the men’s singles finals. But, how did Medvedev manage to bet the world No.1 star? 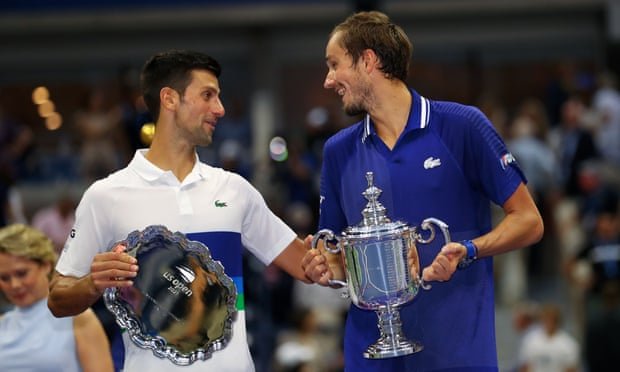 Novack Djokovic with Daniil Medvedev after the U.S Open 2021 in New York. [The Guardian]

The Russian was conventional throughout the game. His unorthodox playing style came with great efficiency and great service motion. This was part of what compounded Medvedev’s victory against Djokovic who hoped to win another Grand Slam title this year.

Throughout the match, Medvedev was the superman returning the ball with the same intensity it came with and lots of precision and consistency.

A good look at his racket also carries a lot of his success. It was angled for forwardness other than lateral returns of the ball. Pundits further state that his flat serves coupled with his body frame and the slight bended knee gave speedy serves of 196 kmph.

Down the T tactic worked magic for the Russian in deflating Djokovic’s sustained pressure. It is a skill used by players when they are in doubt.

Djokovic while holding a joint press conference with Medvedev acknowledged this super tact. He opined that Medvedev hit his spots so well earning him free points.

At the end of the game, the Russian bagged 22 points and 9 aces for his great tackle. His servings alone earned him a dozen free points putting Djokovic under intense pressure.

“He was hitting his spots very well. If you’re playing someone like Medvedev who hits his spots so well, just aces, gets a lot of free points on his first serve, you’re constantly feeling pressure on your service games,” Djokovic noted.

In total, Medvedev earned points from 22 unreturned serves and 16 aces fired throughout the game.

One more thing that secured Medvedev victory was his well-thought retuning position. It was strategic and to his advantage. He positions himself 2 m from the baseline and his lean body gave him great lateral swings.

His counter returns showed great defense mastery and it earned him a lot of points in the U.S Open men’s singles final. He kept the baseline distance in 25% of the sets he played Djokovic who showed great resilience.

It was a hard game for the Serbian player for the first time in the U.S Open 2021. In six other matches he played his opponents, he broke their zeal in the second game of the second set. And it was constant.

With Medvedev, he tried this but he proved to be a strong opponent who wouldn’t break. He counterpunched with two direct aces.

What followed was an intense game filled with the best of tacts there is in the tennis world. Evidently, both players gave it their all but Medvedev carried the day.

Throughout 2021 Djokovic has featured in big tournaments with the culmination being the U.S Open 2021. This, he says took a mental toll on him such that he was drained and slow in his final game with the Russian.

A testament to the emotional stress he was through, Djokovic shed tears after the ninth game of the third set.

Seated with a towel on his head, he gnashed his teeth as tears rolled down his cheeks. It was now time to deflate all that pressure and for a reigning champion, it was not easy at all.

While addressing the press, he confessed to feeling the burden of mental stress due to highs take games he has played since then.

“Also emotionally, very demanding period for me in the last five, six months. Slams and Olympics and playing at home in Belgrade.

“Everything was coming together for me here and kind of accumulating all the emotions that I’ve been through.”

But, even as he lost the title to Medvedev, fans who thronged for his final match in New York chanted his name all through. You would have thought that he was the winner.

Despite it all, he lives to fight another day. For now, he is content that he gave it his best and appreciates the amount of fan support he has.