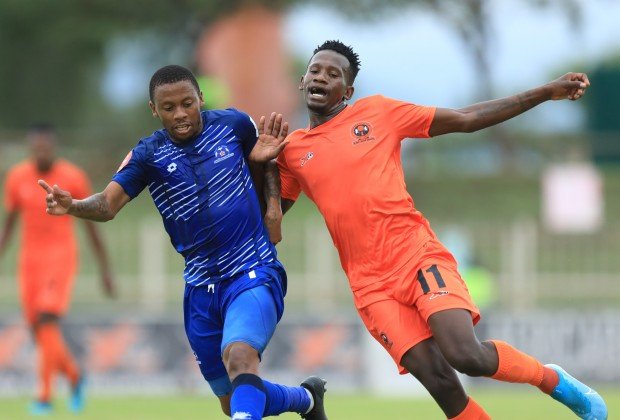 In a game of limited scoring opportunities, visiting Maritzburg City ran out slender 1-0 winners over Polokwane City in a PSL Absa Premiership match at the Old Peter Mokaba Stadium in Polokwane, on Sunday afternoon.

Straight from the kick-off, Maritzburg relied mainly on a short passing game to take play into the opposition half but they often lost their way around the fringes of the penalty area.

When striking opportunities beckoned, they seemed far too casual in the striking zone and the Polokwane goals were never really threatened.

The halftime match statistics showed that Maritzburg failed to land a single shot on target.

At the outset, Polokwane battled to pick up cohesion but kept their challenge alive with individual sorties into the Maritzburg half. However, often wayward passing in the final third put paid to possible scoring chances.

Each side enjoyed one close-in free-kick but were able to capitalise and these were probably their best chances of cracking the opposition defence from set-piece play.

As the first half wound its way to halftime, Polokwane enjoyed the lion’s share of possession and they threatened briefly when Salulani Phiri was fractionally wide of the target after a fine bout of passing in the build-up, just ahead of the break.

Polokwane started the second half with purpose but against the run of play, visitors Maritzburg managed to open the scoring through Yusuf Jappie after Polokwane were blown up for a foul just outside their penalty area. Jappie’s curling free-kick over the wall left Polokwane’s Zimbabwean goalkeeper George Chigova flat-footed and glued to his goalline, just ahead of the hour mark.

Two minutes later, Polokwane were presented with a chance to equalise when they were awarded a free-kick in an identical position at the opposite end of the ground. Jabulani Maluleke’s shot thundered off the crossbar and Maritzburg were let off the hook.

In the ensuing play, a corner and a close-in free-kick presented Polokwane with the platform to claim an equaliser but the Maritzburg defence held out with solid central defence.

Four minutes from the end, Maritzburg’s Judas Mosemaedi was given a free header as he rose well to connect with a goalmouth cross from the right, but his effort ballooned high over the crossbar.

The match enjoyed a dramatic finish when both sides came within a whisker of scoring in the dying minutes.