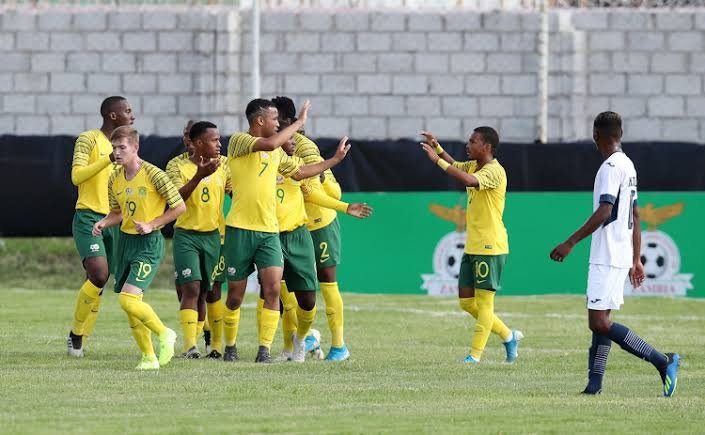 Defending champions South Africa and Madagascar drew 1-1 in their Cosafa Under-20 men’s Championship Group B clash in Lusaka on Sunday, potentially setting up a thrilling end to the pool.

Avizara Soloniaina put the Malagasy in front early in the second period, but Sinenjongo Mkiva equalised late on to seal a precious point for the South Africans.

South Africa now face a final group clash against Lesotho on Tuesday at the Nkoloma Stadium where victory should seal their passage to the semifinals.

The pools are decided on a head-to-head basis, but as South Africa and Madagascar drew their match, the two will have to be separated by goal-difference.

South Africa are on +5, with Madagascar on +3, though they have potentially the easier final game against fellow islanders Mauritius at Sunset Stadium.

The clashes will kick off simultaneously at 3.30 pm.

Should both teams win, they could yet each advance as group winners and the best runners-up.

For the Lesotho clash, the defending champions will be without the livewire Oswin Appolis – the Player of the Match against Mauritius – after getting a second yellow card in the tournament.

The Mauritians and Lesotho played to a 2-2 draw in the other game in Group B, with the Islanders grabbing a late equaliser to secure a point.

In Group C, eSwatini made it two wins from two to set up a showdown for the top spot in the group when they beat Seychelles 1-0 in the opening game of the day.

eSwatini will now face Angola in their final pool match on Monday, with the winner advancing to the semifinals as the top team in the group. A draw will see Angola go through due to their superior goal difference.

In the other match in the pool, already-ousted Mozambique and Seychelles will play for pride when they meet at the Sunset Stadium. Both have lost two from two and this presents them with a chance to leave Zambia with a morale-boosting win.

Group A will also conclude when there is another winner-takes-all tie between Zambia and Malawi at the Nkoloma Stadium at 3.30 pm.

A draw will be enough to see Zambia advance in the top spot, while defeat would put Malawi through and leave the host nation hoping they can qualify as one of the best-placed runners-up.

Zambia will be heavy favourites as they have scored seven goals in their two Group A matches without conceding at the other end.