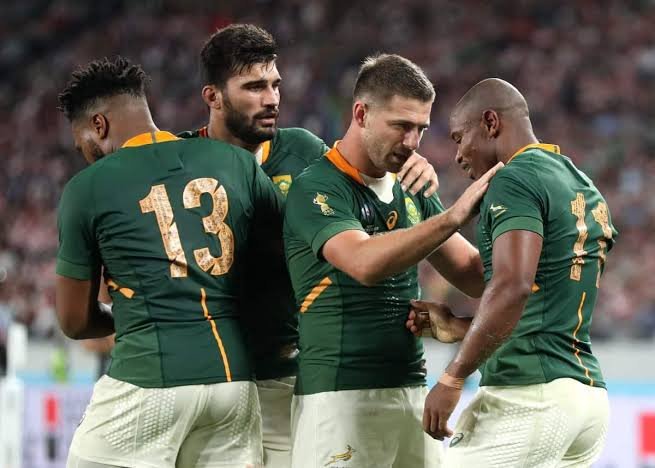 South African Rugby World Cup superstars Lukhanyo Am, Makazole Mapimpi, Tendai “Beast” Mtawarira and Herschel Jantjies will be in action for the Barbarians when they take on Fiji for the Killik Cup at Twickenham, Brazil in Sao Paolo and Wales at the Principality Stadium as part of the invitational side’s November international tour.

In a twist, for their opening match against Fiji, they will be coached by World Cup finalist coach Eddie Jones, whose England team fell to the ruthless Springboks performance in the Rugby World Cup 2019 final in Yokohama last weekend.

With a Rugby World Cup medal to add to his 117 caps, Mtwarira will be looking to bring the same skill in the scrum that England struggled to manage to the Barbarians’ matches. Meanwhile, Mapimpi will hope to add to his 2019 haul of tries, including the six during the Tournament that saw him secure joint-top try-scorer alongside Welsh wing Josh Adams.

Jantjies, the exciting new scrum-half, only made his debut for the Springboks in July of this year, scoring four tries in his first four internationals. His stunning opening form as an international led to his nomination for World Rugby Breakthrough Player of the Year.

For centre Am, making his debut for the Barbarians will cap off an incredible year in which he has gone from strength-to-strength, becoming the undisputed form 13 in Super Rugby and his country’s first-choice outside centre.

These four newly-crowned World Champions are the latest names in an all-star squad also featuring Irish legend Rory Best, who will play all three matches to conclude his international career and French star Mathieu Bastereaud.

Fellow Springbok legend and Barbarians veteran Morne Steyn will also join up with the squad, teaming up again with Mtawarira whom he made his Barbarians debut in 2009 against the All Blacks in a famous 25-19 win with Bryan Habana’s hat-trick of tries.

The South African contingent bring an enviable combination of experience and talent to the Barbarians, who kick off their November tour against Fiji for the Killik Cup on Saturday 16 November. A bumper crowd of over 50,000 is expected.