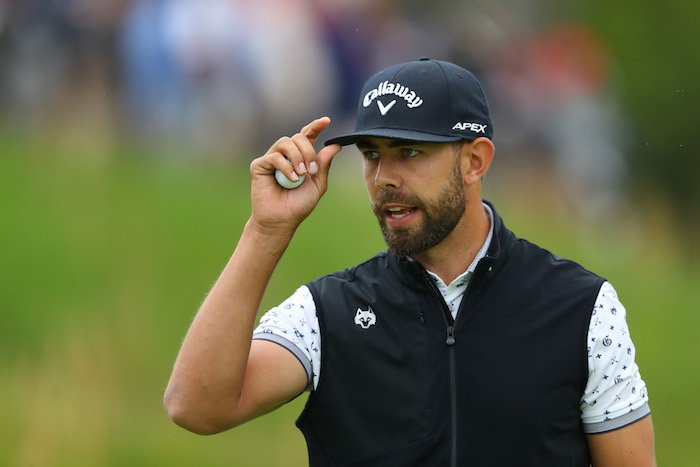 South Africa’s Erik van Rooyen carded a bogey-free round of seven-under 65 to set the clubhouse target on day one of the Real Czech Masters in Prague on Thursday.

Last season’s European Challenge Tour Graduate of the Year has shown no signs of a sophomore slump in his second European Tour campaign, with two-second places and a top-10 at the US PGA Championship for his best finish in a Major.

He continued that fine form with seven birdies at Albatross Golf Resort to move to seven-under and lead by one from Dane Joachim B Hansen, Finn Kim Koivu, Chile’s Hugo Leon, Italian Edoardo Molinari and England’s Callum Shinkwin.

Shinkwin set the early pace from the second group of the day off the tenth, birdieing the 12th, 13th, 15th, 16th and 17th to turn in 31. Further gains followed at the first and second but when he dropped a shot on the sixth, he had left the door ajar for the rest of the field.

Van Rooyen was making a steady move with birdies on the tenth, 15th, 18th and first and, when he spun an approach to tap-in range on the second, he was just one back.

An approach to five feet at the sixth put the South African in a share as Shinkwin set the target and when Van Rooyen birdied the par-five ninth from similar range, he was the solo leader.

Playing partner Molinari also birdied the ninth to complete a bogey-free effort, the highlight of which was a long putt on the third to add to gains on the 11th, 17th, 18th and seventh.

Hansen made a hat-trick of birdies from the fourth to turn in 33 and added further gains on the tenth, 12th, 14th and 16th to surge into a share of the lead before bogeying his final hole.

Leon made a perfect start with an eagle at the par-five tenth and he added birdies at the 14th, 15th, first and fifth to sit in what was a four-way tie for the lead. He bogeyed the seventh but made a fifth birdie of the day on the ninth.

Koivu was bogey-free in his round, picking up shots on the 11th, 13th, 16th, first, fourth and sixth.

In form, Wiesberger turned in 31 with birdies at the tenth, 12th, 15th, 16th and 17th and added further gains at the first and fifth but gave them back at the second and seventh.

Pieters – who won his maiden European Tour event here in 2015 – played nice approaches to the second and fourth to go with birdies on the tenth, 11th, seventh and ninth, dropping his only shot on the 18th.

Scrivener went out in the very first group of the day from the tenth and combined six birdies with a single bogey.

Defending champion Andrea Pavan turned in 32 with gains on the tenth, 12th, 15th and 18th but the Italian parred his last nine holes to sit at four-under, alongside South Africans Bryce Easton and Zander Lombard.