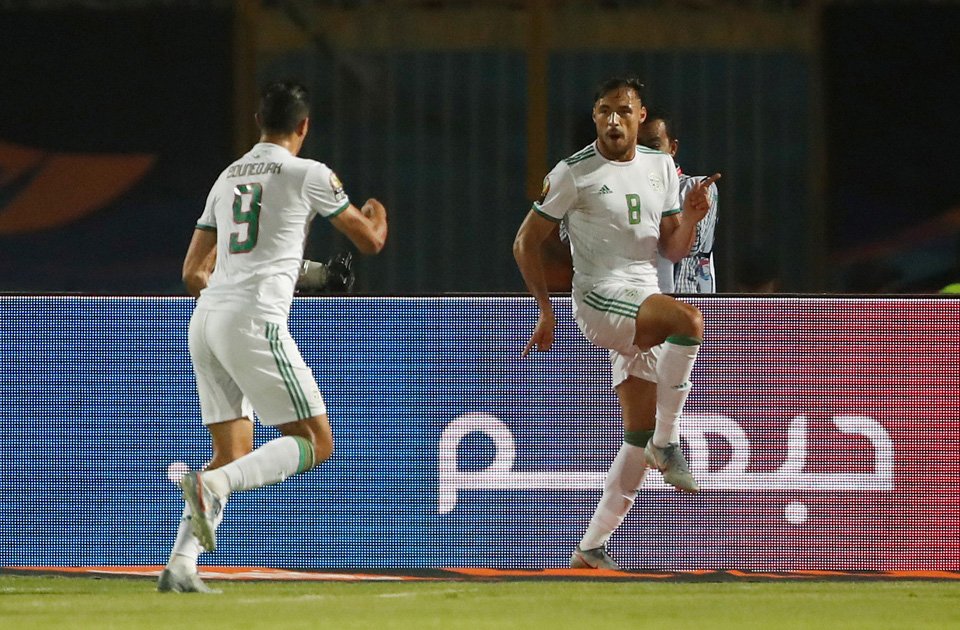 Algeria’s Les Fennecs put up a flawless performance to thrash Guinea’s Syli Nationale 3-0 in a Round of 16 match at the 30th June Stadium in Cairo on Sunday night to progress to the quarterfinals of the Total Africa Cup of Nations Egypt 2019.

Youcef Bellaili gave the North Africans a 1-0 halftime lead before skipper Riyad Mahrez and substitute Adam Ounas sealed the tie in the second half.

In the quarterfinals slated for Thursday 11 in Suez, Algeria will take on the winner between Côte d’Ivoire and Mali who play in their Round of 16 tie on Monday.

Algeria went to the break a goal up when Belaili side-footed the ball past Guinean keeper Ibrahim Kone from a tight angle.

The midfielder played a quick one-two with burly striker Baghdad Bounedjah before he broke into good shooting range, planting the ball into the bottom left corner of the Guinean goal.

Algeria looked the more dangerous side all game and came close twice with Bounedjah being the thorn in Guinea’s flesh.

The burly attacker who plays his club football in Saudi Arabia came close in the ninth minute but his effort was just wide.

Earlier, Adlane Guedioura had threatened with a low free-kick from the edge of the box but it went wide.

Guinea’s only meaningful chance at goal in the opening half was in the 21st minute when Martinez Kante took an aim at goal from distance but his effort was wild and high.

Algeria then put the game to comfortable distance just 11 minutes into the second half, punishing Guinea for another lapse in defence off a throw-in. Ismael Benaccer picked the ball on the left before whipping in a decent cross.

Mahrez picked it up on the other end, taking a nifty touch to shake off Issiaga Sylla before swinging the ball to the left. Keeper Kone made a decisive save with his feet just four minutes later to deny Mahrez his brace after he was played through by Bounedjah.

Algeria kept their composure and dictated play, sealing the victory with nine minutes left after Ounas swept home a cross from Youcef Atal after the defence struggled to clear.