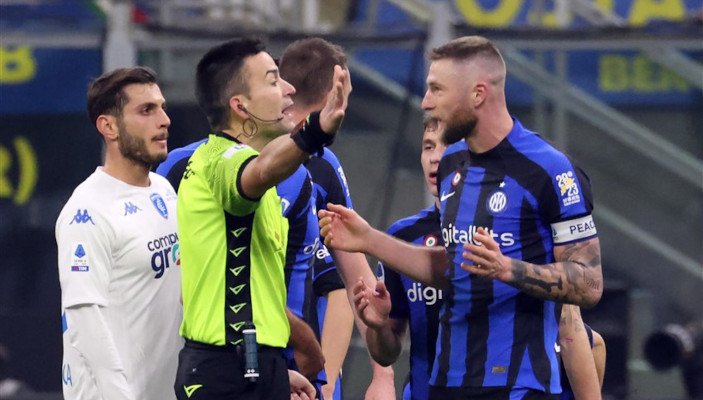 Milan Skriniar was sent off in the clash against Empoli. | PHOTO: Football Italia |

After winning the Supercoppa Italiana, Inter suffered a severe 1-0 loss to Empoli on Monday at the San Siro, which sent them back to earth.

Following last week’s thrashing of rivals and champions Milan in Saudi Arabia, Simone Inzaghi’s team appeared to be poised for a strong second half of the season.

However, when Milan Skriniar was sent off in the first half, the Nerazzurri’s return to Serie A play saw them hopelessly out of sorts and defeated by a goal from a teenager named Tommaso Baldanzi.

Due to Juventus’ points deduction, losses like this may not now harm Inter in the fight for Champions League qualifying, but any remote title dreams appear to have been swiftly put to rest.

Skriniar’s dismissal summed up inter’s chaotic first half. After Nicolo Cambiaghi’s shaky attempt at a save from Andre Onana, Henrikh Mkhitaryan almost avoided punishment when his high boot caught Francesco Caputo’s head in the ensuing corner. 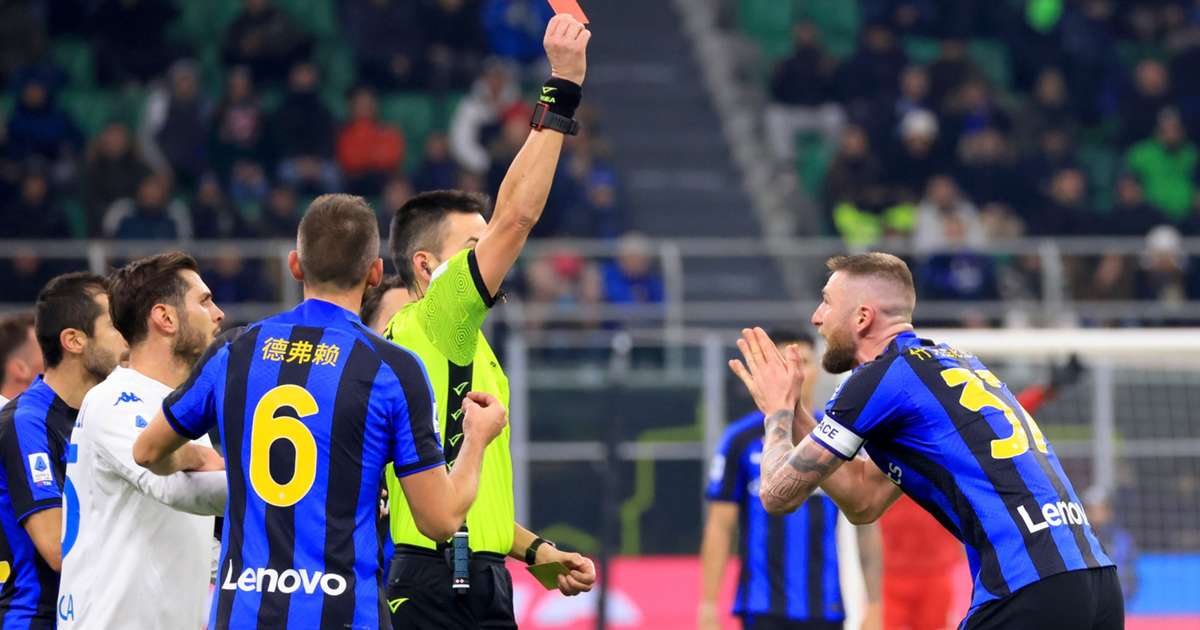 Inter Milan defender Milan Skriniar was sent off in the Serie A clash against Empoli. | PHOTO: Sky Italia |

Caputo carried on despite wearing a bandage. Inter’s only real threat came from Federico Dimarco, who saw a volley brilliantly saved and set up Lautaro Martinez for an awkward wide shot.

The second Inter player to kick Caputo in the head was Skriniar, who had already received a caution. This time, referee Antonio Rapuano saw the foul, which resulted in Skriniar’s dismissal.

After the break, Inter made very little progress and fell behind when Onana, whose poor performance had included yet another unusual stop, was outmuscled by a shot that was directed directly at him by Baldanzi.

In a frustrating conclusion, Inter proved as unimaginative in attack as they had been hopeless at the back. Stefan de Vrij headed against the post from inside the six-yard box.

Empoli had only ever defeated Inter once in Serie A, and that triumph occurred in 2006. However, it might be difficult to recall too many worse Nerazzurri performances than this one in the subsequent years.

When Baldanzi scored with Empoli’s eighth shot on goal, Inter could not claim they had not been warned. However, Inzaghi’s team—who were already playing without Skriniar—then completely lost their composure, costing them any chance to get back into the game.

Empoli midfielder Tommaso Baldanzi celebrates after scoring against Inter Milan in the Serie A. | PHOTO: EuroSport |

Nicolo Barella, who was furious and on the verge of receiving a second yellow card, was replaced, leaving one of the players most capable of upending Empoli to watch from the sidelines as his teammates fought to the end.

At Inter, Onana has earned the starting position but has not yet won over the team. He has let up 1.4 more goals than anticipated this season, per expected goals on target (xGOT) stats.

Onana once again let Inter down in that aspect with this. He faced eight shots on goal, which is more than any other Serie A player has ever faced, yet the shots only had a total value of 0.5 xGOT. He should not have given in to any of them, let alone the one who managed to sneak in.

Without Skriniar, Inter will have the opportunity to get back on track this weekend when they visit winless basement side Cremonese.