Why is Dale Earnhardt Sr. so popular? Why is Dale Earnhardt Sr. so popular? Photo/ Sportscasting.

Ralph Dale Earnhardt Sr. was an American professional stock car driver who raced in the NASCAR Winston Cup Series between 1975 and 2001. Ralph is widely regarded as one of the greatest NASCAR drivers of all time, which explains why he is so popular.

Nicknamed “The Intimidator”, Ralph was known for his aggressive driving style, which earned him several championships. Dale Earnhardt Sr. is tied with Richard Petty and Jimmie Johnson for most NASCAR Cup Series titles (7). Ralph was the winner of the first-ever Budweiser Later Model Sportsman Series race in 1982. He led Busch Series in 1986 and Winston Cup Series in wins in 1987 and 1990.

Earnhardt Sr. drove the No. 3 car for the majority of his career. His No. 3 car is associated in fans’ minds with his sponsor GM Goodwrench.

Dale Earnhardt Sr. began his racing career with the Winston Cup in the longest race, the World 600. His first appearance as a professional racer was at the Charlotte Motor Speedway in North Carolina.

The American got his break into racing for the World Cup in Charlotte in 1978. This was after he finished seventh in the Firecracker 400 race.

Dale joined the Rod Osterlund Racing in 1979 for his rookie season, winning one race and finishing seventh in the standings. In his sophomore season, he won several races in Charlotte, Atlanta, Nashville and Bristol.

The talented driver finished seventh in the Richard Childress Racing in 1981. However, the next two years were not easy for him as he recorded the worst performances of his career.

Dale Earnhardt Sr., legendary NASCAR driver, got back on his feet in 1984 as he recorded six wins and finished fourth in one of the races in Martinsville. He won the Winston Cup Championship for the second time in his career in 1986.

Earnhardt Sr. earned the nickname “The Man in Black” in 1988 after he began racing for GM Goodwrench. He won three races that year and five in 1989.

The racing legend won another Winston Cup in 1990. Besides that, he also won the Busch Clash and the Gatorade Twins 125s.

Dale won his next Winston Cup in 1991 after just four wins and 195 points. Three years later, he won another Winston Cup with 400 more points. And that was Dale Earnhardt Sr. last NASCAR Championship.

In 1996, the American racing driver suffered a major accident at the DieHard 500 in Talladega. Despite suffering physical injuries, he was seen racing the following in Indianapolis.

Dale won the Daytona 500 in 1998 after failing to win any race the previous year.

Dale Earnhardt Sr., one of the greatest drivers in NASCAR history, was killed in a three-car crash during the Daytona 500 at Daytona International Speedway. The accident took place on February 18, 2001.

Dale first made a small contact with Sterling Marlin before colliding with Ken Schrader and then hitting the outside wall head-on. 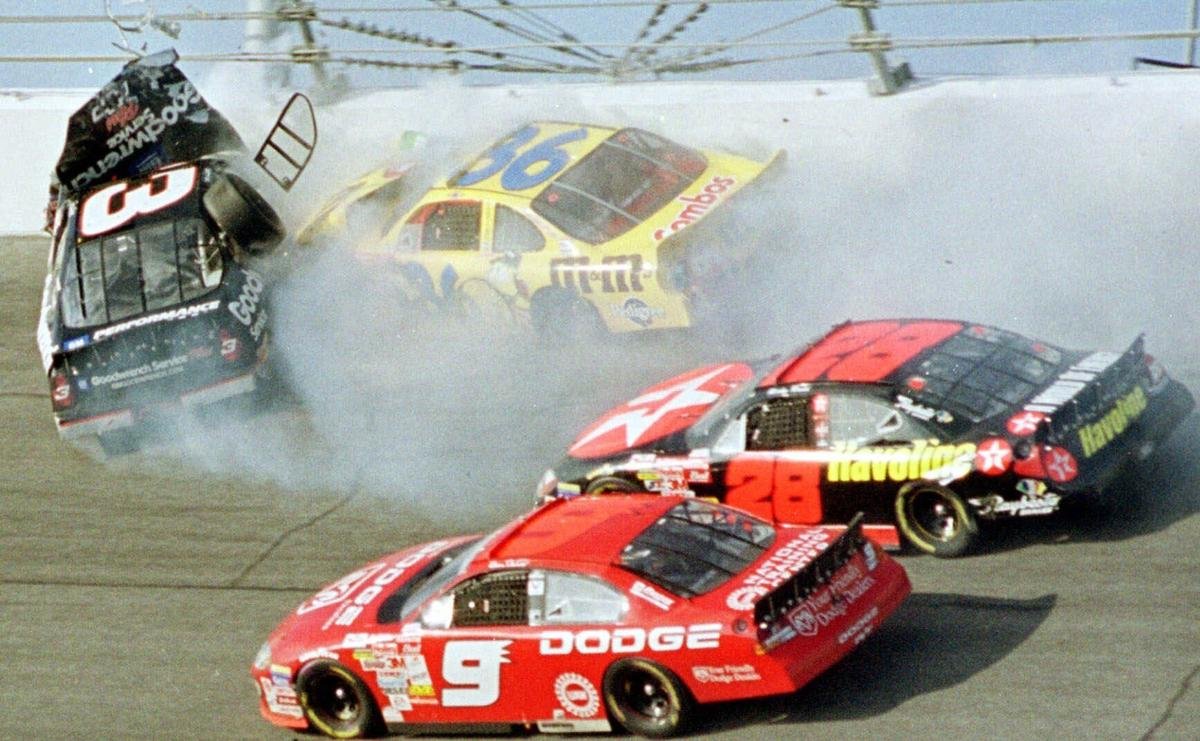 At the time of the crash, Dale’s car was blocking Schrader’s car on the outside and Marlin’s car on the inside. He was rushed to Halifax Medical Center, where he was pronounced dead.

The following day, an autopsy concluded that he had sustained a fatal basilar skull fracture. His remains were interred at his state in Mooresville, North Carolina.

The Earnhardt Tower at Daytona International Speedway was named in his honour one month after his death.