The Central European Rally, which runs from October 26 to 29 across Austria, Germany, and the Czech Republic, is an exciting new addition to the WRC calendar. The city of Passau in southeast Germany will serve as the rally’s headquarters of operations.

The 2023 schedule, which runs from January to November, includes a number of regular stops as well as Mexico and Chile’s first comeback since Covid-19.

WRC Promoter Senior Director of Events Simon Larkin said, “We were highly committed to restoring the WRC schedule back to where it was pre-Covid, with a healthy balance of events inside and beyond Europe.

As previously reported, the WRC has been eager to restore a more international calendar similar to its schedule before the COVID-19 epidemic.

The FIA has finally approved a revised schedule for 2023 that does not include the anticipated Middle Eastern round, which is believed to be in Saudi Arabia. 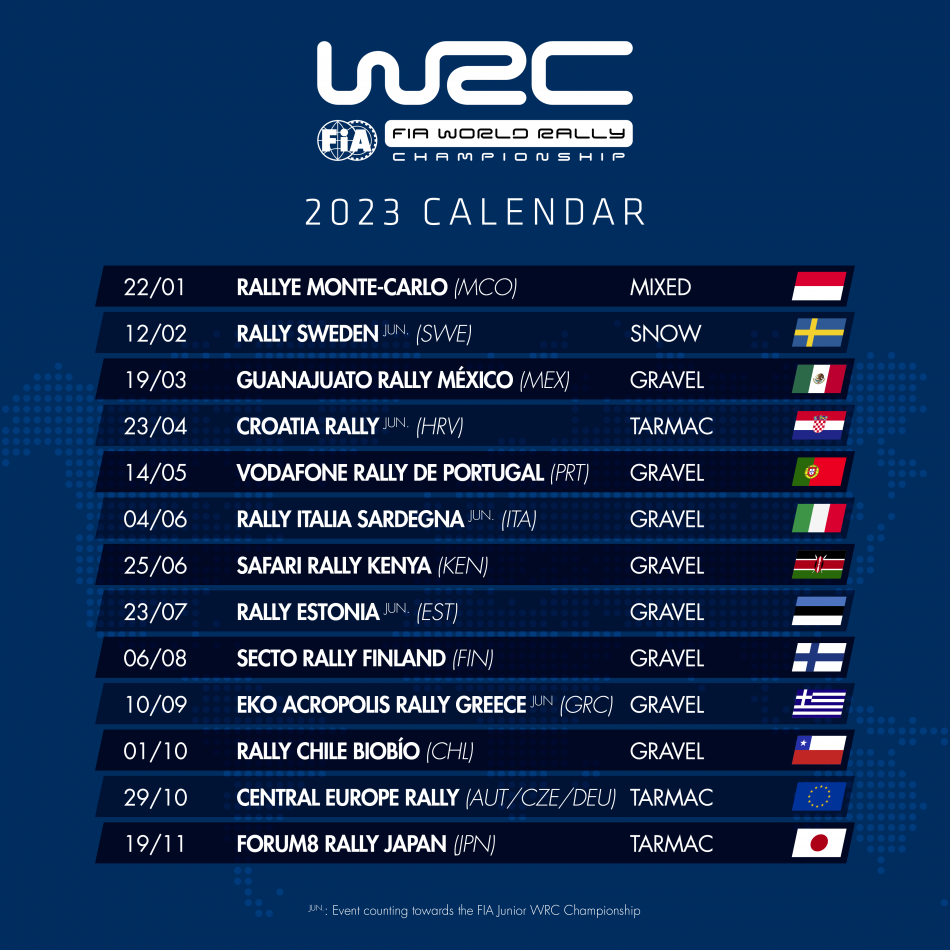 In addition to the customary snow event in Sweden, the season will include four tarmac rallies and eight gravel rallies. In contrast to this year, when there was a seven-week break between rallies in Sweden and Croatia, events are much more equally spaced out.

With the gravel of Mexico being reinstalled after being removed from the calendar following 2020’s abbreviated edition due to the coronavirus outbreak, the WRC returns to Central and South America on the new calendar. Following the customary winter curtain raisers in Sweden and Monte Carlo, the third round of the championship will be held in Mexico in March.

Gravel rallies have continued to be scheduled after the Croatian tarmac round in Portugal, Sardinia, Kenya, Estonia, Finland, and Greece. Following its debut in 2019, Chile will also return to the schedule for just its second WRC race. Due to political and social upheaval in the nation, the gravel rally that was scheduled to take place in 2020 has been postponed.

Following the Acropolis Rally Greece, the South American leg of the championship will take place in September or October.

South-east Germany will serve as the home base for the new WRC Central European tarmac event, which will also go to Austria and the Czech Republic. It will essentially take the place of the well-liked Rally Spain, which is no longer on the schedule after being a fixture since 1991.

Japan will host the championship’s final race on asphalt once more in November after the nation returned to the calendar for the first time in 12 years this year. The competition received criticism after a significant safety breach, although teams and the local populace seemed to enjoy it.

It had been anticipated that the championship would have a round in Saudi Arabia when it returned to the Middle East, but it appears that the date of the tournament has been postponed until 2024. Rally Jordan hosted the last desert-based rally for the WRC in 2011.