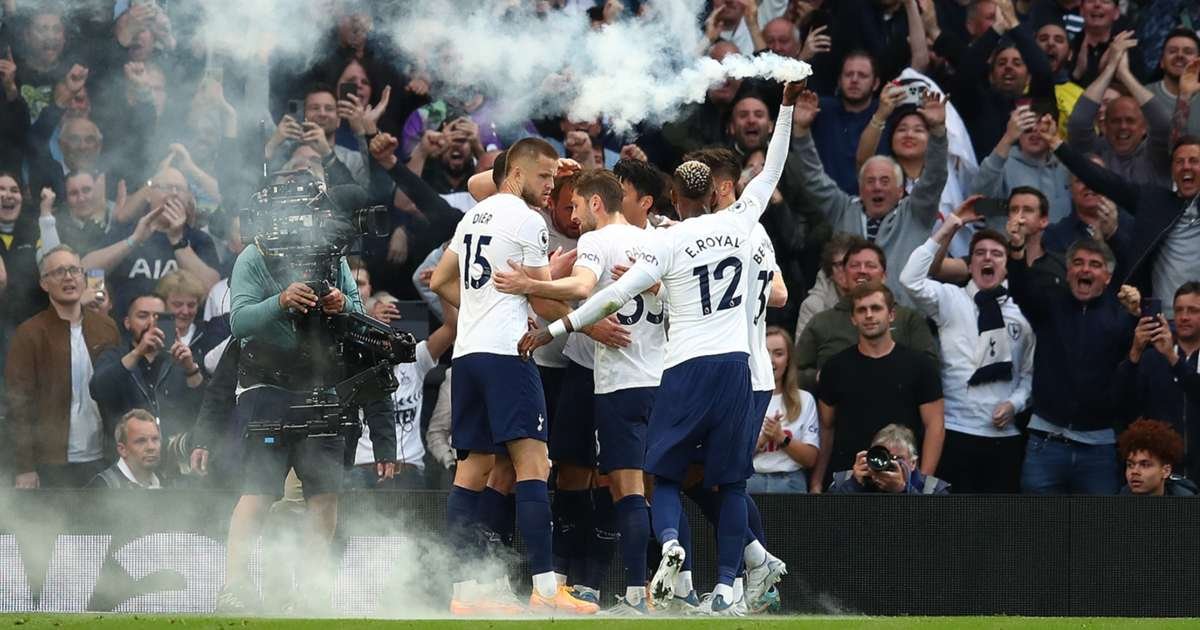 Tottenham thrashed Arsenal with a 3-0 victory to secure a huge victory in the race for Champions League qualification.

A win for the Gunners would have been enough for them to clinch a top-four finish in the Premier League for the first time since 2016, but they are now just one point clear of fifth-placed Spurs with two games remaining.

Harry Kane scored the opener from the penalty spot after Cedric Soares’ foul on Son Heung-min and it was a coming together with the South Korean that resulted in Rob Holding being shown a second yellow card in the 33rd minute – making Arenal play an hour with 10 men.

Kane doubled his tally before the half-time break and Son put the result beyond doubt early in the second period, putting Antonio Conte’s men firmly in contention for a Champions League spot.

Harry Kane leads Tottenham Hotspur players in celebrating after scoring his second against Arsenal in the Premier League clash at the Tottenham Hotspur Stadium on Thursday, May 13 2022. | PHOTO: Getty Images |

Tottenham were awarded a penalty in the 22nd minute when Cedric shoved Son over in the box and Kane showed great composure to send his spot-kick into the bottom-right corner.

Holding was given his marching orders after catching Son in the head with his arm and Spurs doubled their advantage just four minutes later.

Son’s corner was helped on towards the back post by Rodrigo Bentancur, with Kane stooping to nod into the back of the net from close range.

Things got worse for Arsenal just two minutes after the restart, with Son dinking the ball home through a crowd of bodies after Gabriel Magalhaes’ tackle on Kane. 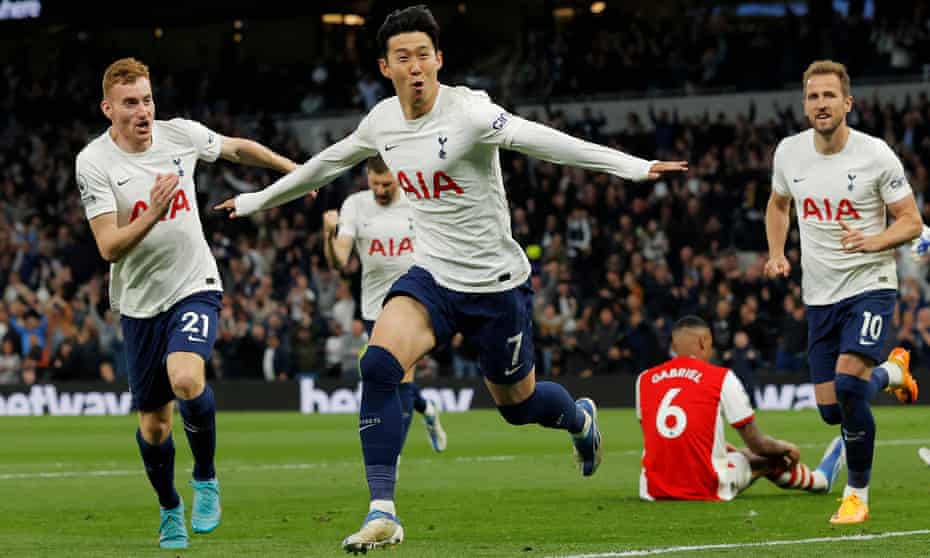 Tottenham Hotspur players celebrating after Son Heung-Min scored the third against Arsenal in the Premier League clash at the Tottenham Hotspur Stadium on Thursday, May 12 2022. | PHOTO: Getty Images |

Aaron Ramsdale made two saves in quick succession to deny Emerson Royal and Kane, while Son was unable to turn Ryan Sessegnon’s pass on target despite being one-on-one with the keeper.

Gabriel hobbled off late on with a hamstring injury for the Gunners, who were left to mull over a defeat that put a dent in their hopes of a return to the Champions League.

Arsenal was completely undone after Holding’s dismissal, which was their 13th red card in the Premier League since Mikel Arteta’s first game in charge in December 2019 – that is five more than any other team in the same timeframe.

They were unable to keep things tight and consequently fell to a third straight away loss to Spurs in the league for the first time since August 1961.

The Gunners must regroup ahead of a trip to Newcastle United and a clash with Everton, with Spurs still to face Burnley and Norwich City.

With his first-half double, Kane took his haul of top-flight goals against Arsenal to 13. The only team he has scored more against in the competition are Leicester City (17). Kane has now been involved in 52 goals in 69 London derby appearances in the Premier League, two behind Thierry Henry’s record.

While they still had their full complement, Arsenal had a chance of getting back into the game at 1-0 down. However, Holding managed to commit four fouls – the most he has made in a single Premier League appearance – in the opening 33 minutes, and his red card ruined their hopes.

Spurs take on Burnley on Sunday, meaning Arsenal could be outside the top four when they play away at Newcastle United on Monday night.

Tottenham v Arsenal: a look at iconic North London derbies ahead of PL clash
Tottenham rose to the occasion to thrash Arsenal in and off the pitch