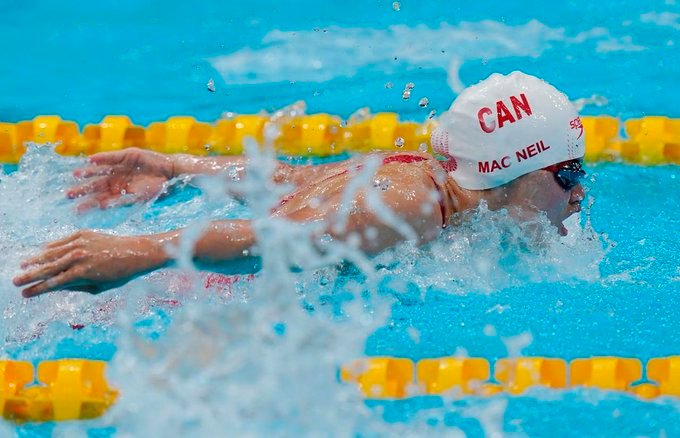 Canada's Maggie Mac Neil during a swimming race of the women's 4 x 100m medley relay final during the Tokyo Summer Olympic Games, in Tokyo, on Aug. 1, 2021, where she won a bronze medal.

.She won a bronze in the 4×100-meter medley real Tokyo Olympics.
.Mac Neil will compete this summer in both the world championships in Budapest, Hungary.

“It’s an honor, it means a lot to me,” said Mac Neil said in a statement. “Swimming in Canada, especially for females, had increased since Rio and I think we’re still on an upward trajectory.
“There are so many good swimmers on the team and just being able to swim with them, and learn from them, means a lot to me.” 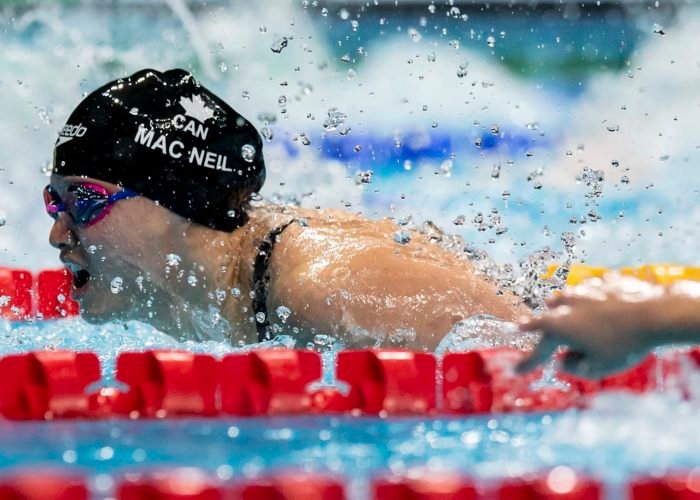 Neil who is from London, Ont. had a breakout in 2021 that saw her win a medal of every color at the Tokyo Olympics.

She won a bronze in the 4×100-meter medley relay, silver in the 4×100 freestyle relay, and gold in her signature event, the 100 butterflies.

“To come home with a full set (of medals) was amazing,” she added.
At the short-course world championships in Abu Dhabi in December, Mac Neil won four gold medals and set a new world record in the 50-meter backstroke event.

Neil is currently a student at the University of Michigan, Mac Neil says the transition from Olympic glory back to regular school life has not been easy.

“I’m kind of struggling to see what I want to do next but I’m enjoying this right now and enjoying the ride,” she said.
Given all the success she’s had, Mac Neil is aware she is now swimming with a target on her back

“After winning at the Olympics and setting a world record, I feel I am very familiar to (my competitors). I try not to think about that too much and put too much pressure on myself. I always do the best I can do. I just want to know I put my full effort in.”

Mac Neil will compete this summer in both the world championships in Budapest, Hungary, and the Commonwealth Games in Birmingham, England, with her sights firmly set on the 2024 Paris Olympics.
“Paris is a long-term goal so I’m always working toward that,” she said

Mac Neil last year was part of the Canadian delegation to the 2021 FINA World Swimming Championships (25 m) in Abu Dhabi, the top international event competed in a short course pool.
She won the gold medal in the 50 m backstrokes, setting a new world record in the process, afterward admitting that she would never have expected to set her first world record in that stroke.
She won gold as well in the 100 m butterfly with a national record time of 55.04, making her the first woman to hold Olympic, World Aquatic, World Swimming, and NCAA titles in the same event simultaneously, and the second person to do so after Aaron Peirsol. She won three other medals, two gold, and silver, in relay events at the championships.