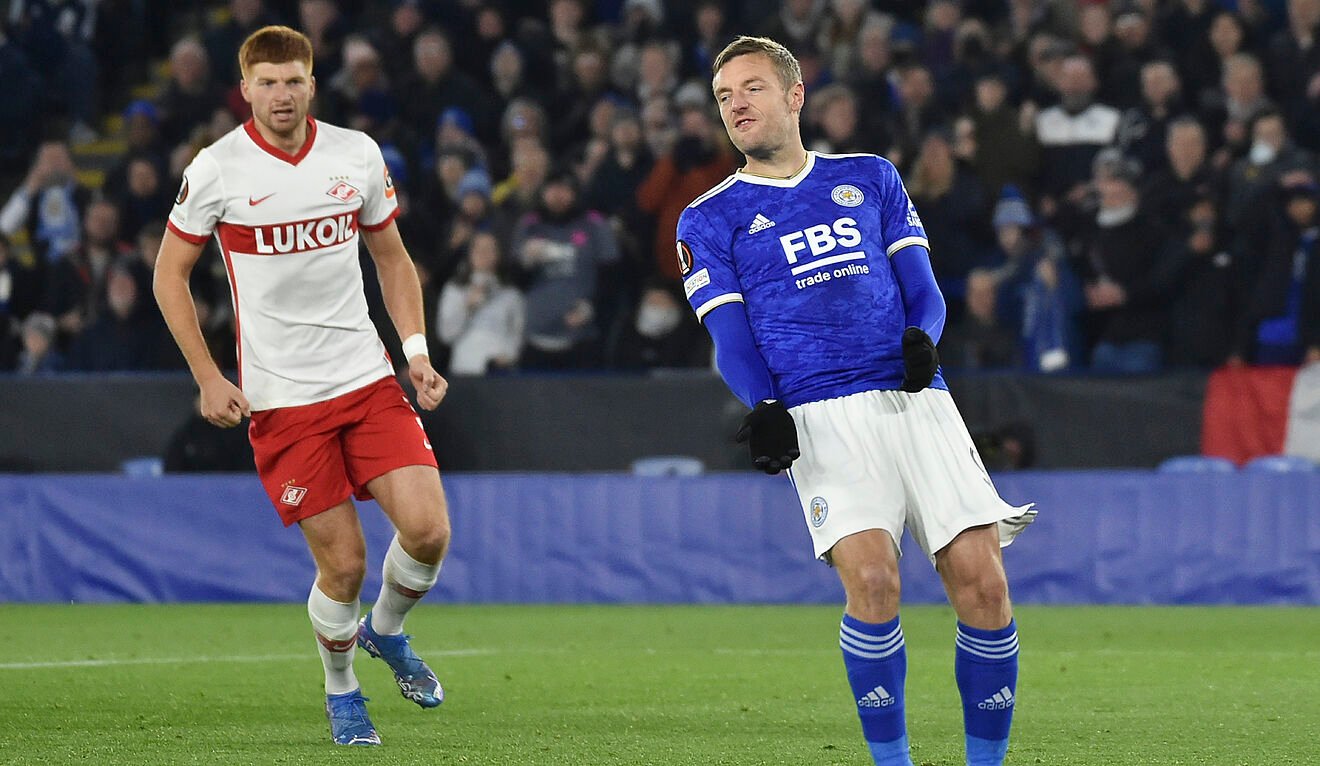 Vardy was gutted after missing the penalty. | PHOTO: Getty Images |

Former Chelsea man Victor Moses on his return to England put Spartak ahead early in the second half when he escaped the attentions of Leicester’s defense and planted a firm header low into the corner of the net. 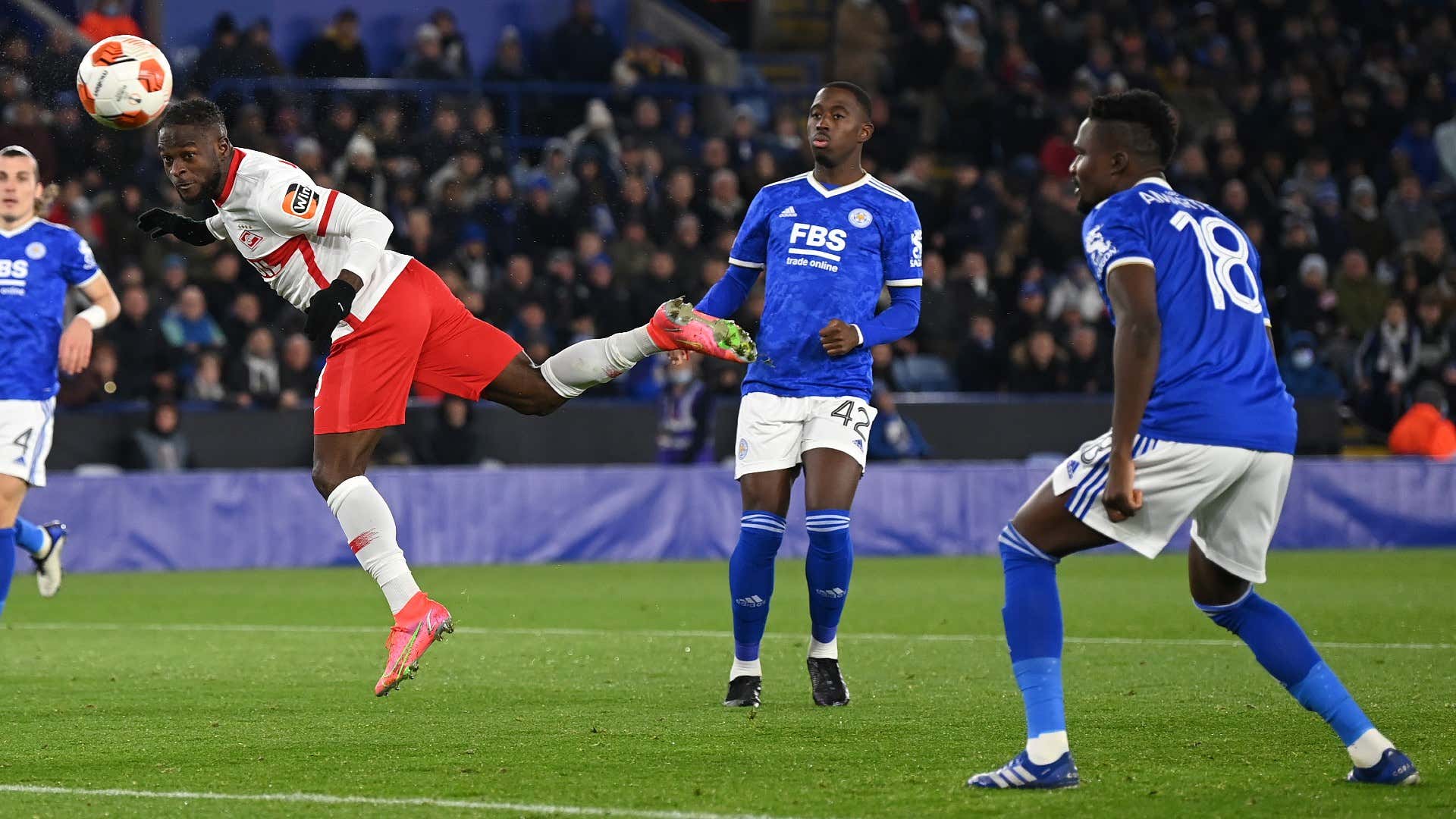 Victor Moses headed in to give Spartak Moscow the lead against Leicester City before Amartey equalized and Jamie Vardy missed from the post in a EUROPA League meeting. | PHOTO: Getty Images |

The Foxes equalized shortly afterwards when Daniel Amartey headed in from a corner before Moses turned from a hero to problems when he gave away a penalty when he hauled down Ademola Lookman.

Substitute forward Jamie Vardy stepped up to take the spot-kick, but Spartak goalkeeper Alexander Selikhov guessed correctly to ultimately secure the visitors a point at the King Power.

Spartak was content to sit deep, giving Boubakary Soumare the time to shoot from a distance as he struck the underside of the crossbar with a spectacular effort.

Despite enjoying 73.7 per cent of possession in the first half, that was as close as the Foxes went before the interval and Spartak took the lead six minutes into the second half – Mikhail Ignatov’s right-wing cross allowing the unmarked Moses to guide a header beyond Kasper Schmeichel.

Leicester leveled just before the hour mark when Perez flicked on Ryan Bertrand’s in-swinging corner and Amartey outmuscled Roman Zobnin to head in.

Shortly after replacing Patson Daka, Vardy was presented with a chance from the penalty spot with 14 minutes left of normal time after Moses felled Lookman, but Selikhov dived low to his left to save superbly. 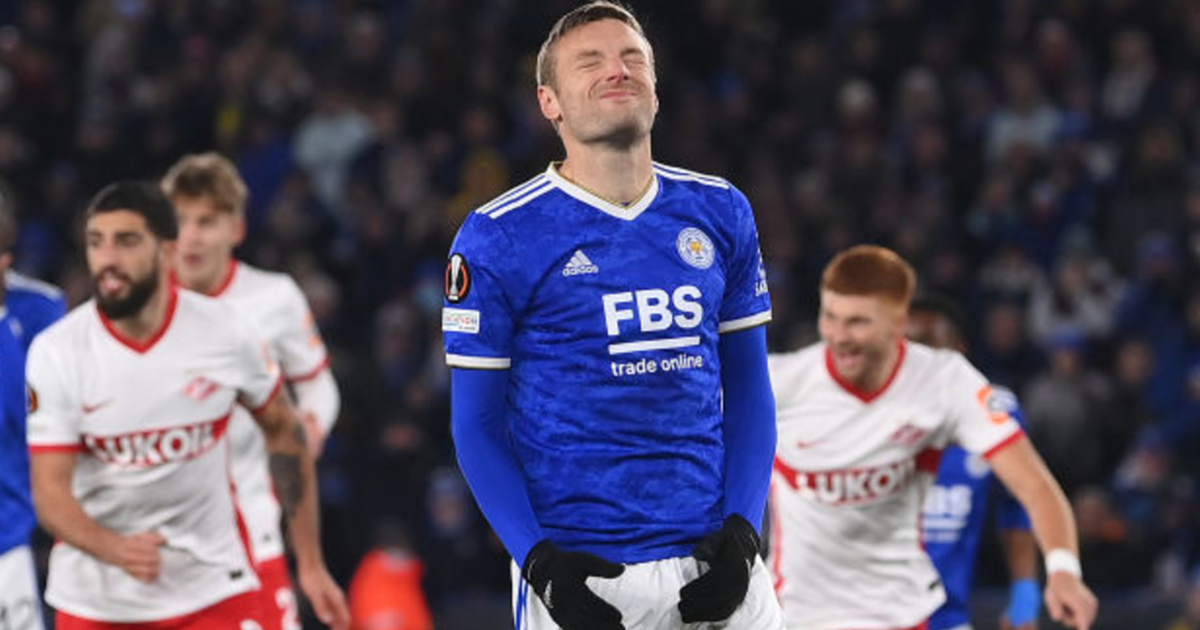 Leicester City forward Jamie Vardy missed a penalty to deny his side a win over Spartak Moscow in the Europa League on Thursday, 4 November. | PHOTO: Getty Images |

Leicester had a final chance through Kiernan Dewsbury-Hall’s saved header, with Iheanacho unable to capitalize on the rebound.

Spartak has conceded 14 goals in their last four fixtures – including a thrilling 4-3 defeat to Leicester in Moscow – but the Foxes were poor in front of goal with only three of their 13 attempts actually on target.

However, with two fixtures left to play, just three points separate Group C leaders Napoli, who beat second-placed Legia Warsaw 4-1, and Spartak at the bottom ensuring all is still to play for in Group C.

Leicester is third with games at home to Legia and away to Napoli still to come, meaning their fate is still in their own hands.

Spartak have been leaking goals for fun recently, but this was very much Selikhov’s night. He commanded his box with authority and made two key saves, including Vardy’s spot-kick.

Daka netted four times in the reverse fixture in Moscow, becoming the first Leicester City player to do so since 1958. At the King Power Stadium, he failed to register a shot on target with just three touches inside the box, although Vardy’s penalty miss grabbed the focus.

Leicester head to Leeds United in a Premier League action at Elland Road on Sunday while Spartak host city rivals Lokomotiv Moscow in the Russian Premier League the same day.