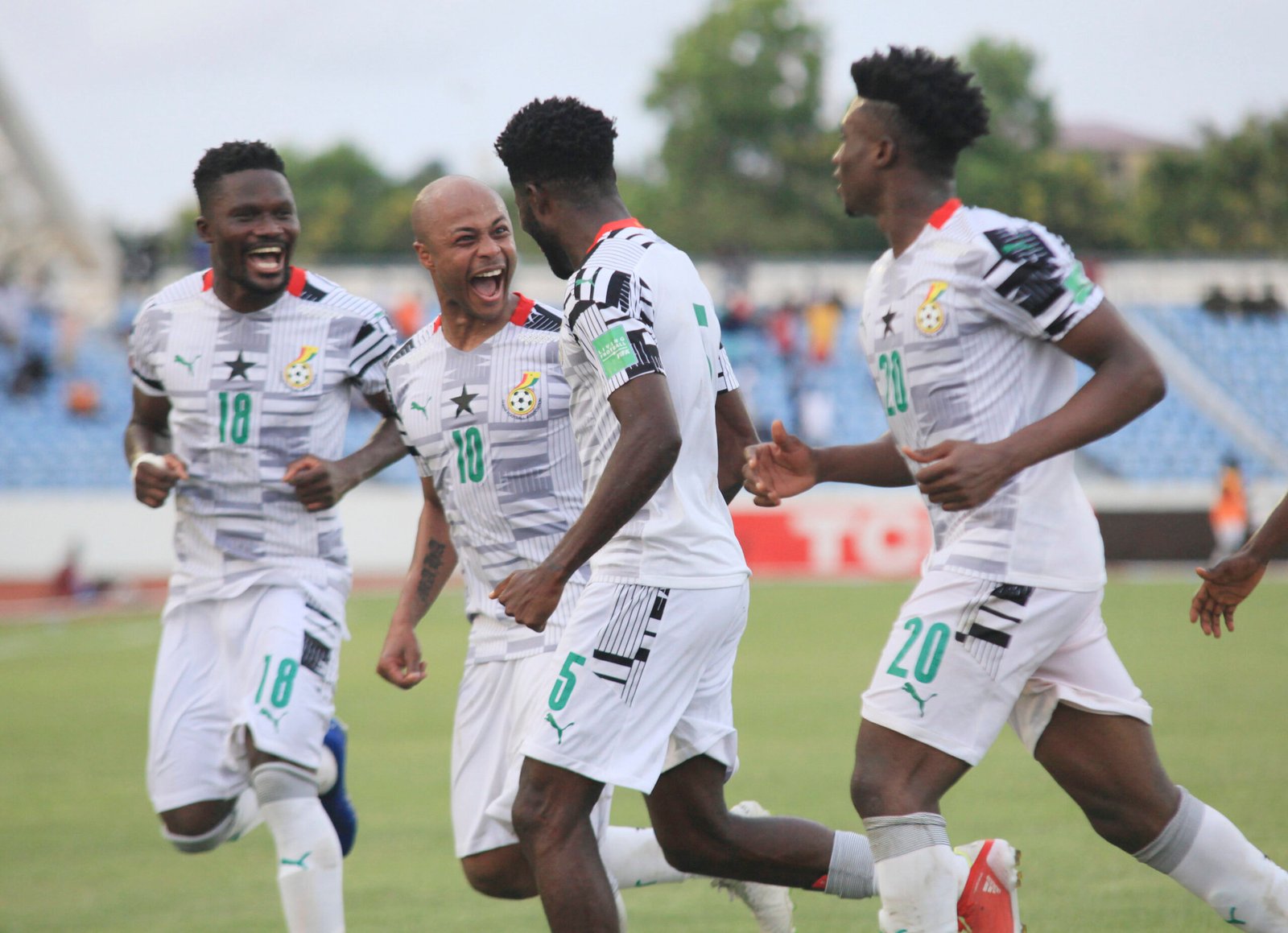 Ghana and DR Congo have progressed to the play-off round of the Qatar 2022 FIFA World Cup after both won their top of the table clashes on Sunday night.

The Black Stars controversially beat South Africa 1-0 to progress by the skin of their teeth while Les Leopards won 2-0 against Benin to also go through.

In Cape Coast, Andre Ayew converted a controversial first-half penalty as the Ghanaians finished top of their group with 13 points, the same as second-placed South Africa. The two sides also shared the same goal difference, but Ghana progressed on the account of having scored more goals.

Heading into this last round of group fixtures, Ghana were under pressure to win and were off to a strong start from the word go.

Jordan Ayew had a good chance in the 14th minute when he stormed his way into the box from the right but his shot was deflected for a corner.

Two minutes later substitute Daniel-Kofi Kyereh who had come on for the injured Mohamed Kudus had a good chance when he ran into the box from the left, but his powerful shot was over the bar.

Ultimately, Ghana got into the lead in the 31st minute when the older Ayew converted from the penalty spot after Daniel Amartey looked to have come down inside the area under a slight nudge from Bafana Bafana defender Rushine de Reuck.

The South Africans strongly protested the decision, but the ref held to his ground with Ayew converting the goal to mark his 100th appearance for Ghana with a goal.

In the second half, it was South Africa who had the chances. Percy Tau had two successive opportunities, first his freekick from range went straight into the keeper’s arms while he also had a shot from the edge of the area saved by the shot-stopper.

Despite concerted efforts, Ghana defended with their lives to keep the score and earn a ticket to the next round.

Meanwhile earlier on, DR Congo finished top of Group J with 11 points, one ahead of Benin who they beat 2-0 in Kinshasa. 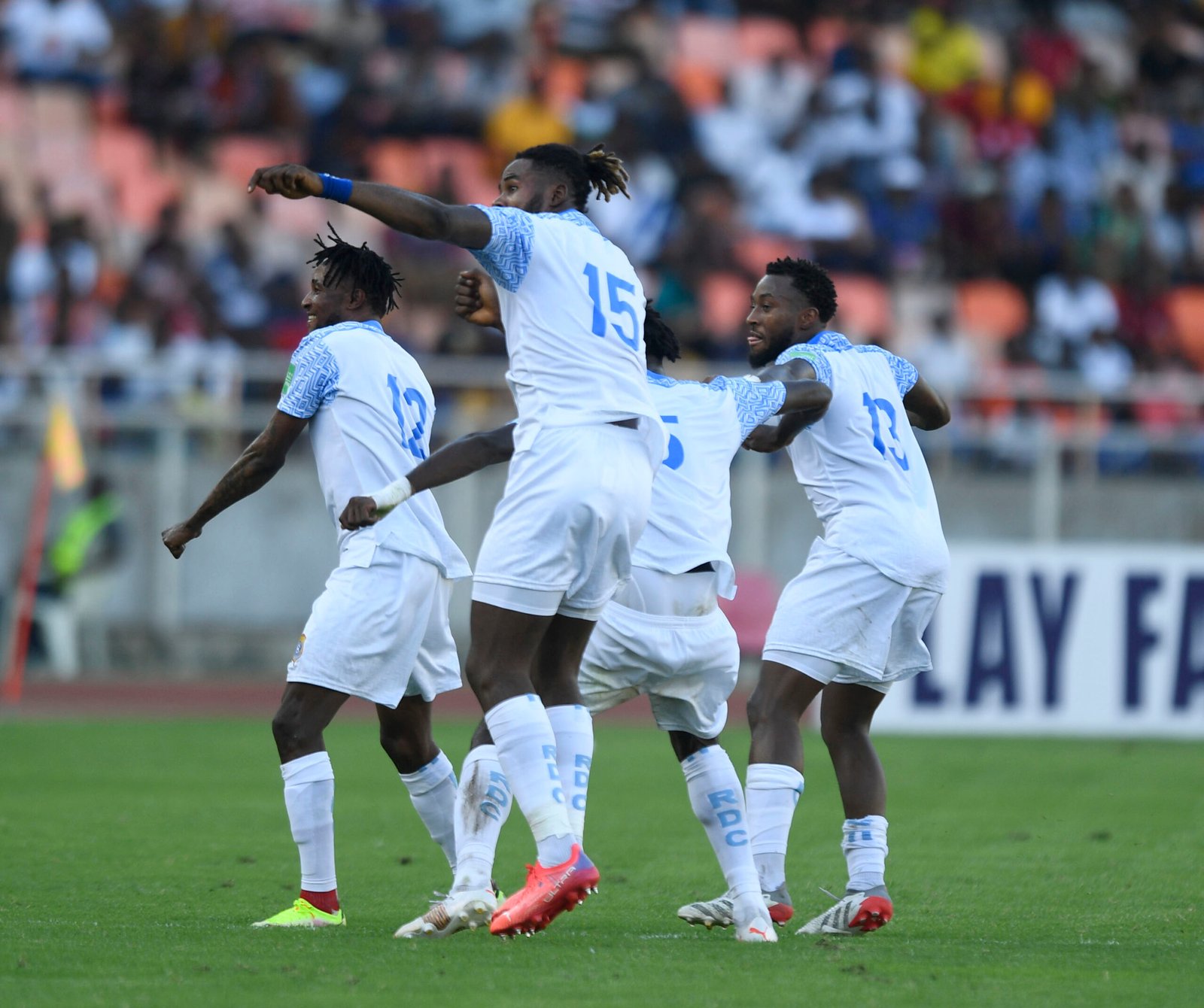 DR Congo celebrate a goal in a past match

Heading to this fixture, Benin just needed a point in the Congolese capital to get themselves into the play-off round but found themselves pegged back after just 10 minutes. Dieumerci Mbokani converted from the penalty spot after he was pulled back inside the area.

The Congolese held on to the lead, failing to net in a second despite having some chances.

In the second half, Benin came back with a strategy to get themselves into the game and were on attack mode from the restart. They came close four minutes after the restart when Jodel Dossou weaved his way into the box, but his eventual shot hit the side netting.

The Beninese side kept pushing, knowing just a draw was enough to push them a step closer to a dream place in Qatar.

But, their hopes were skinned off with a quarter of an hour left when Ben Malango headed home from the edge of the six-yard box after rising to meet a Dieumerci Amale cross from the right.

DR Congo managed the game neatly to ensure they guarded their victory and earn a ticket to the play-offs. Tanzania finished third in this group after playing to a 1-1 draw with Madagascar.

In other results, Senegal beat Congo 2-0 in Thies courtesy of a pair of goals from Ismaila Sarr.

The Watford FC striker broke the deadlock with a ferocious shot in the 14th minute before tapping home for the second 10 minutes later.

Senegal finish the group round with 16 points, their only blemish being last week’s draw with Togo.