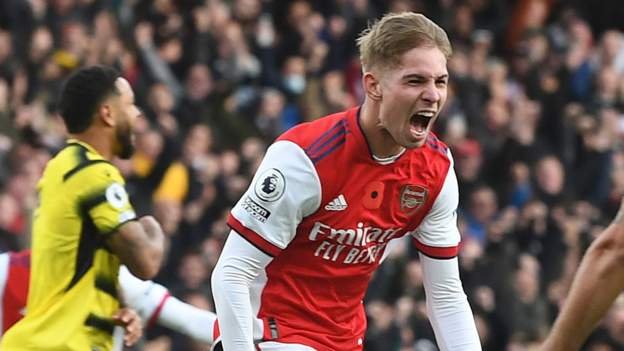 Arsenal’s breakthrough came after a difficult first half that saw a Bukayo Saka goal ruled out for offside before Watford goalkeeper Ben Foster saved Pierre-Emerick Aubameyang’s penalty to deny Arsenal the lead.

Foster was in psyched form but could not keep out Smith Rowe’s drilled shot 11 minutes after the break, with that proving to be the only goal of Sunday’s clash at Emirates Stadium, where Juraj Kucka was sent off late on for Watford.

Arsenal players in celebration after Emile Smith Rowe scored the only goal against Watford at the Emirates Stadium on Sunday, 7 November 2021. | PHOTO: Getty Images |

Arsenal is now eight league matches without defeat – winning six matches in the process – making this their best such run in the competition since another eight-game spell ended in March 2020.

Arsenal’s Bukayo Saka thought he had opened the scoring early on when Aubameyang’s heavy touch ran to the winger in front of goal, but he was stood beyond Foster and was ruled out for offside after a VAR review.

Arsenal continued with their dominance and was awarded a penalty when Danny Rose fouled Alexandre Lacazette in the 18-yard box. However, Aubameyang’s attempt from the spot lacked precision and Foster saved with a combination of his arm and leg down to his right.

Although Foster was then equal to Gabriel’s header, the Gunners had scored at least once in all 14 previous Premier League meetings with Watford and kept that run going here.

Smith Rowe picked up the ball following a positive run from Ben White and swept the first-time finish away from Foster to make it five goals for the season in all competitions.

Substitute Martin Odegaard was then denied when his goalbound effort was tapped in by an offside Aubameyang at the back post.

That set up a slightly nervy finish as Joshua King fired into the side-netting following a lapse in judgment from Aaron Ramsdale, but Kucka’s second yellow card for a wild swipe at Nuno Tavares effectively ended Watford’s hopes of snatching a point.

With the win, this was Arsenal’s landmark victory – their 54th in Arteta’s century of matches – even if they were made to work a little harder than expected for the three points in the end.

Notably, this was the Gunners’ first home Premier League win in the month of November since 2017, snapping a run of four draws and two defeats since then. 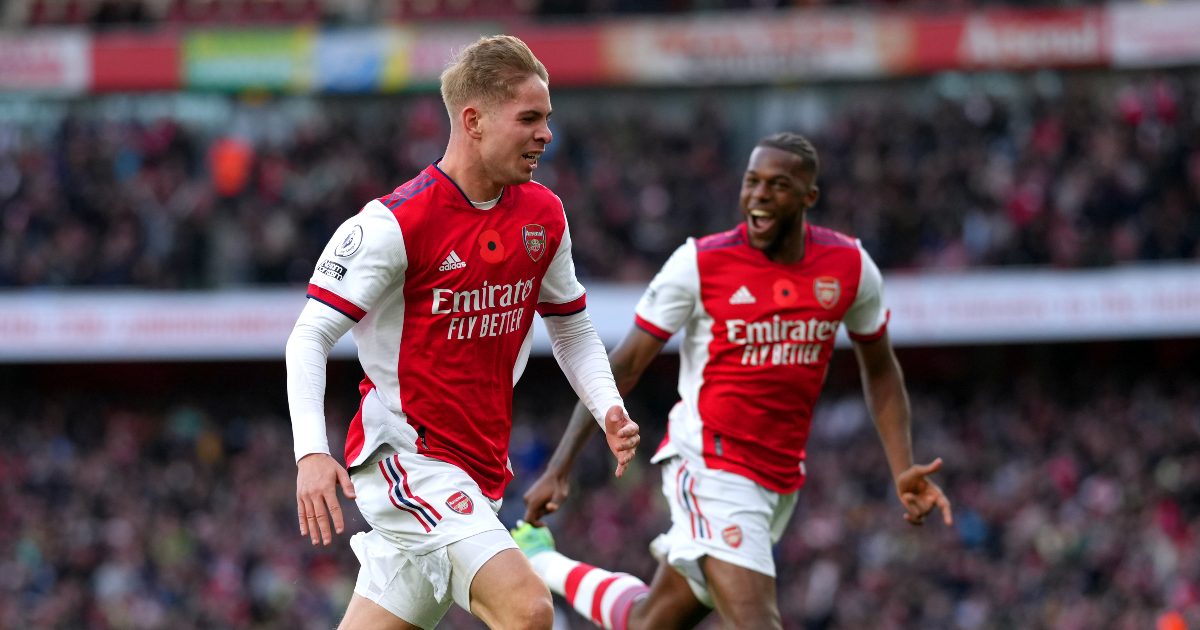 Emile Smith Rowe scored the only goal in the match for Arsenal against Watford on Sunday, 7 November in a Premier League clash at the Emirates Stadium. He is now the fourth Arsenal player to score in three consecutive Premier League matches aged 21 or younger. | PHOTO: Sky Sports EPL |

Arteta’s men go into the final international break of the year sitting in fifth place – an incredible turnaround after losing their opening three games.

Arsenal’s goal came from one of 14 shots, six on target, with Smith Rowe proving to be their match-winner.

The England Under-21 international is the fourth player to score in three consecutive Premier League appearances for Arsenal when aged 21 or younger, after Nicolas Anelka, Jose Antonio Reyes, and Cesc Fabregas.

Aubameyang was bailed out by Smith Rowe after missing his second successive penalty in the Premier League. The striker has failed to score from four of his 13 penalties in the competition – only club legend Ian Wright (six) has missed more for the club.

As poor as the effort was, Foster did well enough to keep it out. At 38 years and 218 days, he is the oldest keeper to save a Premier League penalty since Shay Given for Stoke City against Everton in August 2016 (40y, 129d).

After a disappointing start to the season, Mikel Arteta’s men have bounced back and are now sitting fifth on the Premier League table, two points behind fourth-placed Liverpool and six behind leaders Chelsea.

Arsenal travels to Anfield to take on Liverpool on November 20 after the two-week international break, while Watford host Manchester United at Vicarage Road on the same day.