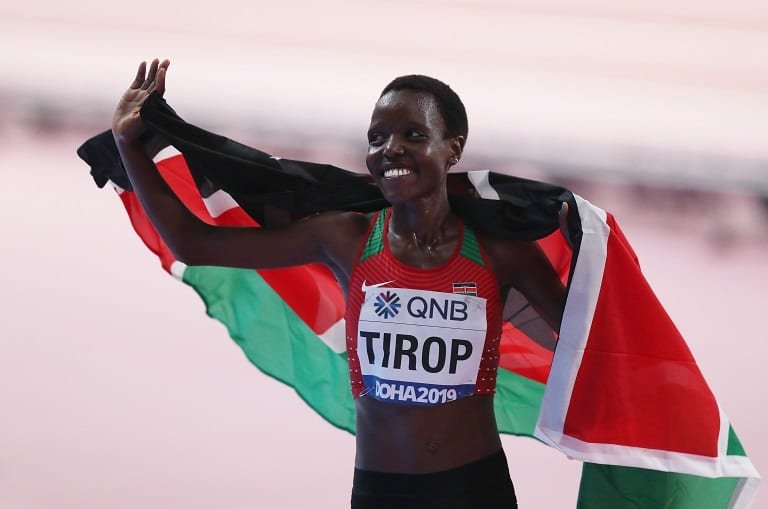 Former World Cross Country Champion Agnes Tirop has been found dead in her house, allegedly murdered by her jilted lover only 10 days before her 26th birthday.

Tirop who represented Kenya at the Tokyo Olympics allegedly had issues with the lover and the latest twist of events ended with her being murdered.

“It is true that she has been murdered. We are sending our officials down to Iten to get more information on what happened but what we are primarily getting is that she was allegedly murdered by her lover,” Athletics Kenya Executive Committee Member Barnaba Korir said.

According to sources, Tirop has been having issues with the lover for a long time.

“She has been found killed like a chicken. It is so sad what has transpired,” a source who declined to be named told Sportsleo.

The source further added; “They have been having issues with the lover for a long time. They had been together then broke up and got back together recently when the issues escalated. It is so sad it had to end this way because Tirop had decided she was leaving for good.”

Tirop’s last assignment for Team Kenya was at the Tokyo Olympic Games where she competed in the 5,000m, finishing fourth in a season’s best time of 14mins, 39.62secs.

She won the World Cross Country title in 2015, two years after winning silver in the junior event.

Meawhile, Athletics Kenya in a statement have expressed shock and grief at Tirop’s sudden passing, coming just a week after coming second at the Valencia Half Marathon.

“Athletics Kenya are this afternoon distraught to learn about the untimely death of World 10,000m bronze medalist Agnes Tirop. Tirop was found dead at their home in Iten after she was allegedly stabbed by her husband. We are still working to unearth more details surrounding her demise,” AK said in a statement.

“Kenya has lost a jewel who was one of the fastest-rising athletics giants on the international stage, thanks to her eye-catching performances on the track. We pray that God may grant strength to family and friends at this difficult time.”

At the same time, President Uhuru Kenyatta has directed law enforcers to ensure that the perpetrator of the heinous crime are brought to book.

“I urge our law enforcement agencies led by the National Police Service to track down and apprehend the criminals responsible for the killing of Agnes so that they can face the full force of the law,” the Head of State directed.

“It is unsettling, utterly unfortunate and very sad that we’ve lost a young and promising athlete who, at a young age of 25 years, she had brought our country so much glory through her exploits on the global athletics stage including in this year’s 2020 Tokyo Olympics where she was part of the Kenyan team in Japan.”

“It is even more painful that Agnes (Tirop), a Kenyan hero by all measures, painfully lost her young life through a criminal act perpetuated by selfish and cowardly people,” the President said.

Athletes, fans, coaches and managers alike have expressed shock at the sudden death of the athlete, who was set to start preparations for next year’s events that includes the World Championships and the Commonwealth Games.