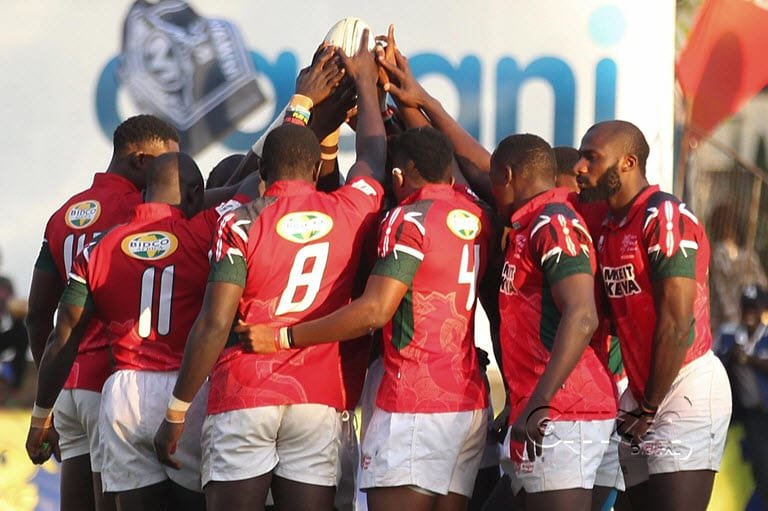 Shujaa will take on arch-nemesis USA in the Main Cup quarter finals of the Vancouver Sevens on Sunday night after finishing off second in Pool A with two victories and a loss.

The Kenyan boys won back to back matches on Saturday night, beating Spain 17-3 and thrashing Mexico 45-7 to confirm their place in the Cup quarters. Despite a loss to South Africa in their last match of the Pool, the team still had a place in the last eight.

Against South Africa, Innocent SImiyu’s men ran in two converted tried while the South Africans ran in five, four of which were converted to earn the huge victory.

The South Africans had started well with Muller du Plessis crossing over for the first with just 35 seconds on the clock before further punishment for Kenya followed as they conceded three more first-half tries.

Ryan Oosthuizen dotted down for a 14-0 lead before a brace from Ronald Brown, both of which were converted gave South Africa a 28-0 lead. Shujaa’s fightw as further complicated with Willy Ambaka being sent to the sin bin after a yellow card.

Shujaa came back better in the second half and Alvin ‘Buffa’Otieno drew one back with a simple dot down. Daniel Taabu showed a great turn of pace to enter the in-goal area before to Otieno who dotted down under the posts. The conversion was good as Kenya went to seven points.

However, the South Africans responded, stretching their lead to 33 after JC Pretorius dotted down. But the hard fighting Kenyans tried to find their way back into the game.

Alvin Marube scored Kenya’s second try with the conversion going in, but the comeback could not be completed as South Africa held on for the win.

Earlier, Shujaa had done well to win against Spain and Mexico.

Against the Spaniards, Kenya had a brilliant start to the tournament with three tries, one of which was converted. The on-form ‘Buffa’ dotted down Kenya’s first try before Willy Ambaka doubled the tally.

Spain temporarily spoilt for a fight with Andres Armau responding, but Harold Anduvate dotted down Kenya’s third try to seal the victory.

The second match against Mexico was an easier affair and coach Simiyu had the prestige to rotate his squad to ensure everyone is given some much needed rest. The team was till effective scoring seven tries, five of which were converted.