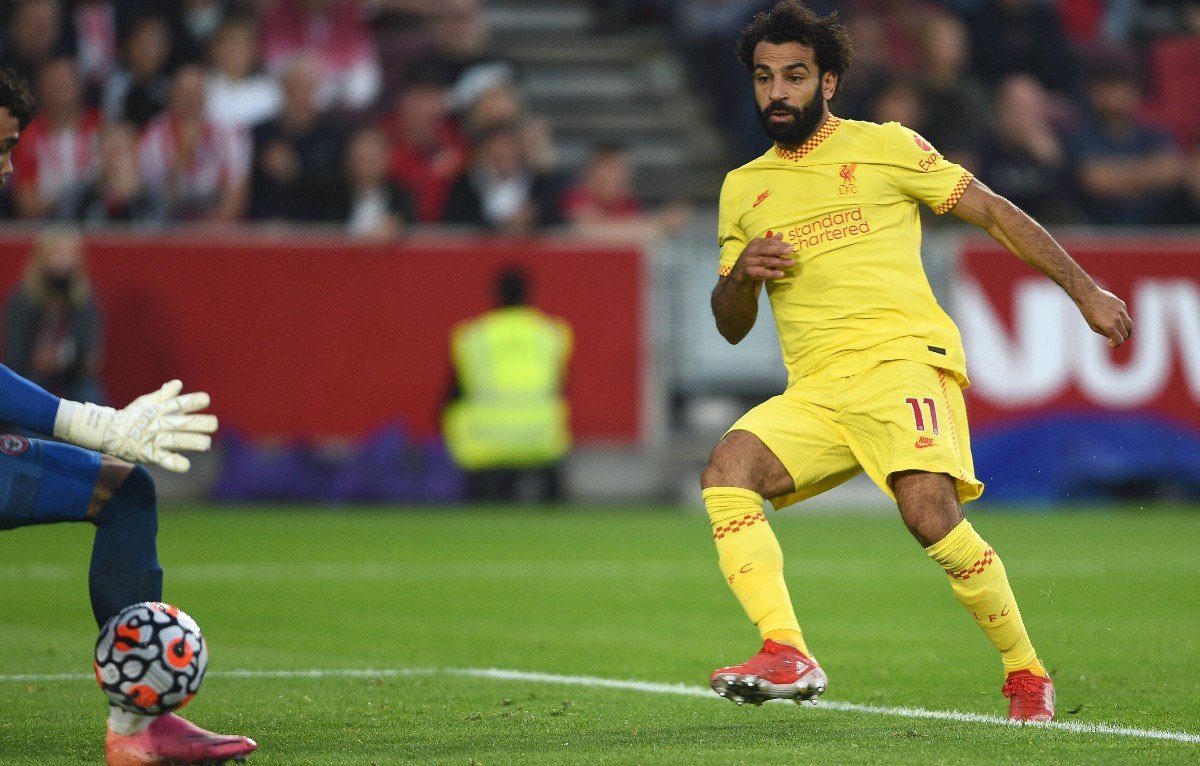 The prolific Egypt international bagged 100 Premier League goals in the win at Leeds United this month, becoming the 30th player to reach the landmark. Notably, two of the goals were not in his Liverpool time but his short spell at Chelsea in 2015 before moving to Roma.

Whilst his spell at Chelsea was not that fruitful, Salah now has a three-figure haul in the competition for the Reds after firing them into a 2-1 lead against the Bees, who subsequently equalized through Vitaly Janelt.

A VAR decision went in Salah’s favor after he was initially given offside when converting Fabinho’s excellent pass in the 54th minute.

The former Roma and Chelsea man reached the 100 mark in his 151st Premier League appearance for Liverpool to set the club record, getting there in one match fewer than it took the great Roger Hunt to achieve the feat.

Salah’s strike against Thomas Frank’s side took his tally for the season to six goals in all competitions and was his fifth in the Premier League.

It was a case of more capital gains for Salah, who matched Steven Gerrard’s Reds record of 13 Premier League goals in London.

The left-footed winger is a two-time Golden Boot winner in England, and a tally of 32 goals during his maiden campaign of 2017/2018 at Anfield remains a record for a Premier League season spanning 38 matches. He was on target in 24 games of that 2017-18 campaign, another record, while also totally outscoring three teams becoming the first player to do so in Premier League history.

When scoring against Norwich City last month, Salah also became the first Premier League player to find the net on the opening day of five successive seasons, after finding the net in every opening weekend since signing for Liverpool in the summer of 2017/2018.

Drogba, who is regarded as an African legend has 104 Premier League goals to his name and Mohamed Salah is well on course to break that record and become the all-time African top scorer in the Premier League with only two goals remaining.

Since joining Liverpool, Salah has had a lethal partnership with fellow African, Senegal international Sadio Mane, and Brazilian native Roberto Firmino. Mane on his hand recorded 100 goals for Liverpool in all competitions since signing for the reds in the summer of 2016. The Senegalese joined from Southampton and hold the record of the fastest Premier League hat-trick, a record he set when he was in Southampton scoring three goals in two minutes and 56 seconds against Aston Villa in May 2015.

Whilst Salah is so prolific in Liverpool, he replicates the same in Egypt as he holds the record for Egypt national team all-time top scorer, finding the net 43 times in 69 appearances for the Pharaohs.

Salah surpassed the all-time record of Mohamed Aboutreika of 37 goals in 93 appearances.

Since joining Liverpool, the 29-year old has lifted the Premier League title in 2019/2020 and the UEFA Champions League in 2018/2019 as well as the UEFA Super Cup that same year, that year, he added up with the FIFA Club World Cup.