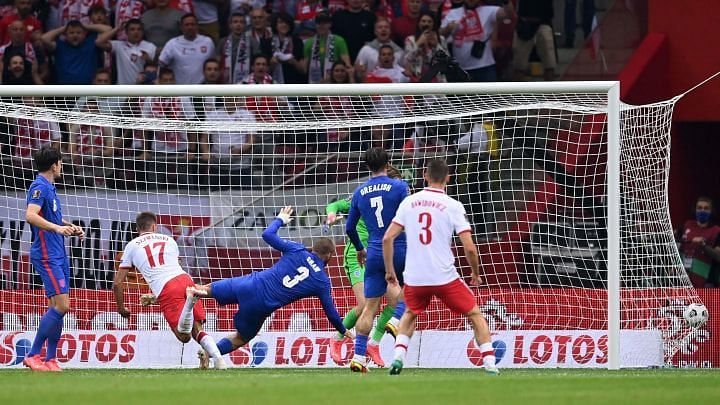 Gareth Southgate’s side still holds the top spot in Group I, yet they were moving eight points clear of Poland courtesy of Harry Kane’s second-half blast until Szymanski’s intervention in the dying minutes of the match.

The substitute headed past England shot-stopper Jordan Pickford in the 92nd minute to secure a precious point in Warsaw. 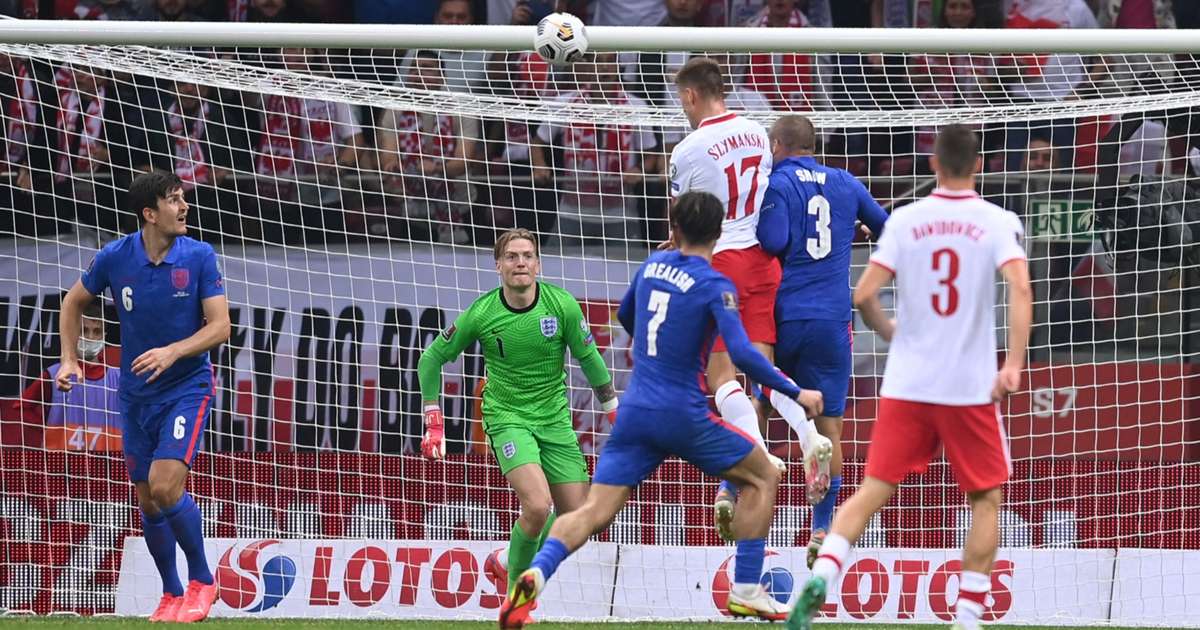 Poland’s Damian Szymanski (17) heading the ball in, in the 92nd minute. | PHOTO: Courtesy |

It was a result England might have taken beforehand, but the late leveler will send the Euro 2020 finalists to home frustrated after five straight victories in the road to Qatar.

The Three Lions themselves took some time to make a breakthrough, scarcely threatening in a feisty first half and then seeing Jack Grealish prod narrowly wide at the start of the second.

Manchester United captain Harry Maguire headed a deep Luke Shaw free-kick against the foot of the post, although the nearby Raheem Sterling was flagged offside before Kane stepped up 18 minutes from time.

There appeared little on as Kane collected the ball 25 yards from goal, yet his effort swerved from left to right, deceiving Poland goalkeeper Wojciech Szczesny and finding the bottom-right corner. 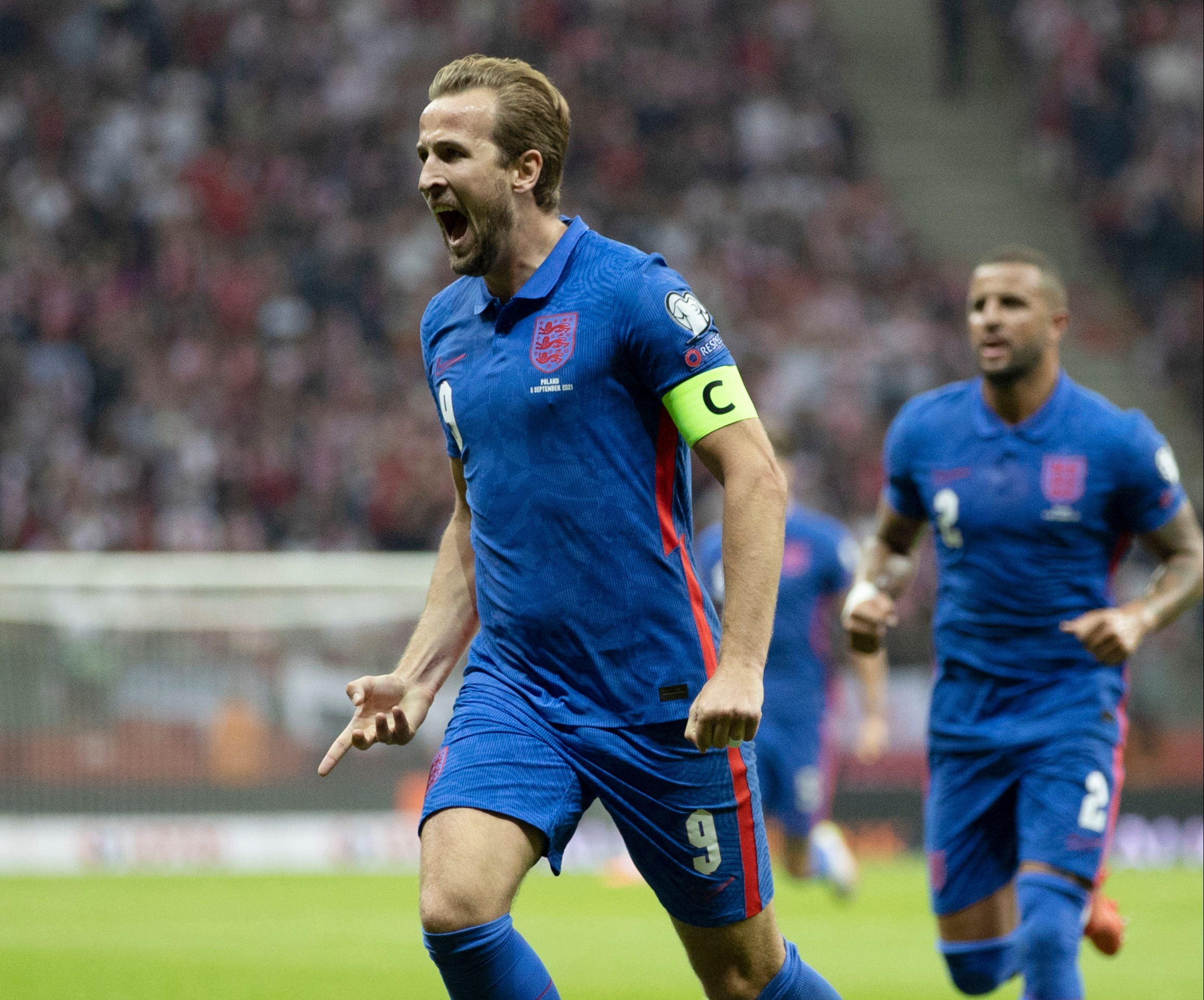 A Jordan Pickford aberration kept England on their toes, as the goalkeeper hared after a blocked clearance to save on his goal line, but they looked to have done enough entering added time.

However, a ball broke for Robert Lewandowski on the left-hand side of the area and he hung up a cross that Szymanski met ahead of Shaw to deny the visitors.

Now four points clear of second-placed Albania and five ahead of Poland in third, it would take a dramatic collapse for England to fall short of qualification to 2022 FIFA World Cup, but they would do well to learn from this disappointing draw.

Having controlled the game throughout, England let Poland back in right at the last. From the 86th minute onwards, the hosts had 70.9 percent of the possession and three attempts which included the leveler.

In a quiet display, Kane had only two shots, but his remarkable scoring run in qualifying matches went on. He has now netted in 15 consecutive such games across the World Cup and European Championship, tallying 19 goals in that time.

England has kept 11 clean sheets in 2021, matching their previous best calendar year in 1966. Pickford and Co were ever so close to making that record theirs alone but Szymanski could not let them.

The Three Lions are however still unbeaten in 16 games, though, and have not lost in 18 against Poland who are the most obvious threat in this pool, going back to a 1974 World Cup qualifier.

For only the second time in their last 18 major tournament qualifying matches, England has failed to register a victory, also failing in October 2019 against the Czech Republic.
England did not make a single substitute in this match, the first time that has happened since the Euro 96 semi-final against Germany.

Poland are unbeaten in their last 20 home matches in qualifying for the Euros/World Cup-winning 16 and drawing 4, starting with a 5-0 victory over San Marino back in March 2013.

The Three Lions conceded in the 90th minute of a World Cup qualifier for only the third time ever, also doing so in March 2001 against Albania and June 2017 against Scotland.

With the international break now over, England would have to complete the job next month when they visit Andorra and host Hungary while Poland welcomes San Marino before a huge game in Albania.