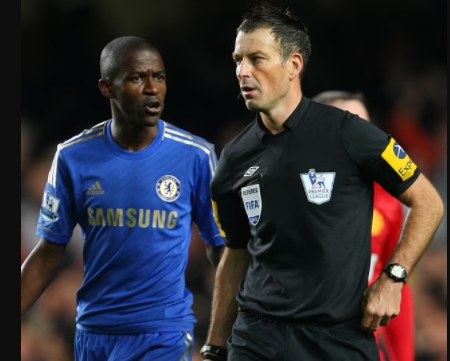 In his 13-year tenure as a Premier League player, former referee Mark Clattenburg weathered many storms in his career.

But, one that he was accused of racially abusing Jon Obi Mikel and Juan Mata at Stamford Bridge nearly ruined his flawless refereeing career.

It was in 2012 and he was the man refereeing a high stake Manchester United-Chelsea game at Stamford Bridge.

Chelsea suffered a 3-2 defeat to United. And just before the game ended, Clattenburg had sent off two Chelsea players.

In his mind, Clattenburg knew he would take some heat for sending off Branislac Ivanovic and Fernando Torres on top of official missing an offside which secured the Red Devils third and winning goal.

However, it was about to get bigger with allegations of a racial slur against the two players. 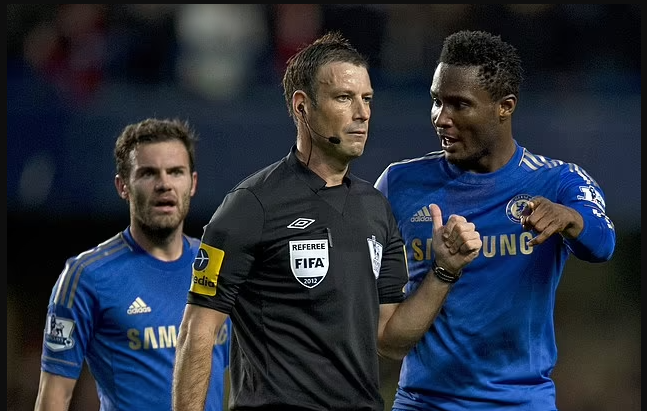 Clattenburg reflects in his autobiography Whistle Blower on this incident that grabbed world headlines for days.

The 13-year long FIFA referee narrates how it all went down in the dressing room.

“I heard a commotion outside the dressing-room door.”  “What the hell’s going on out there? Before I get to the door it swings open, and with some force. I jump back, instinctively. What the f***? John Obi Mikel bursts in.

“I can see the rage in his eyes. Chelsea manager Roberto Di Matteo and coach Eddie Newton are holding him back. Mikel is out of control, he’s trying to get at me. ‘I’m gonna break your legs!’ he shouts. F****** hell, he’s swinging for me.

“There are arms everywhere. I’m ducking to avoid them. A security guy is grappling with Mikel, pulling him away. That’s not easy, Mikel is strong. I’ve got my boots on, I’m slipping all over the place.

“I’m knocked backwards into some seats. I just try to defend myself. He’s still hellbent on hurting me. Get him out of here! Mikel is eventually dragged back into the corridor. What the f*** has just happened?”

De Matteo later returned to Clattenburg’s changing room looking visibly shaken. By now, nothing about racism had been mentioned.

He contemplated reporting the issue meaning Mikel would serve a long football ban as stipulated by FIFA standards.

Clattenburg left Stamford Bridge minutes later on a people-carrier headed to West London and onwards Heathrow. All he wanted was to get away from Stamford.

And then, the big shock came. His phone buzzed endlessly while going through security checks at Heathrow and he ignored it at first and then got it out. Alas! He was petrified to the core.

The subsequent night hours of Saturday night were long as the media churned out the version of the story. It was then he realized that he was all alone against Chelsea and their millions of hoodwinked fans.

Onwards, Clattenburg became a prisoner in his home. He could walk out nor sleep. Chelsea became consistent with sharing information with the press every so often that Clattenburg got no chance to defend himself.

All this time, the press is hovering around his home like hungry hawks taking sniper position ready to snap their cameras and take the first shot.

All that was going through the English referee’s minds was the mental prison these allegations cast him to. It was worse than being in prison. It meant the end of his career.

As a probe commenced, his two assistant referees and another official at Stamford Bridge confirmed to PGMOL they heard no racial language over the headsets.

Chelsea was now for days feeding the press with more information in a bid to control the narrative. Part of the allegation was that Clattenburg called Mata a ‘Spanish Twat’.

Then, two days after the game, then Chelsea midfielder Oriol Romeu said Mata never hear the alleged words he was pinning in Clattenburg.

Three days later, Chelsea filed a complaint with FA claiming that he told Mikel ‘Shut up, you monkey’. Yet, it was all false and the language itself disgusted him even more.

Surprisingly, Chelsea’s backup was that Mikel never heard this except for Brazilian player Ramires who heard ‘monkey’. Ramires barely spoke English, thus he deduced at this point that Chelsea was all out on a smear campaign against him.

Sleeping became a daunting task and slowly he slipped into a very dark place. And out of the blues, Sir Alex Ferguson called him pledging to support him.

“I have spoken to my players and they did not hear you say what Chelsea are alleging. We don’t believe you said it. I believe in fairness, so we will support you,” he said.

Fergurson stuck to his guns and publicly defended Clattenburg. In return, Chelsea threatened to sue him but he remained unmoved.

Three weeks later, FA dismissed the case. There was no evidence to suggest that Clattenburg racially insulted Mikel and Mata.

Mikel was handed a three-match ban following the incident that went down in the changing room. But, Clattenburg holds this was never enough.

Chelsea nor Mikel never apologized to him over the incident despite knowing well that it was fabricated. But, Clattenburg couldn’t expect less from the club which he says projected lots of dislike for him from the beginning.

Nine years later, he is not just about to forgive Mikel over the incident. How do you forgive someone who can’t apologize? Clattenburg wonders.