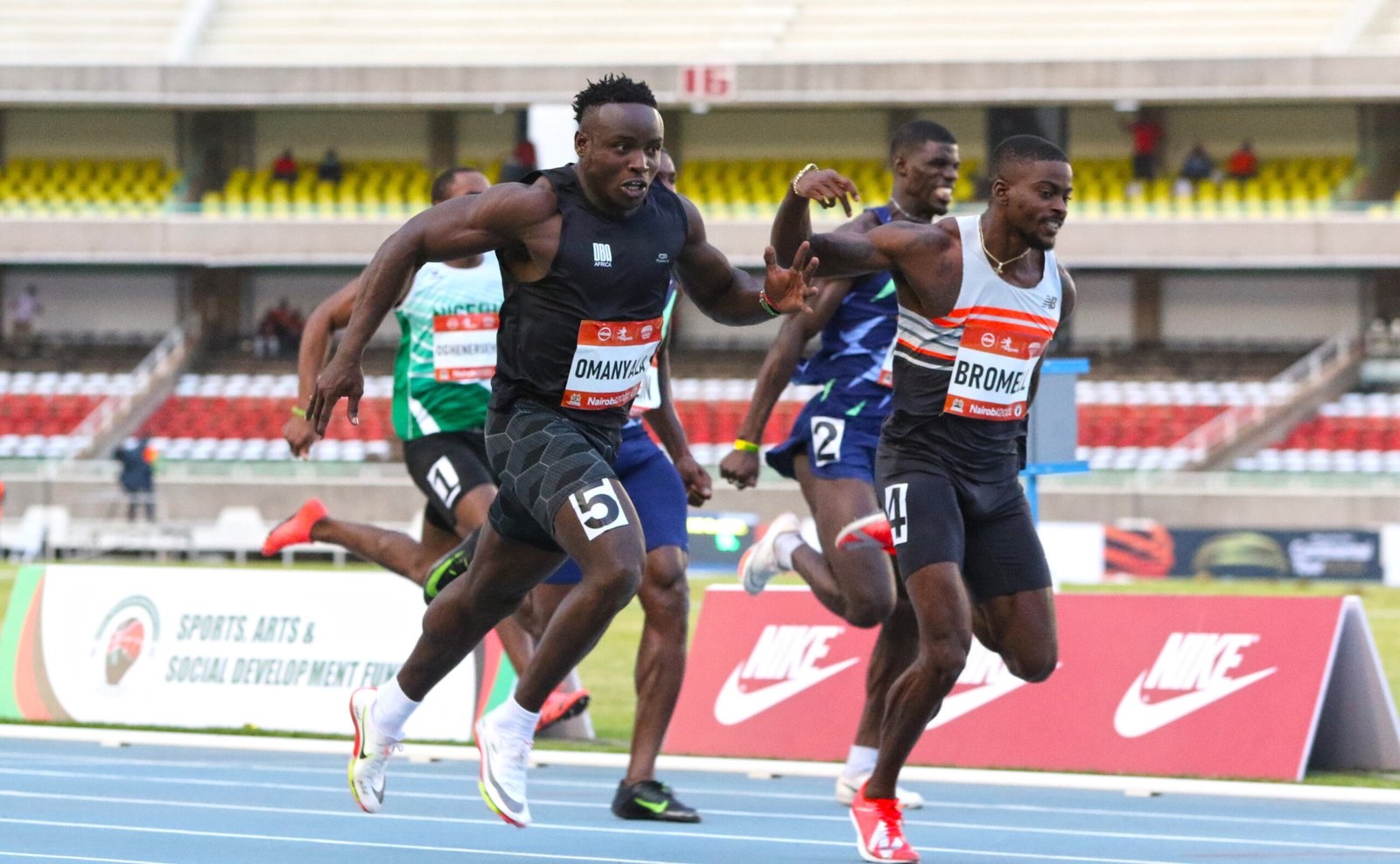 The second edition of the Kip Keino Classic, the season-ending meet in the World Athletics calendar provided a scintillating end to the campaign with jaw-dropping performances at the Moi Sports Centre Kasarani on Saturday evening.

It was an astute occasion for athletes to close down their season with the final leg of the second season of the Continental Gold Tour.

Sports Leo takes a breakdown of some of the best performances from the single day event in Nairobi’s capital. 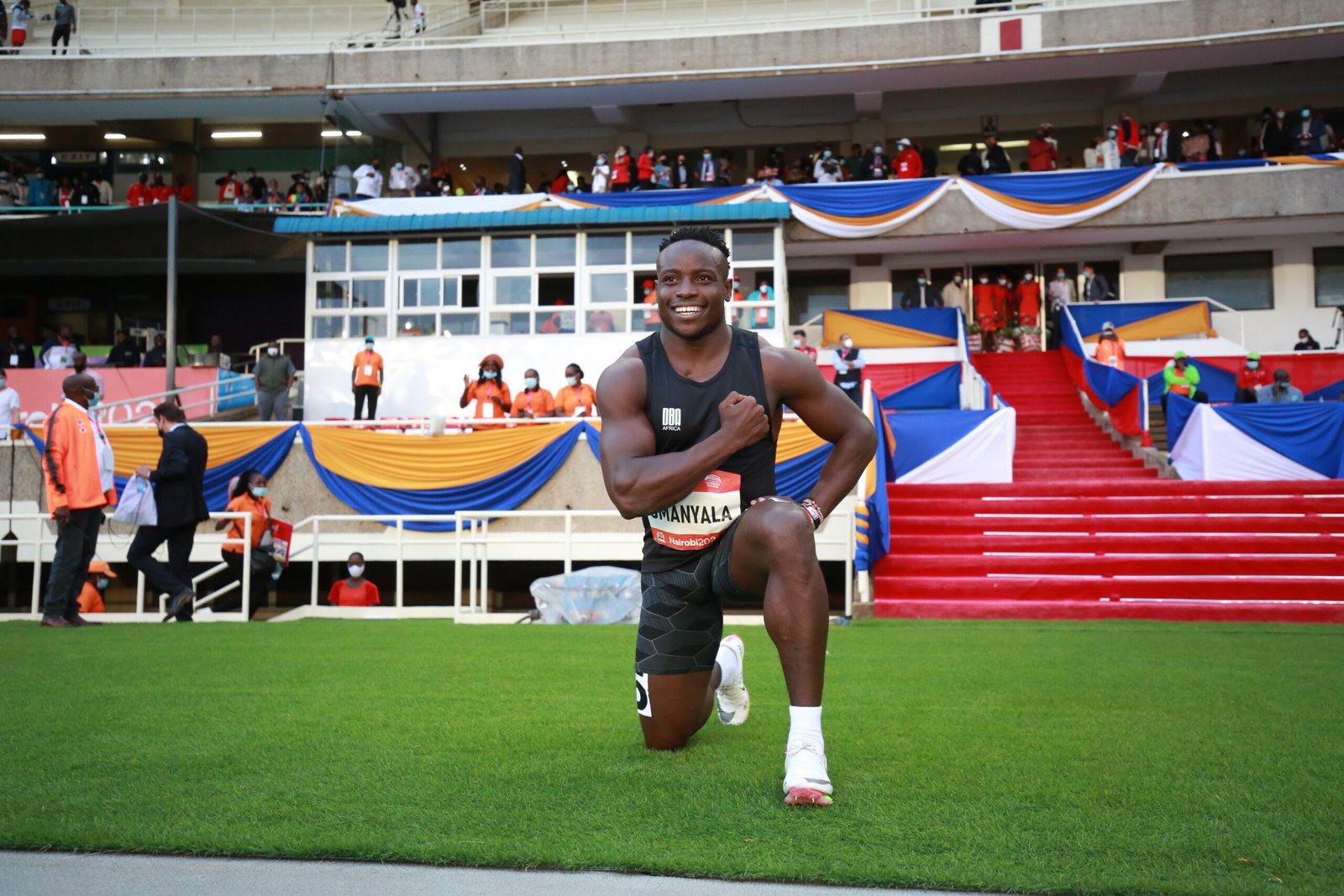 The best was definitely saved for the last; the fastest man this year, a four-time world champion and a Kenyan sprint sensation all lined up for the 100m final in the last even of the day.

Ferdinand Omanyala, the Kenyan record holder was side by side with the fastest man over 100m this year, Trayvon Bromell of the United States and four-time World Champion and 2004 Olympic Gold Medalist Justin Gatlin in what proved to be a quality field.

And the competition lived up to its billing.

Bromell, at the end of the day, powered home to win the race in 9.76secs, while Omanyala powered home in second in a new African and Kenyan record of 9.77secs. Gatlin was third in 10.03secs.

While victory was Bromell’s in a new World Leading time, all glory was on Omanyala who became the first Kenyan to run a sub-10 on home soil. He was also dipping under the 10seconds barrier for the second time in less than a month.

He had started slow off the blocks with the second slowest reaction time, but once he hit the 60m mark and looked up, he zoomed off to bridge the gap between him and Bromell. Despite a last dip of the head, the American just but managed to hold off for top spot.

Omanyala was applauded by the few fans who had come to the stadium, including President Uhuru Kenyatta.

So good and historic was Omanyala’s run in Nairobi that he had to be taken up the VIP dias to greet the Head of State, who was more than excited and had a fun buy moment posing for photos, a million fist bumps and hugs to Kenya’s newest sprint sensation.

-Christine Mboma does it again- 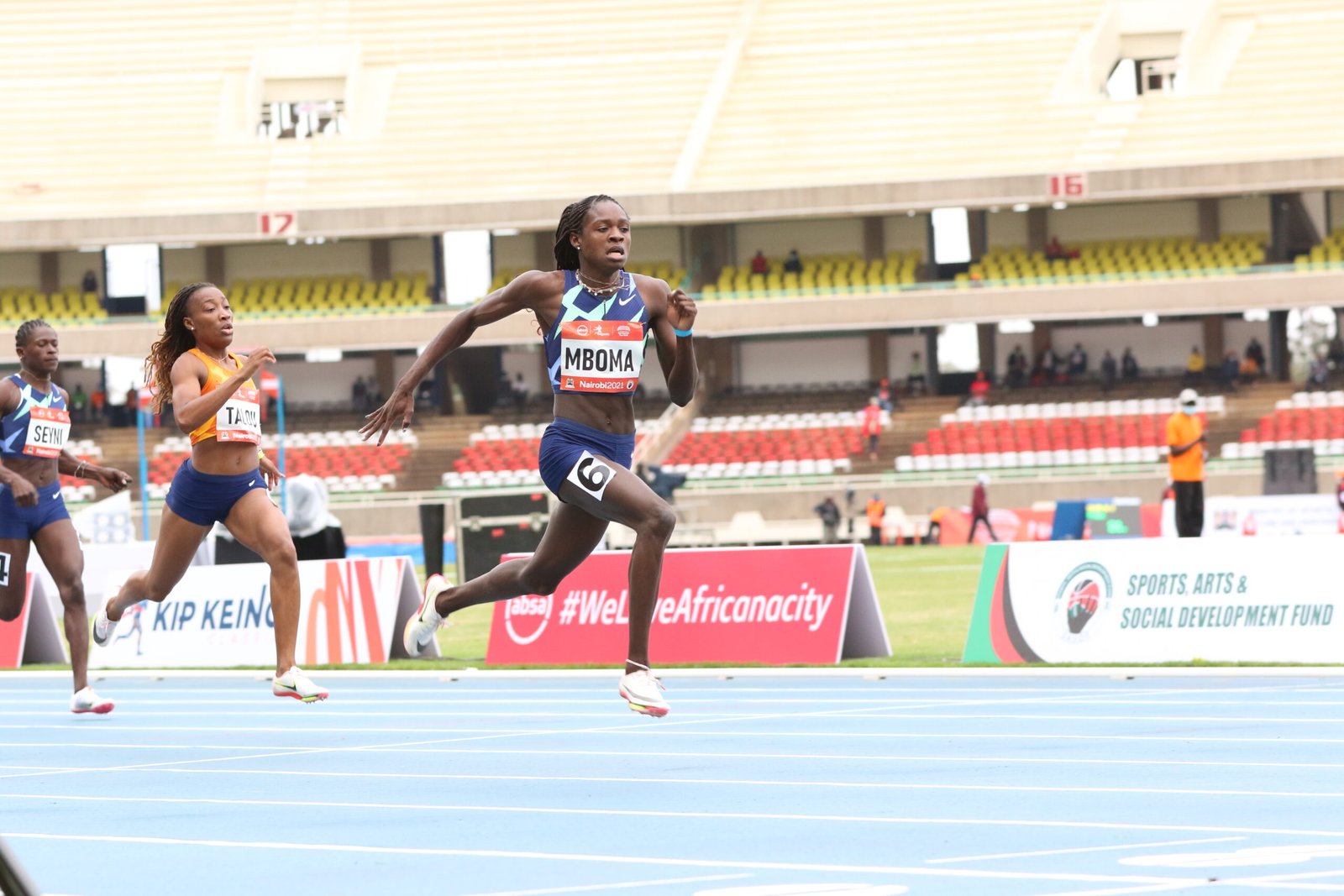 Christine Mboma powers to victory in the women’s 200m

After breaking the World Under-20 record at the World Athletics Under-20 Championships held at the same venue a month ago, Namibian sprint sensation Christine Mboma was at it once again.

The 19-year old blitzed to victory in the women’s 200m, despite a long wait for a start due to a faulty timer, and two false starts.

Mboma clocked a time of 22.39secs to storm to victory, beating experienced Ivorian Marie Jose Ta Lou, a 2017 double world wilver medalist. Ta Lou came in second with a time of 22.98 while Niger’s Aminatou Seyni was third in 23.33.

The Namibian had started off slow on the blocks and was perched towards the back at the home straight. But she had a great lift off for the final 100m, powering past the entire field and put a good gap between her and the ever green Ta Lou.

“I am happy to come back here and win and end my season well. Now I will just have to rest for a few weeks then start preparing for the new season. It has been a great year for me from winning silver at the Olympic Games and Gold here at the World U20 and I hope I maintain the same form next year,” said Mboma.

“I am so happy to be here honestly. As Africa we have asked for events to be staged here for a long time and it is such a huge pleasure for me to see a global event here today. I hope we get more and definitely I will be back to Nairobi,” stated Ta Lou.

The former 400m specialist came off the bend in first place then continued to pull ahead of Botswana’s Isaac Makwala, crossing the line in 19.76secs.

Just after breaking Kenya’s dominance in the steeplechase at the Olympic Games, Moroccan Soufiane El Bakkali showed that it was no fluke when he beat the Kenyans again on home soil, triumphing with a time of 8mins, 21.20secs.

All through the race, the Moroccan had sat in the middle of the leading pack. His towering frame giraffed across the field as he waited for an opportune time to strike.

Serem, Kibiworr, Ethiopian duo of Chala and Firewu Samuel stuck to the lead for most of the race. With two laps to go, El Bakkali started showing intent, galloping to the second spot.

At the bell, he was shoulder to shoulder with Kibiwott. After the first 100m of the final lap, the Moroccan moved upfront and trued to create a gap. Chala and Kibiwott however proved resistant.

At the last water barrier, he jumped in close proximity with Kibiwott and it was seen as though the tables would turn.

However, he had a more powerful finishing kick as he strode forward to clinch victory with Kibiwott second.

In the women’s race, Celliphine Chespol, who has battled with injuries since 2019, returned to winning ways after clocking 9mins, 30.55secs to win the race.

The expected showdown between 2015 world champion Hyvin Kiyeng and Olympic champion Peruth Chemutai didn’t materialise as both failed to finish. Kiyeng was stretchered off with what looked like a nasty injury after barely two laps. 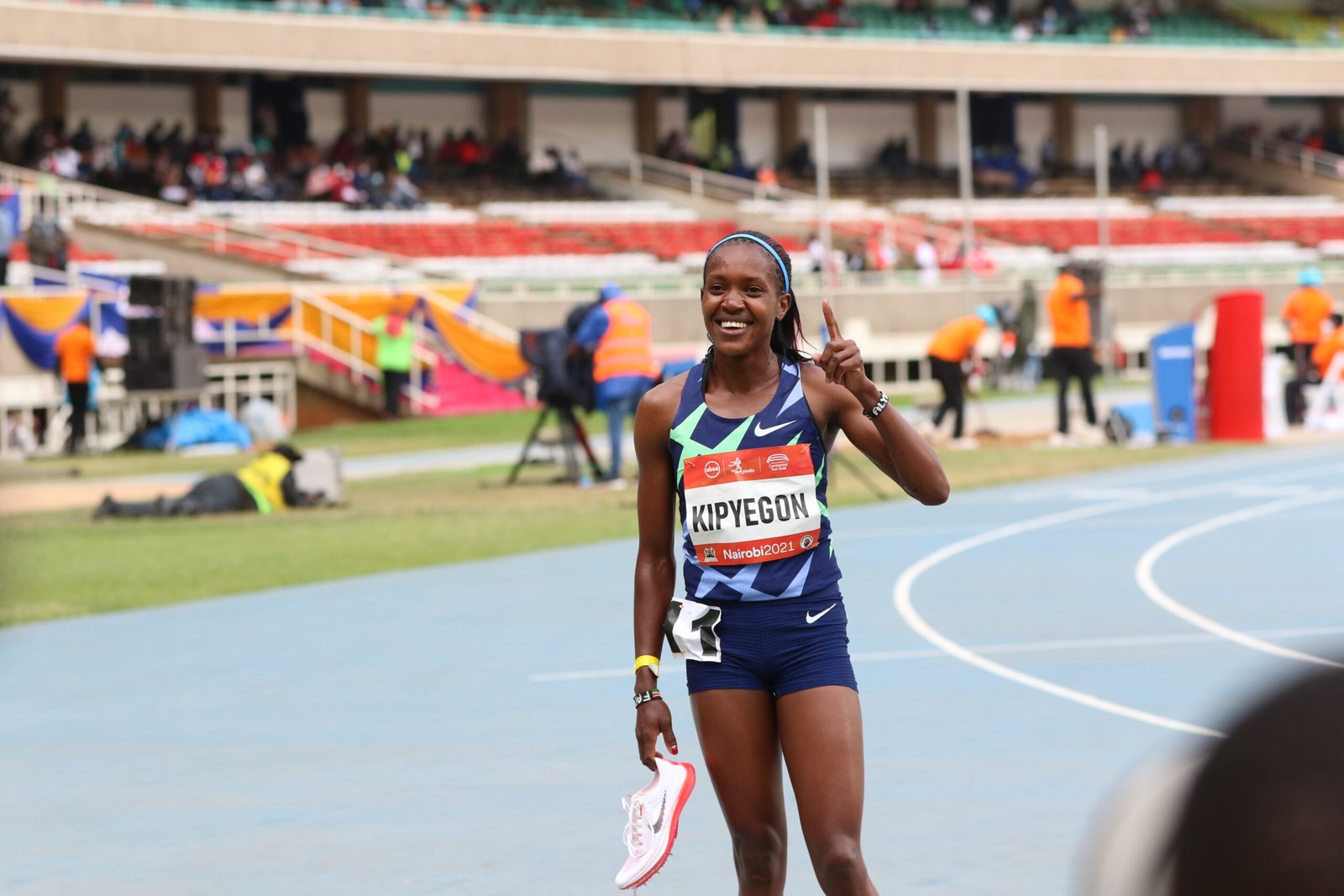 Faith Kipyegon all smiles after winning the 1500m

Double Olympic champion Faith Kipyegon easily dominated the 1500m race, once again proving that she is the greatest metric miler of all time.

Kipyegon easily won the race in 4mins, 02.40secs, holding off the Ethiopian duo of Hirut Meshesha and Hailu Freyweyni who finished second and third respectively.

“For me, the most important thing was not even to win but to compete in an international event at home. I have really yearned for this moment and I had waited for so long to do it. I am more happy with this than even the victory,” an elated Kipyegon said after the race.

In the corresponding men’s race, Vincent Keter added on a Continental Gold Tour title to his name after winning the World Under-20 Championship, winning in a quality field with a time of 3mins, 35.99secs.