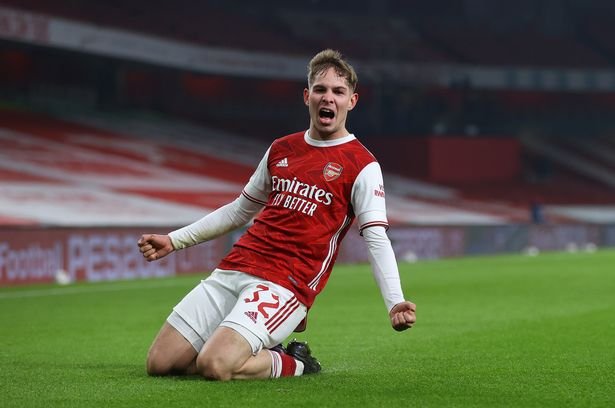 To say the least Rowe was the standing man, dominating the attacking midfield for Arsenal as they claimed the local bragging rights on Sunday with a 3-1 home win over Tottenham.

The 21-year-old ran riot in the first half as he broke the deadlock after just 12 minutes, making a trademark run into the box and sweeping home from Bukayo Saka’s cutback.

Fifteen minutes down the line, Smith-Rowe turned provider by setting up Pierre-Emerick Aubameyang to double the lead.

Arsenal dominated the first period and made it 3-0 before half time as Saka got his name on the scoresheet.

A late consolation from Son Heung-Min mattered little as Arsenal made it three wins on the bounce in the Premier League.

This means they are up to ninth place and, despite losing their first three games without scoring a goal, they find themselves only four points off the top four and five points off first place.

Smith-Rowe the star in north London

Taking to social media, the young English professional footballer did not hide his excitement saying it was the best day of his life.

There was no doubt that Smith-Rowe was the story of the day.

Having only turned 21 this summer, he already looks like he can go on and become a legend for the club.

He is the youngest player to score in a north London derby for Arsenal for seven years, since Alex Oxlade-Chamberlain was 17 days younger in September 2014.

His link-up play with Saka is simply fantastic, with both players having assisted one another five times already in the Premier League.

In the history of the competition, only Cristiano Ronaldo and Wayne Rooney (8) managed more assists to one another when aged 21 or younger.

There has been lots of doom and gloom around Arsenal this summer and at the start of this season, and understandably so.

Despite being the highest spenders in Europe this past transfer window, Arsenal are still significantly behind Manchester City, Chelsea and Liverpool.

They made a number of questionable signings but there are enough quality young players for fans to be optimistic about the future.

In Smith-Rowe in particular they have an attacking midfielder who can be a star for the next decade.