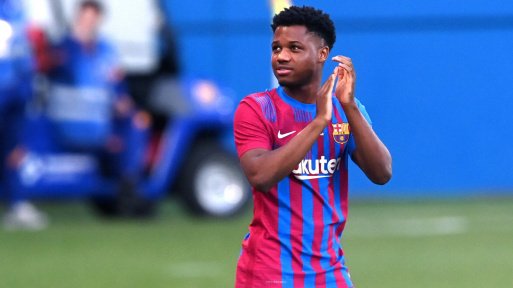 Exactly 322 days after being stretched out of the field in November 2020 after sustaining what seemed to everyone like a serious and long-term injury, which saw him sidelined from the football pitch for 11 good months, Barcelona and Spain national team youngster Ansu Fati is finally BACK.

On Sunday morning news all over Spain and Europe broke that Ansu Fati had finally managed to make it into the 18-man matchday squad but it remained unknown if he was to play or just another unused substitute.

In the match in which Barcelona was hosting Levante at the Nou Camp, the stadium erupted in jubilation as Fati stood on the touchline ready to replace Luke de Jong with 10 minutes of normal time remaining to play.

Wearing a new jersey number on his back, Fati was handed the iconic jersey number 10 that was left vacant by club and football icon Lionel Messi who departed to join France side PSG, Fati got on to the pitch meaning business.

With Barcelona leading 2-0 at the time of his introduction, it was clear Barca were heading towards a routine win against Levante, but the show was preserved for the last moments. In the dying minutes of the match, Ansu Fati finished stunningly to give Barca a third goal and headed straight to the Barca stands to celebrate with the medical staff and his family, it was so important that it took a whole five minutes for the whole Nou Camp to calm down after that goal.

Barcelona forward Ansu Fati celebrates after scoring on his comeback from injury against Levante on Sunday evening in a La Liga meeting. | PHOTO: Courtesy |

Before the injury last year, Fati was on course to be a regular goal scorer for the Catalans almost scoring or assisting at the same rate as Lionel Messi.

The Spaniard has now said that Barcelona is aiming to triumph in LaLiga and the Champions League this season after making a goalscoring return to action against Levante on Sunday.

Luuk de Jong had earlier doubled Barca’s lead in his fourth appearance for the club following his move from Sevilla after his Netherlands teammate Memphis Depay opened the scoring from the penalty spot.

It was the first time since March 2009 that two different Dutch players had scored in the same LaLiga game, Arjen Robben and Klaas-Jan Huntelaar last doing so for Real Madrid against Athletic Bilbao.

It has been a difficult start to the season for Barca following the shock departure of club icon Lionel Messi, with coach Ronald Koeman’s position the subject of intense scrutiny.

Fati, though, is expecting big things from the Catalan giants this season.

“We are Barca, we are going for LaLiga and the Champions League and all the competitions we are in,” he told Movistar. 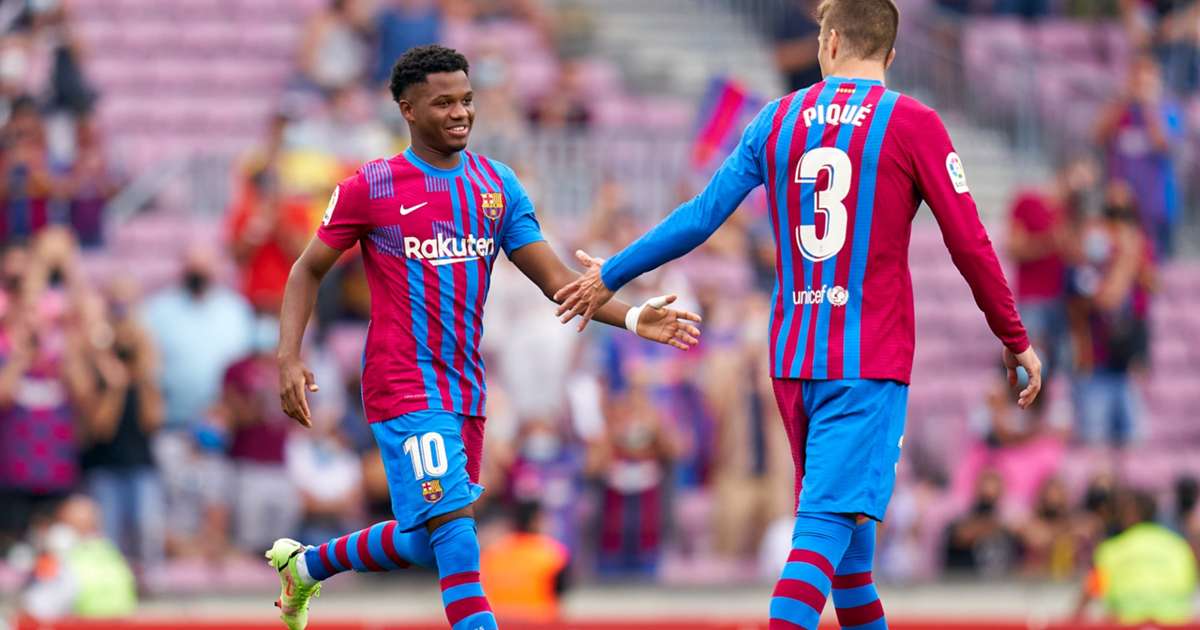 “All the teams want to win everything, but we are Barca and we have to fight for it.”

Despite inheriting Messi’s number 10 shirt in that period, Fati says he feels no pressure following in the Argentinian’s footsteps.

“I am proud to be able to wear it after Leo,” he added. “I want to thank the club and the captains for giving me the opportunity to wear it.

“It is not a pressure but I am grateful for wearing this number that has given a lot to this club.”

Barca’s assistant coach Alfred Schreuder oversaw matters on the pitch on Sunday with Koeman suspended from the touchline, and the Dutchman was delighted with the reception afforded to Fati by the Camp Nou faithful.

“The reaction of the stadium was evident, we know that he is a player who generates chances out of nowhere,” he said.

“We knew he could play for 15 minutes and this is the first step. We know that he is an excellent player, but also that he has been absent for a long time.”

Fati fitness is a big boost to Ronald Koeman’s side and records are there to prove that he is not just another player to ignore but a young player ready to make history with his boyhood club. Barca will be back in action on Wednesday when they travel to Portugal to take on Benfica in a UEFA Champions League group E meeting. It is a must-win for Barca as they currently sit bottom of the group after a humiliating loss t0 Bayern Munich at home a couple of weeks ago. They will then travel to Madrid to take on La Liga reigning Champions Atletico Madrid on Saturday.