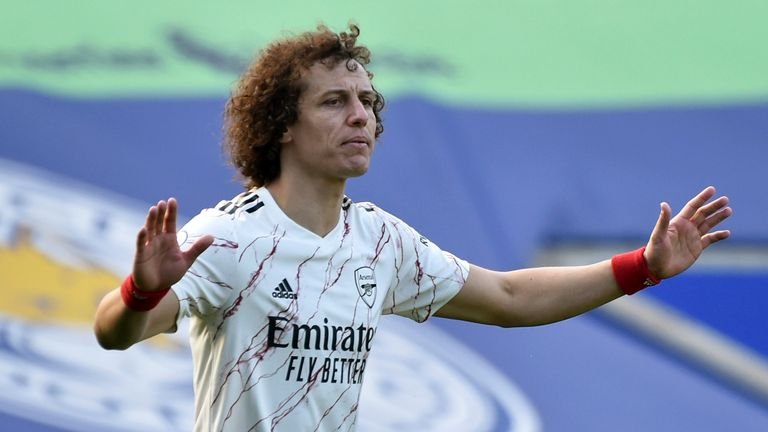 What Next For David Luiz After Leaving Arsenal By Mutual Consent

David Luiz is at his father home in Brazil mulling his options after exiting the Premier League side on Mutual consent after expiry of his contract at the Emirates.

David Luiz catching up with an English media outlet journalist reminds him of a scar he sustained on his right hamstring which is an identity of the good times in England.

The 34-year old talking from his parents’ home in the Brazilian region of Minas Gerais, had just finished a morning workout with a friend, looking tremendous in shape, evidenced by one muscle-bound picture from the earlier session. 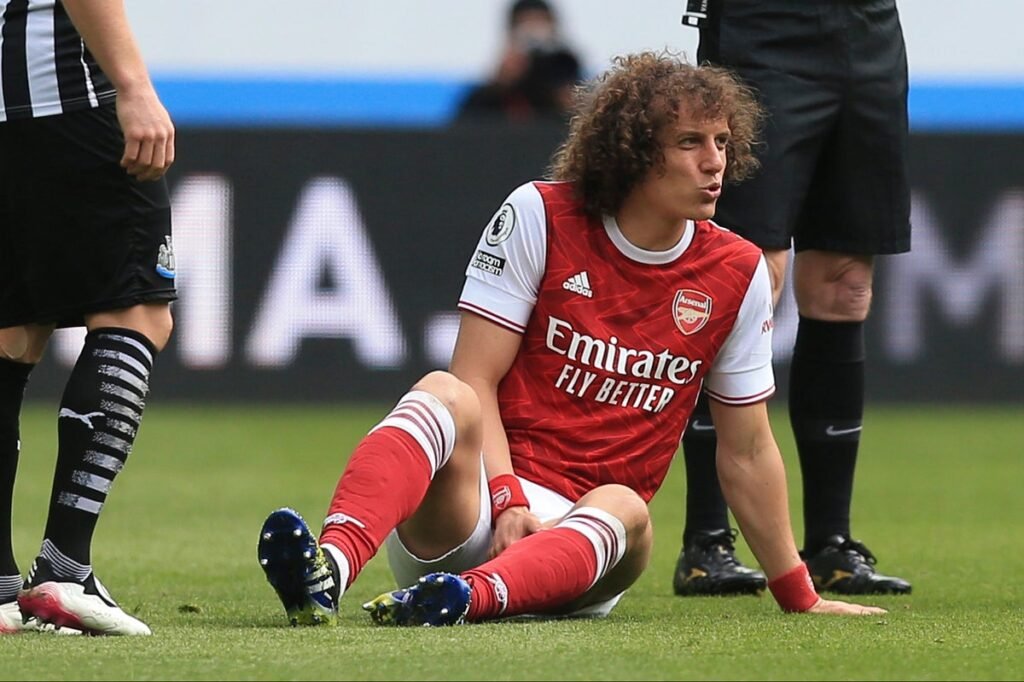 But, for now, this break is a chance to reflect on his time in the Premier League, not that he thinks those days are definitely over just yet.

In may this year Arsenal confirmed that David Luiz was not going to sighn another contract with the Club and here he explains why;

‘Both of us decided to split, I came for two years and the aim was to win something, which I did (the FA Cup and Community Shield). Now, I think the club has a different project for the long term. They have different ideas. My idea is to win, win, win as soon as possible.’

David Luiz said that Arsenal had wanted to rebuild their squad in preparation for the next season of which he thinks they are doing so.

He says his desire to continue winning trophies is still unbent and thus a reason why the defender has continually rejected several lucrative offers this summer, from the Middle East to South America and even the Premier League. Luiz reminds says that he has the medals at his home in London from every club he has played for – titles in Portugal, France and England — and mention of such leads us on to criticism of him in this country.

During his time in England playing under Mikel Arteta David Luiz came under heavy criticism from football pundit Jamie Carragher who was particularly vocal during his time at Arsenal, referencing ‘brain freezes’ and labelling the defender a ‘liability’. but Luiz has his answer for Caragher.

‘They talk and say, “This player is not right for this league”. Yet I won the league. These people have forgotten the past.

‘You cannot say, “David is a player who never won, you won’t win anything with David”. That is not true! You have to base your opinion on something real, not something fake.

David says that changing peoples perception about him is something he will not do as many people base their facts with hatred about players and especially him who was a subject of ridicule whenever Arsenal lost.

‘They have not analyzed me properly. I am not going to waste my time on that.

‘But I will always say every single time I trained or played, I did my best. I played with my heart. I never tried to run away from anything. I always showed my face. 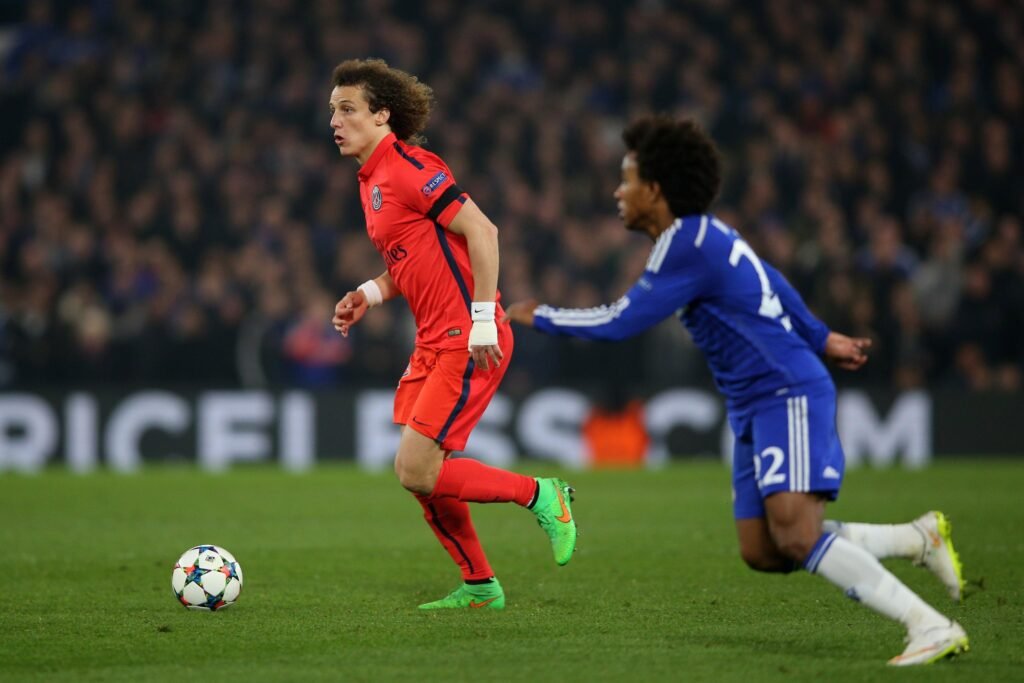 The Brazilian defender arrived in England almost more than 10 years ago, sighning for Chelsea in 2011 whereby in the following year he lined up in the Champions League final against Bayern Munich, in Munich.

It is at this point where he reached for his right hamstring and traces the wound from the subsequent surgery to repair a nine-inch tear.

‘This is the scar that I really love on my body!’ he booms, it serving as a memory of Chelsea’s first Champions League title.

Luiz played 120 minutes of the 1-1 draw and, in the shootout, placed his penalty into the top corner. Gary Neville called it ‘perfect’ on commentary.

‘I perhaps should not have played,’ he says. ‘But some special people encouraged me to take that step, to play even though I was not fit. They told me not to be scared. There was big pressure after that.

‘Roman Abramovich spoke to me on the day of the game and asked, “How is your leg?” I told him, “It does not matter, I play with my head and my heart”.he said.

But it could have gone badly wrong. Imagine if I’d been forced off after 10 minutes, or he made a mistake for a goal because he could not run? It was a big, big decision.so to say.

‘But I was the only Brazilian in this game, that meant a lot. I had many things in my head trying to block out the pain — the dream, the love, the adrenalin.

‘After the game, with the trophy, no one cared about my leg, not even me. It was only in the middle of the night when the adrenalin wore off that the pain returned.’

Luiz left Chelsea in 2014 for Paris Saint-Germain, where he won one domestic treble and one double, before returning to Stamford Bridge in 2016 and immediately helping them to the title.

With two signing involving his former clubs Chelsea and PSG, when asked to comment on this stories which have dominated headlines for a week now which involves Lukaku to Chelsea and Messi to PSG, Luiz says that;

‘Romelu deserves this move,’ he says. ‘I remember the day he missed the deciding penalty against Bayern Munich in the Super Cup (in 2013) and he was so sad, just a young boy. But he is not a kid now, he is a real man. I think he will prove to be amazing for Chelsea.’

And Messi? Luiz turned down a recent offer from Ligue 1. ‘Messi is a nightmare, it is better not to play against him!’

So what next for Luiz?

David Luiz says that he is assessing the summer transfer window situation as he seeks to know what his next move will take him to, but he believes that he wants to join a team that will win trophies,

‘I am working every single day. I want pressure, to be fighting for titles. I want that feeling of having to win every single week. That is why I have always played football, and why I still play. I want to feel alive.’

Luiz welcomed daughter Mallie into the world in November, and he recognizes she is entering a different one to that of his upbringing in Sao Paulo state.

It is not widely known, but Luiz and his parents run a small charity in Brazil. And that, he says, will be used to shape his own children.

‘I learnt my principles from my parents. We did not own a house when I was young but they always taught me to give and to share. When my life started to change financially, I wanted to keep those principles.

‘So we have a charity in my city with my mum and dad. It is just me and my family. What we want to see is people smiling, having food, clothes, a decent life. We are in 2021 and people are still hungry, or don’t have a toilet or bed or clothes for school. It is so sad to see. If everyone, one day a month, took 20 minutes to take something from their cupboards to give to others, the world would be a better place. I will teach my daughter to go the same way.’

For now, Luiz has to find his own way, for his footballing journey is far from over. which team would you want him to join?

What Next For David Luiz After Leaving Arsenal By Mutual Consent