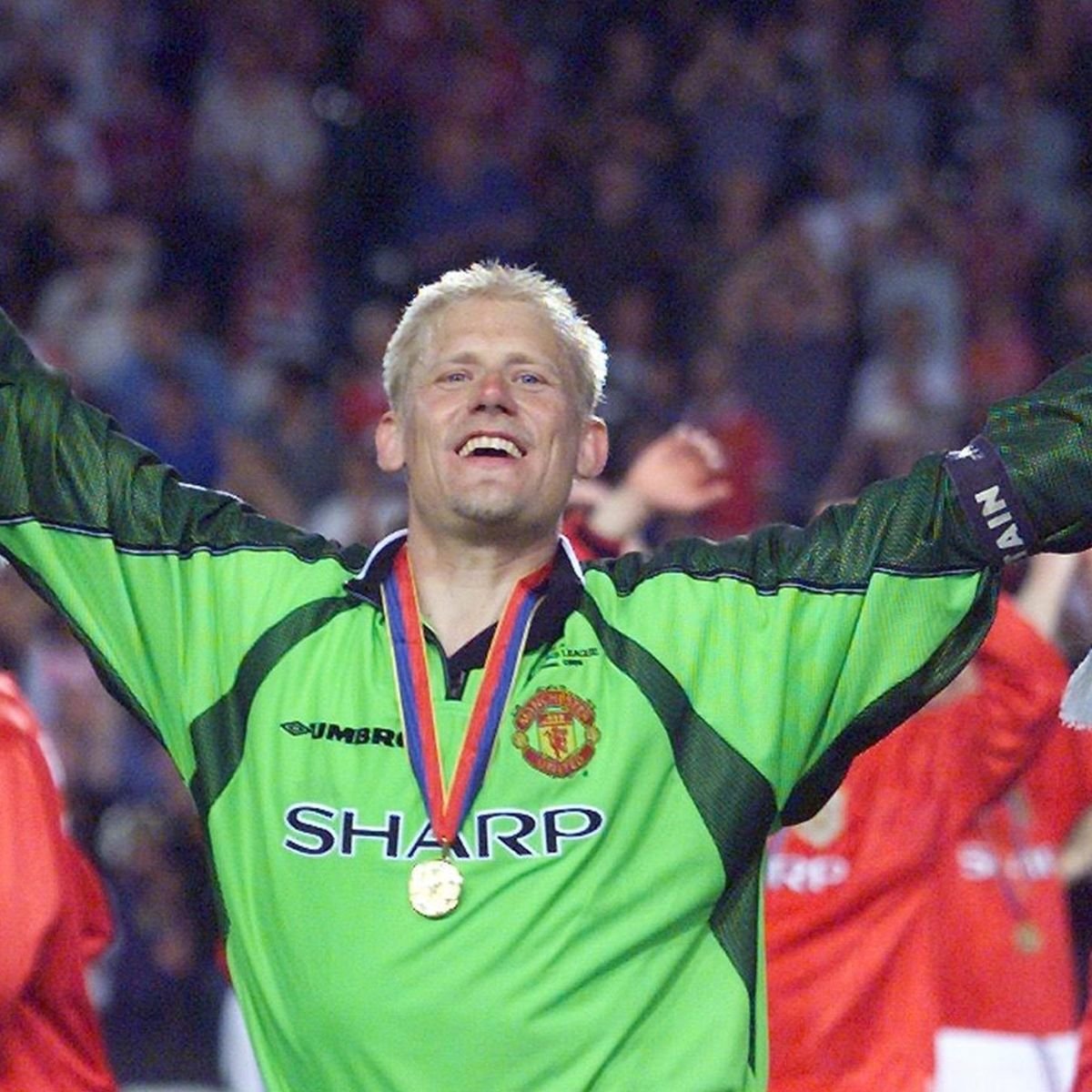 Signed by Manchester United from Brondby in 1991, in unlikely events that many people were doubtful of his goalkeeping abilities and the impact that United wanted from him.

Schmeichel first showcased his catapult long throw during a 2-0 victory for the Red Devils against newly-promoted Notts County on August 17, 1991.

In the eight years that followed, the Great Dane made countless barely-believable saves as he provided the foundation for five Premier League triumphs and a Treble. Here are some of his best…

Eric Cantona scoring the winner in 1-0 victories was a theme that much of United’s 1990s success was built upon. At the other end in many of those wins, Schmeichel often had to perform similar heroics to ensure that one goal would be enough, and at Highfield Road in November 1993 came one classic example.

Schmeichel had already denied professional Scouser Mickey Quinn on a number of occasions, but late on, journeyman Chris Marsden, on loan at the time from Huddersfield and fresh off the bench, burst into the United box, between Pauls Ince and Parker, to reach John Williams’ header.

From seven yards out, the midfielder unleashed a half-volley that appeared destined to make him an unlikely hero until Schmeichel flung out a right glove and somehow intercepted Marsden’s missile from reaching its target.

The most memorable Cantona and Schmeichel Show was filmed in front of a stadium audience of 36,583 and transmitted to millions on March 4, 1996.

United went to Newcastle having whittled down the Geordies’ lead at the Premier League summit from 12 points to four, but if Toon bums were squeaking, they didn’t show it during a first-half in which they battered the visitors.

None of the saves Schmeichel made during those early stages will rank as his most spectacular, but few will be seen as more important.

Two one-on-one stops from Les Ferdinand showcased the keeper’s best work on the night: the first he closed the door on the Newcastle striker while also bouncing him to the ground; the second his shovel hand parried a firm shot into the Tyneside air before recovering his feet and clutching the loose ball.

Newcastle’s belief ebbed away as Schmeichel gave United time to grow into the game. Cantona did his thing early in the second half, after which Schmeichel marshalled his defence towards a clean sheet.

Kevin Keegan accentuated the positives after the match – if Newcastle won their game in hand, they could re-establish a four-point cushion – but tears at St James’ upon the final whistle after the Red Devils’ ninth consecutive victory painted a more accurate picture.

One of the attributes that made Schmeichel so good was his absolute refusal to be beaten. That, combined with his physical assets, meant the Dane made numerous saves lesser goalkeepers could only dream of.

One of the first examples of this came during his first season at Old Trafford, which by the time Crystal Palace arrived in February, was starting to resemble a cow field.

Palace were trailing but pressuring United, whose fragility was starting to show as the season moved towards its final third.

Eddie McGoldrick waltzed inside off the right wing, leaving three red shirts in his wake before firing low towards the near post. Schmeichel blocked with his feet but the rebound gifted Simon Rodger with an almost open goal.

The United keeper tried to spread himself for the next shot, but Rodger’s initial mishit left him in the mud. By the time the ball was eventually struck from the six-yard line, Schmeichel was on all fours, but from that position, he managed to spring up and claw the ball away with his left hand.

“That has to be one of the saves of the season,” declared Martin Tyler. It most certainly was.

Further evidence of Schmeichel’s desire to keep his sheet clean came during a League Cup fourth-round tie in November 1993.

Preki bamboozled Bryan Robson and Gary Pallister on the right before squaring the ball for Simon Barlow. The young striker’s shot was parried into the air by Schmeichel, who had already saved Tony Cottee’s second-half penalty.

The rebound looked set to be headed in by Cottee, but he was denied by Schmeichel again, who remained in hot pursuit of the ball.

By the time Graham Stuart connected with a volley, Schmeichel had made 10 yards since the initial block before launching himself towards the Everton midfielder, who would’ve been forgiven for worrying more about his own personal safety than getting his shot on target.

As the lights went out on Stuart, the ball cannoned back off Schmeichel’s left-hand and finally away from danger.

Three and a half years later: same ground, same end, same result: a 2-0 win for United.

United, who were looking to break a five-match streak of failing to win after a European tie, led through Ole Gunnar Solskjaer and Cantona, but Everton rallied in the hope of making it another miserable return to domestic action for the Red Devils.

Their best chance came in the unlikely form of a David Unsworth bicycle-kick, which was kept out at point-blank range by Schmeichel’s left spade.

The goalkeeper was sat on the goal-line with the ball bobbling away to his opposite side and, more worryingly, Duncan Ferguson thundering towards it, smelling blood.

Schmeichel, though, shifted to his right and put his hands and head in Big Dunc’s path, smothering the ball and resisting the hard man’s attempts to bundle everything in his path into the net.

In November 1998, after some uncharacteristic mistakes with his huge frame creaking under the stresses of English football, Schmeichel announced he would be leaving United at the end of the season.

After a mid-season break in the sunshine, the 35-year-old returned for one last push at Old Trafford, and his efforts were instrumental in United’s greatest ever triumph.

One of his most memorable saves during that Treble campaign came during the Champions League quarter-final first leg against Inter Milan.

Dwight Yorke had put United 2-0 up by half-time, but the Italians were far from finished. Had Ivan Zamaorano’s diving header four minutes after the break not been met by Schmeichel’s star jump which saw the ball rebound away off his left paw, then progression would have been a lot less comfortable.

Schmeichel made two more superb saves from Nicola Ventola as Inter chased something to take back to the San Siro, where they made it uncomfortable for United regardless. Their keeper had to make a superb block to deny Ronaldo, giving Paul Scholes the platform to score a late equalizer on the night to finally extinguish Inter’s threat.

Schmeichel’s penalty-saving record was distinctly average for a keeper of his talent and presence. Before Denis Bergkamp stepped up in injury-time of the FA Cup semi-final replay in 1999, the Great Dane had stopped only the aforementioned Cottee spot-kick and another from Teddy Sheringham the following season.

So, as Bergkamp placed the ball with Arsenal’s and United’s seasons perhaps resting on the outcome, it had been five years since Schmeichel had kept a penalty out of the United net. Bergkamp at the time, though, was also uncharacteristically poor in spot-kick situations – three of his previous five for the Gunners had been saved.

There have been countless ‘What If Bergkamp scored?’ articles penned in the 18 years since that night at Villa Park, and of course, we’ll never know the answer.

But we know for sure that United would not have won the Treble, Arsenal would have taken the momentum into the league campaign and perhaps edged out United rather than the other way around. And maybe the Red Devils’ belief would have wavered when they went 2-0 down at Juventus in the Champions League semi-final the following week.

Schmeichel’s save could have been the difference between a Treble winning season and a trophy-less one.