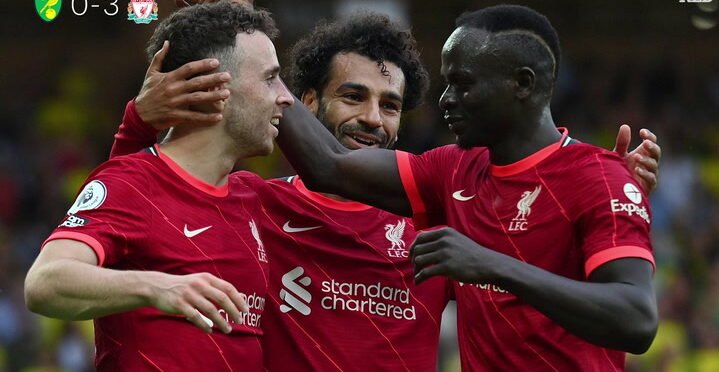 Liverpool got their Premier League title seek journey with a staggering performance against newly-promoted Norwich in a 3-0 win at Carrow road.

Diogo Jota, now in his second season with Liverpool was selected upfront with Sadio Mane and Mohammed Salah and opened the scoring in the 26th minute for the reds.

Roberto Firmino came off the bench having experienced a busy summer with his native Brazil after playing up to the COPA America finals and replaced Diogo Jota at the hour mark and quickly got into the score sheet. 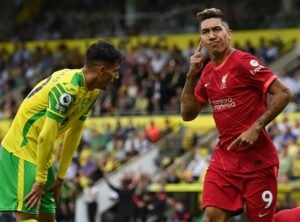 Salah claimed both assists for Jota and Firmino’s goals and added to his impressive performance with a fine finish himself to score the third goal for the 2020 Champions. In the process, Salah has now become the first player in the history of EPL to score on five consecutive opening Premier League weekends.

Tim Krul stretched himself and tipped over an 11th-minute header from Portugal forward Diogo Jota before his opposite number Alisson was also tested by Forward Teemu Pukki.

Teemu Pukki got in behind the returning Virgil van Dijk on the run of Todd Cantwell’s dinked through-pass and Alisson had to save sharply at his near post in the 19th minute to deny Norwich an opener.

An entertaining back and forth developed before Salah saw his Volley attempt go wide from a chipped delivery by Sadio Mane and not long after, Liverpool found the breakthrough after Salah failed to control Trent Alexander-Arnold’s cross with the ball falling for Diogo Jota who smashed it into the back of the net.

Salah made good contact on the volley when a left-wing corner was cleared partially by Norwich defense, with his strike blocked by Ben Gibson before Pierre Lees-Melou got in the way of Joel Matip’s follow-up to deny Liverpool a second and end the first half with the scoreboard 1-0 in favor of the visitors.

Last clearance Norwich defending continued early in the second half as Max Aarons and Grant Hanley combined to deny Mane.

Injured left-back Andy Robertson was replaced by Konstantinos Tsimikas, and his attempt stung Krul’s palms after one hour of play and the second goal ultimately arrived when Salah retrieved another blocked Mane effort and cut the ball into Firmino’s path for a simple finish.

Salah eventually scored his goal deservedly when he picked up a Ben Gibson clearance and curled impeccably beyond Krul and into the top-left corner to give Liverpool a 3-0 lead. 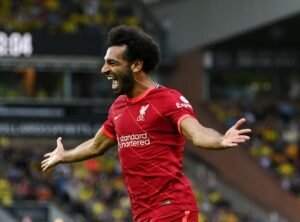 Despite more attempts by the reds and the long possession spells by Norwich in an attempt to break Liverpool’s high line, the match did not see another goal and ended 3-0 in favor of the visitors.

Liverpool host Burnley at Anfield in their first home game next weekend whilst Norwich’s fall start into the campaign will continue with a trip to Champions Manchester City.