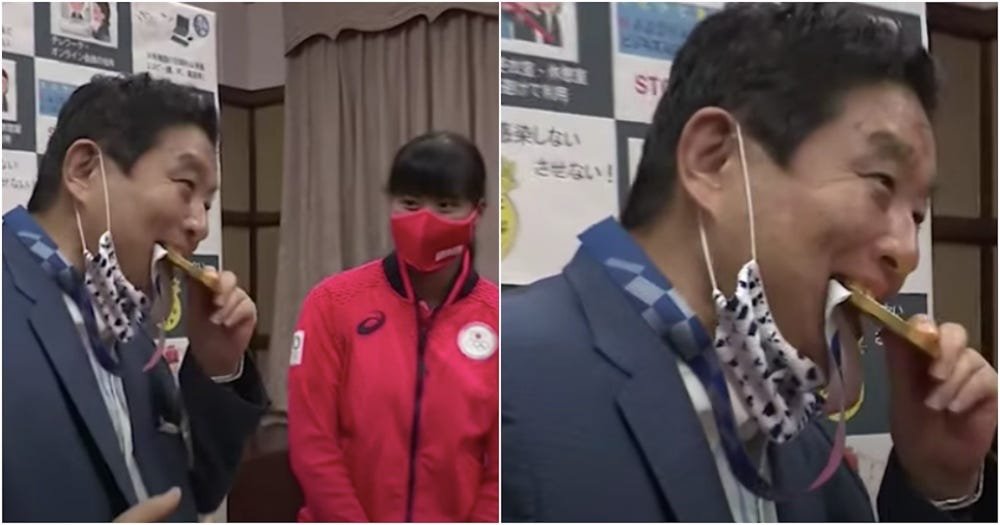 Japanese Mayor for Nagoya Takashi Kawamura will take a three-month pay cut following an incident where he bit an Olympic gold medal belonging to a Japanese softball medalist.

Kawamura was pictured taking a chomp at Miu Goto’s gold medal while making an appearance for Japan’s softball team.

This incident drew a lot of criticism from the public promoting action to be taken against the mayor.

As punishment, he will forfeit $13,000 pay for three months, Kyodo News reports.

Addressing the press on the matter following 7000 complaints lodged with Nagoya government over his actions, he said he is ready to part with 1.5 million yens as punishment.

He added that it was a bad show of moral responsibility which he is ready to atone for.

“I feel morally responsible,” he stated.

He owned up to his mistakes directing his apology to Goto and the Japanese people.

“I disgraced the occasion and offended Goto and the Japanese people.”

Goto hails from Central Japan and visited the mayor on August 4 at City Hall for celebrations after clinching victory in the Summer Olympic Games in Tokyo.

Kawamura asked Goto to hang the gold medal around his neck as they posed for a photo.

It is then that he bit the medal.

The Nagoya Mayor has also been accused of making sexual advances at Goto during the event.

He is reportedly said to have asked Goto “Are you prohibited from having romantic relationships?”

The 72-year-old mayor said he will not resign because his thoughts are on serving his Nagoya constituents.

“With support from the International Olympic Committee and in line with her own intention, Ms. Goto’s medal is now set to be exchanged for a new one,” Tokyo Olympic officials said.