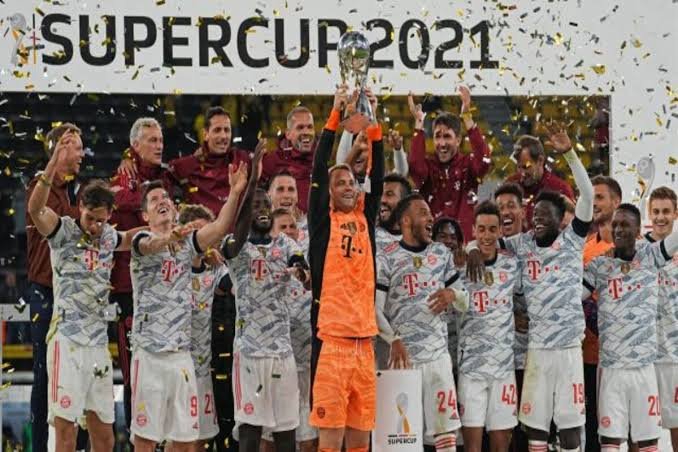 In a thrilling encounter between the Bundesliga winners and the DFB-Pokal winners, Bayern Munich emerged victorious at Signal Iduna Park, Dortmund’s home stadium in what was the third Supercup meeting between the Klassiker rivals, Bayern has won all the three meetings.

Lewandowski who broke Gerd Muller’s long-standing Bundesliga record of 40 goals in a single season with 41 goals in the 2020-21 Bundesliga season opened the scoring two days after the Bayern and Germany great’s passing at 75 years of age.

Dortmund were their own worst enemy from kick off, with Serge Gnabry, Muller and Kingsley Coman all missing chances chances after sloppy play from Marco Rose’s team.

Dortmund’s Youssoufa Moukoko, the youngest goalscorer in Bundesliga history, thought he had put his team ahead in the 36th minute only for the offside flag to halt his celebrations, before Neuer kept out Erling Haaland.

Bayern made their fortune count, Lewandowski floating into the area to direct a thumping header beyond Gregor Kobel.

Lewandowski was involved again as, four minutes after the break, Bayern doubled their lead, the striker doing enough to prevent Kobel from collecting Alphonso Davies’ cross, with Muller turning home. 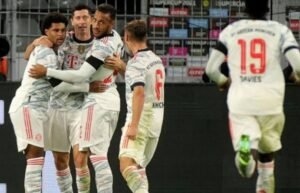 Dortmund seemed to have an immediate lifeline when Haaland raced through and slotted home, but the offside flag again came to Bayern’s rescue.

Bayern’s lead was cut in stunning style after the hour mark, Reus curling a staggering first-time strike into the top-right corner.

Despite the backing of much of the limited-capacity crowd, Dortmund’s comeback hopes fell flat 16 minutes from time as Corentin Tolisso pressured Akanji and Lewandowski picked up the scraps to round matters off.

In May, Nagelsmann’s RB Leipzig side were thrashed by Dortmund in the DFB-Pokal finals, as the 34-year-old’s first coaching appearance in a final fell flat. Yet Bayern, under his lead, perhaps laid down a marker for what is to come this term, despite the loss of some club senior members like Jerome Boateng, David Alaba and Javi Martinez.

This is Nagelsmann’s first trophy as a coach, while Bayern have now won the Supercup on nine occasions, three more than Dortmund, who are their nearest rivals in that regard. It was not always convincing on Tuesday, with Dortmund creating plenty of chances, but the Bavarians just had too much quality at the other end. 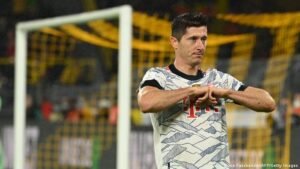 Gerd Muller’s passing this past weekend was felt greatly not only by Bayern, but German football, and there was an emotional tribute before kick-off at Signal Iduna Park in honor of one of the greatest German footballer.

Lewandowski overtook the Bayern legend as the player with the most goals in a single Bundesliga season with his remarkable 41 goals in the 2020/2021 season, and the Poland star has now netted in 14 consecutive games across all competitions, meaning another Muller record is in his sights, with Muller having scored in 16 successive matches in 1969-70.

Dortmund prolific striker Erling Haaland on his side kicked off his Bundesliga campaign with two goals and two assists against Eintracht Frankfurt on Saturday, though the youngster could not get on the scoresheet last night, despite what was by no means a below-par performance by his team.

He was denied brilliantly by Neuer in the first half, just adjudged to have strayed offside when he netted after half-time, before he teed up substitute Donyell Malen only for the Netherlands forward to be caught unawares. Haaland, like Lewandowski at the other end, had 34 touches, yet whereas the Norwegian managed only two attempts, his Poland rivals had six attempts.