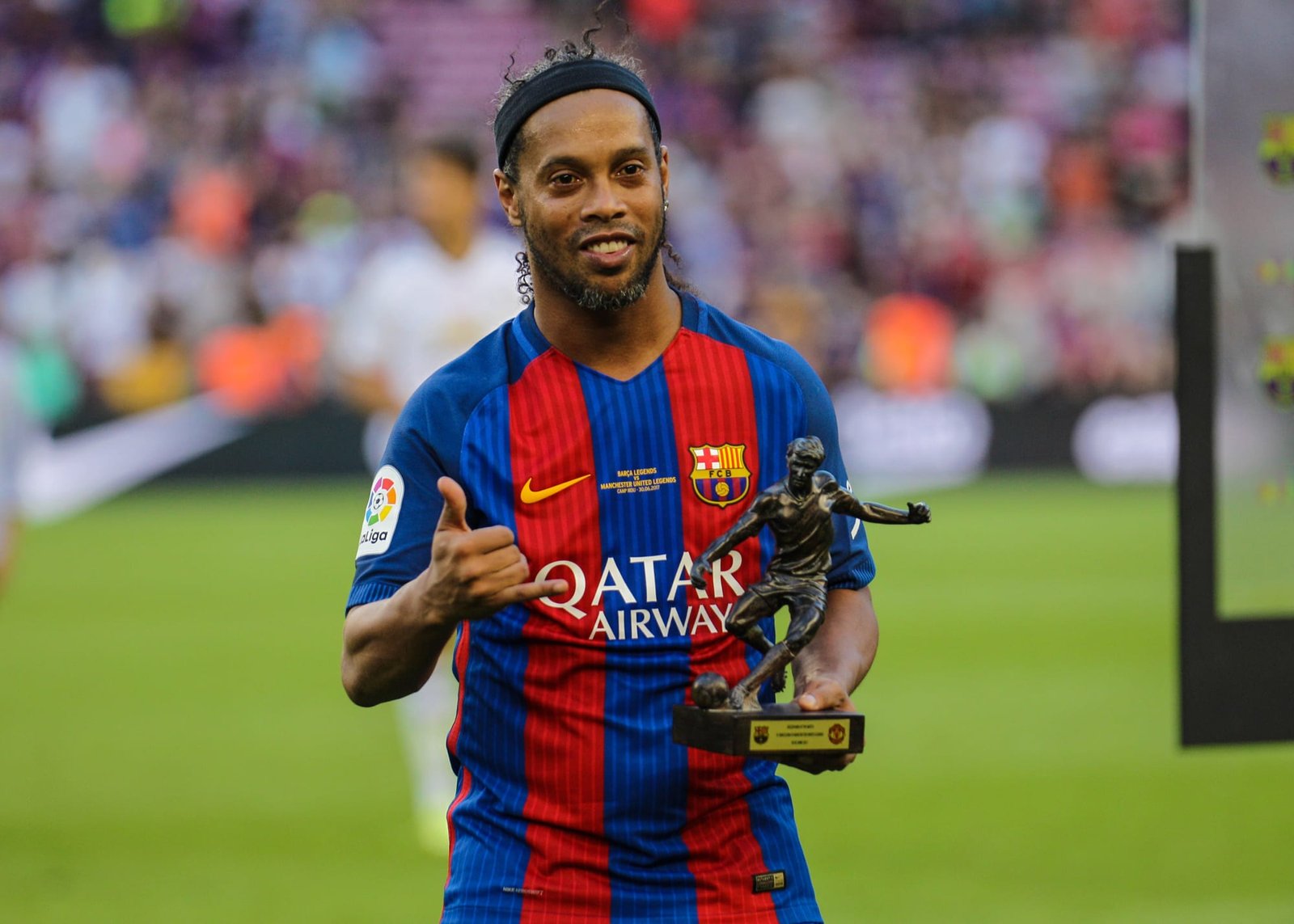 From PSG TO Barca, Ronaldinho’s low Key Transfer That Forged A Legend

Ronaldinho Gaucho will always be remembered even when the sporting world comes to an end if that time will ever happen in future, this is the man that will be always be remembered for the great foot-works in football that has never been witnessed before, a man, a Brazilian professional who played to entertain.

The iconic football legend image of him lifting Argentine Lionel Messi on his back after the 17-year-old Argentinian scored the first of 672 Barcelona goals endures and has become all the more noteworthy after Messi mirrored the move of Ronaldinho. While the Brazilian went from PSG to the Camp Nou, Messi has done the opposite.

But while Leo will likely spend the twilight years of his career at the Parc des Princes, it was in that stadium that Ronaldinho transformed from one country’s next big hope into the world’s favorite footballer.

Following his brilliance at the Copa America in 1999, it became painfully clear to even the most hardened of Gremio ultras that Ronaldinho’s future lay in Europe. Five years earlier, Ronaldo was plucked from Cruzeiro by PSV following the 1994 World Cup. 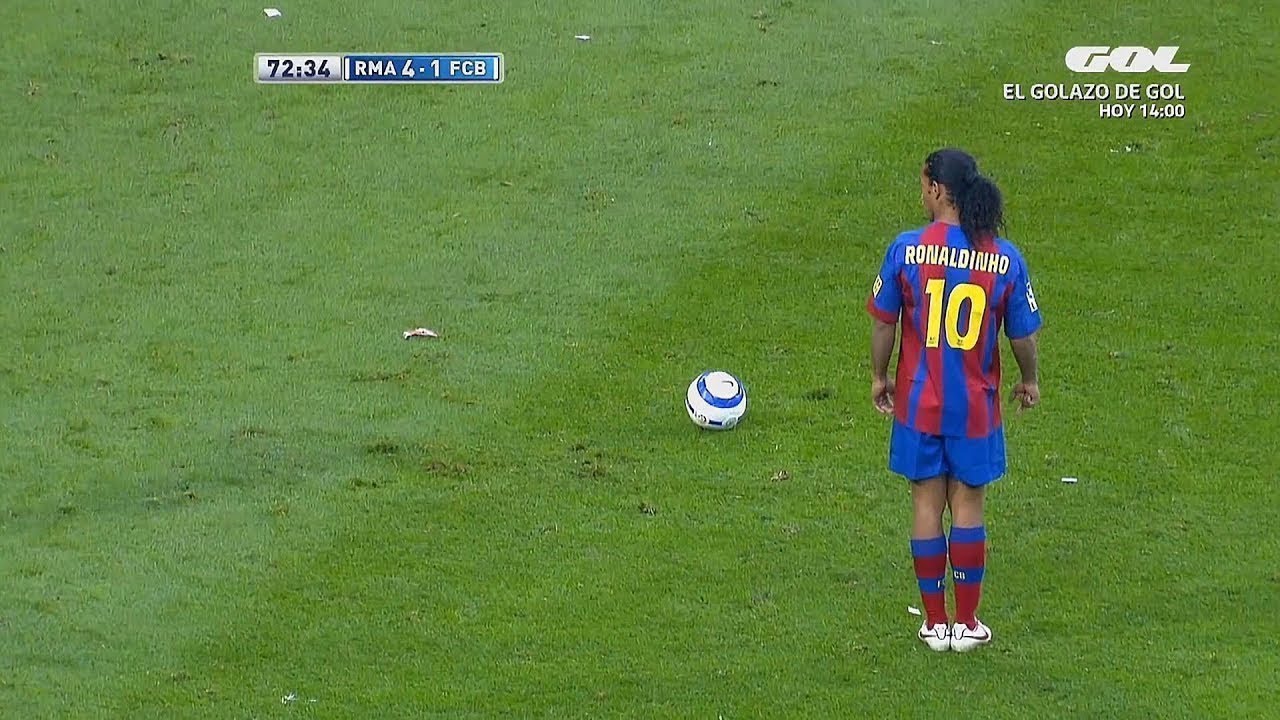 Inter Milan were desperate to partner Ronaldo with the next great Brazilian talent but they faced competition from Arsenal, Barcelona and Borussia Dortmund. In the end, Ronaldinho opted for a low-key move. Yes, the club that has just signed Messi was considered low-key just over 20 years ago. But there was logic to the choice. With the Japan-South Korea World Cup the following summer, he did not want to risk becoming a benchwarmer for a European giant.

It was anything but a smooth process, however. December 2000 saw PSG announce that they had agreed to sign the attacker in a pre-contract agreement, declaring that Ronaldinho would arrive in Paris in the summer ahead of the 2001-02 season. The only issue was that this was the first Gremio had heard of the deal.

FIFA were brought in to adjudicate. In the meantime it was decided that Ronaldinho could not play until the matter was resolved, leaving him sidelined for months. His agent even looked into getting him a loan move to St. Mirren in order to maintain his match sharpness. Desperate times and all that.

The journey of the Brazilian started at a low note unlike nearly everything he had done on the pitch, his Parc de Princes career started slowly. The top scorer from the club’s previous campaign, Lauren Robert, had been sold to Newcastle to make way for Ronaldinho. The pressure was on from the start.

His FIFA-enforced ban was only lifted in time for the Brazilian to appear in the second game of the Ligue 1 season once compensation had been paid to Gremio and, suddenly among a wealth of famous faces, a spot in the starting XI was not guaranteed.

This time round the current PSG coach Mauricio Pochetino was his coach while the likes of Gabriel Heinze and Nicolas Anelka also floated around the training camp. The most important of his new colleagues, however, was Jay-Jay Okocha. 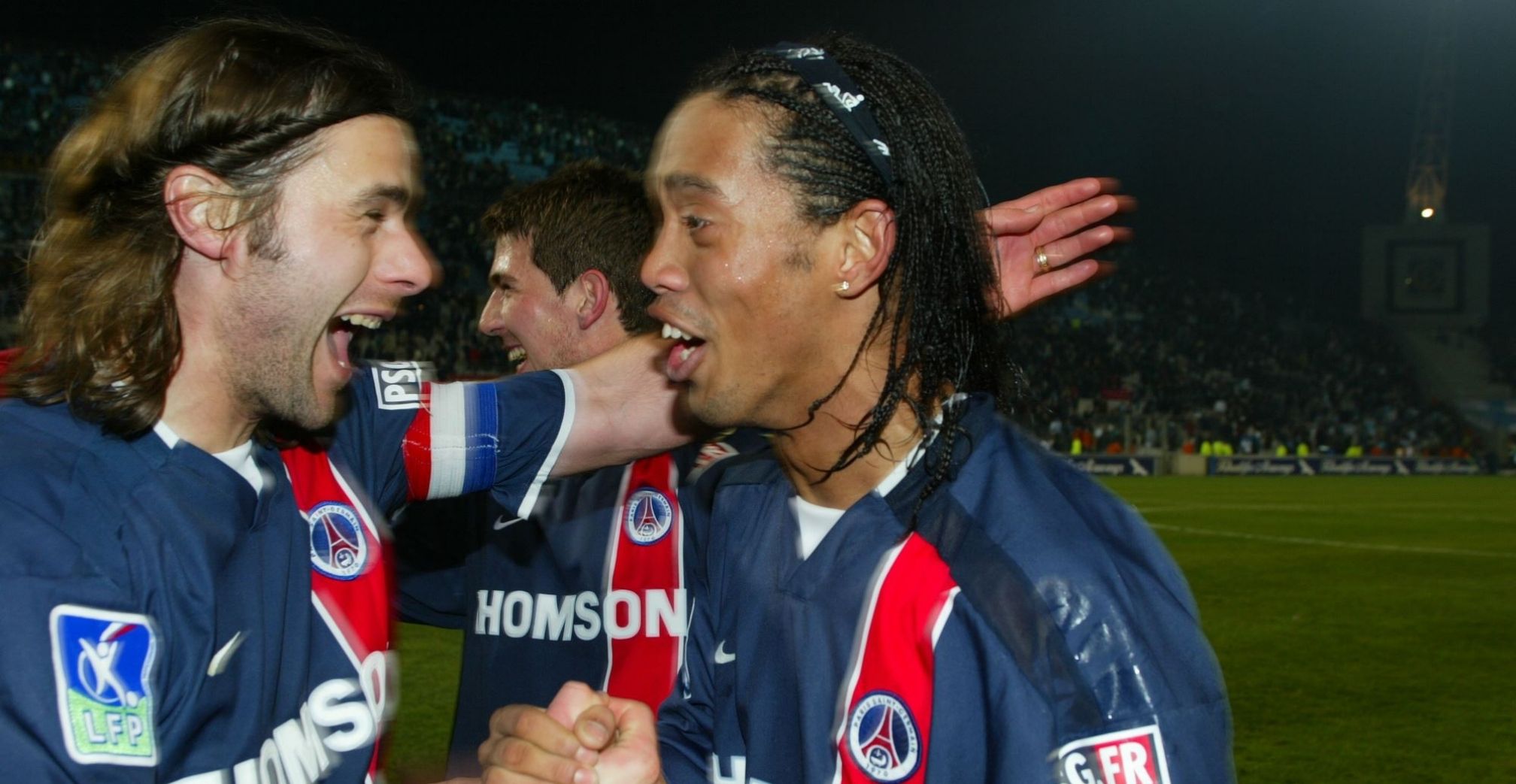 “He was like my kid brother,” the Nigerian trickster said of Ronaldinho. “I realized he was just so talented and he just needed someone to guide him.” Before the Brazilian, Jay Jay Okocha was the fun loving footballer who children around the world were looking ahead for and Were it not for him, we may never have seen Ronaldinho at his mesmeric best.

“Ronaldinho tried to imitate some of my skills and dribbles,” the Bolton Wanderers icon said in a 2017 interview.

Two assists and one goal from the penalty spot was all Ronaldinho had to show from his first 13 games in Europe. By this point, Kaka was on the charge back home, the baby-faced Sao Paolo maestro suddenly the fancied starter in the Selecao attack alongside Rivaldo and Ronaldo.

Who doesn’t remember Ronaldinho, what are the stand out physical characteristics of the Brazil and Barcelona legend? His agility? Sure. His smile? Who could forget? His hair? Exactly.

Upon his arrival on European soil, Ronaldinho was still rocking what was closer to a buzzcut than the iconic flowing locks that have soared behind him and bobbed teasingly in front of chasing defenders since. It is not that he could never perform with that particular style, he terrorized the entirety of South America in 1999 with that one-all-over look but perhaps certain locations demand certain hairdos.

A glimpse at all of his goals during Ronaldinho’s time at the Parc des Princes, shows a man growing in confidence as his hair grew in length. Correlation does not equal causation but it is hard to miss.

His opening goal for the club, a penalty against Lyon, was followed by a brilliant brace against Rapid Vienna. But it was at the start of 2002 that the world truly saw its first glimpse of the world-class player Ronaldinho would become. Okocha was sent on international duty with Nigeria and Anelka was sent on loan to Liverpool, the Frenchman’s relationship with Fernandez now strained to its breaking point.

A clash with Troyes just over a month later saw the birth of another Ronaldinho feature we would grow to love. After already finding the goal once, the Brazilian set off on a rampaging run from inside his own half, evading the dive of one desperate defender as he did. The defender’s terrified team-mates continued to back off, allowing Ronaldinho to poke home brilliantly with his right foot. Cue the shaka celebration. The first of many. 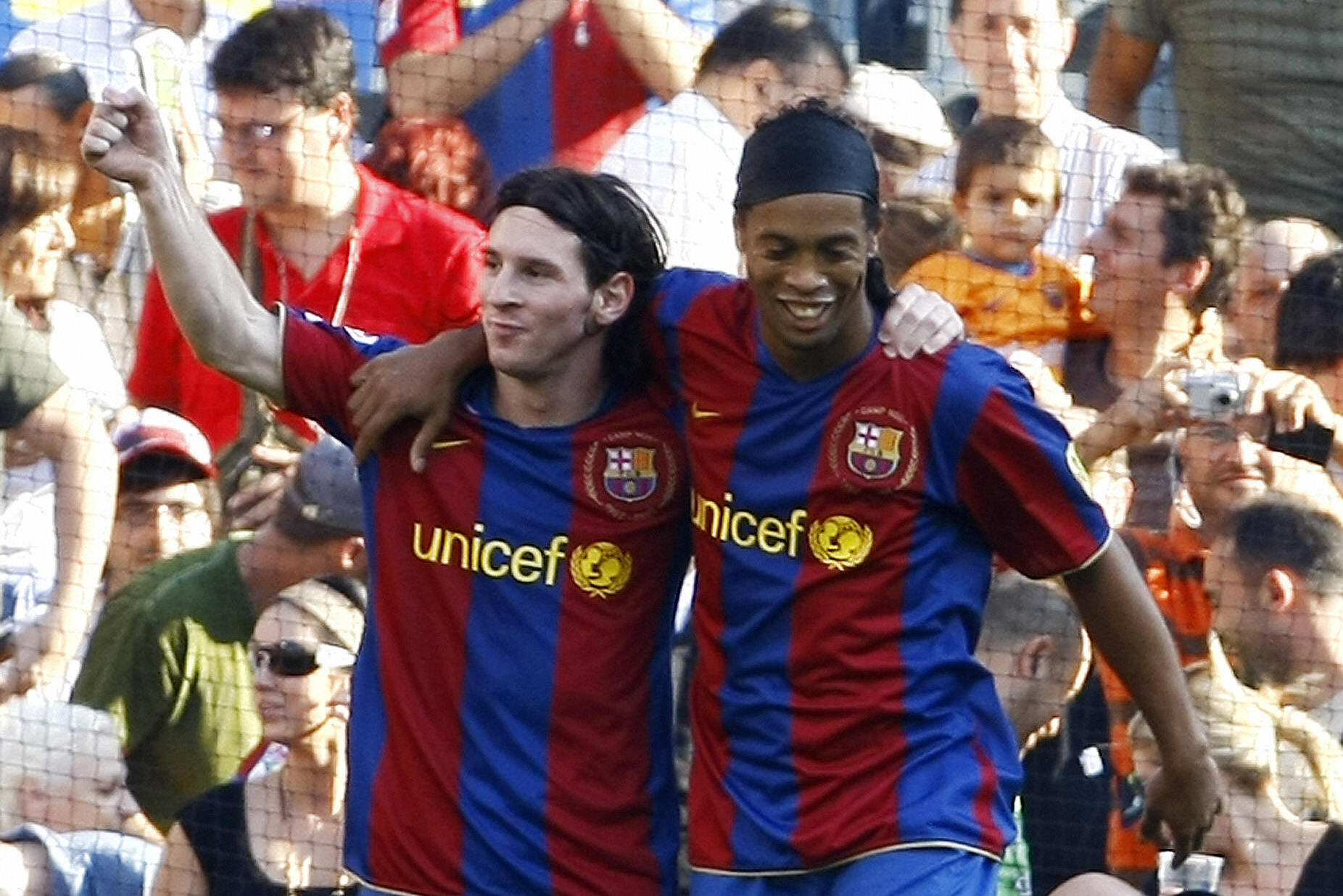 The 2002-03 season did not bring a lot more consistency on the goal-scoring front for the new World Cup winner, his relationship with his manager continuing to worsen as well.

After a short Christmas break, Ronaldinho was due back to train on December 28, as were the entire team. Instead, he chose to elongate his time in Brazil, turning up five days after his colleagues.

The player was an enormous financial asset to the club, especially as Fernandez’s side continued to struggle in Ligue 1. In a clash with Monaco, Ronaldinho killed a cross-field ball perfectly on the edge of the penalty area, and, in the blink of an eye, had rounded his marker and slotted the ball into the bottom corner from a tight angle. His opponent was left confused by the blur of feet and hair left in front of him. But Ronaldinho was long gone.

The best thing about Ronaldinho, of course, is the fun he brought to the field. Sure, goals were great, but if they weren’t beautiful were they even worth scoring? Against Guingamp, a neat one-two was played in midfield before the ball was ingeniously lofted over an oncoming tackle, taken beyond two more defenders and chipped over the goalkeeper.

Perhaps the growing hair was indicative of a growing sense of freedom felt on the pitch instead.

As Ronaldinho was making a mockery of French defenders, newly elected Barcelona president Joan Laporta pondered how to improve his club. There was a simple answer.

“I said we would lead Barca to the forefront of the footballing world, and for that to occur we had to sign one of these three players, David Beckham, Thierry Henry or Ronaldinho,” he said before the summer transfer window opened in 2003.

Once the interest was registered, a move was inevitable. PSG, like Gremio before them, were now resigned to losing Ronaldinho. Manchester United were also eager to bring the hypnotic attacker to Old Trafford, so PSG, who could only muster an 11th place finish in the previous campaign, never stood a chance.

Despite being spotted in London clubs on multiple occasions, something that perhaps concerned Sir Alex Ferguson, Dinho plumped for the Camp Nou.

And so to Catalonia he went, leaving a scene in Paris of pissed off managers, pissed off team-mates but thousands of adoring fans. With him, he took the status of football’s future king.

From PSG TO Barca, Ronaldinho’s low Key Transfer That Forged A Legend