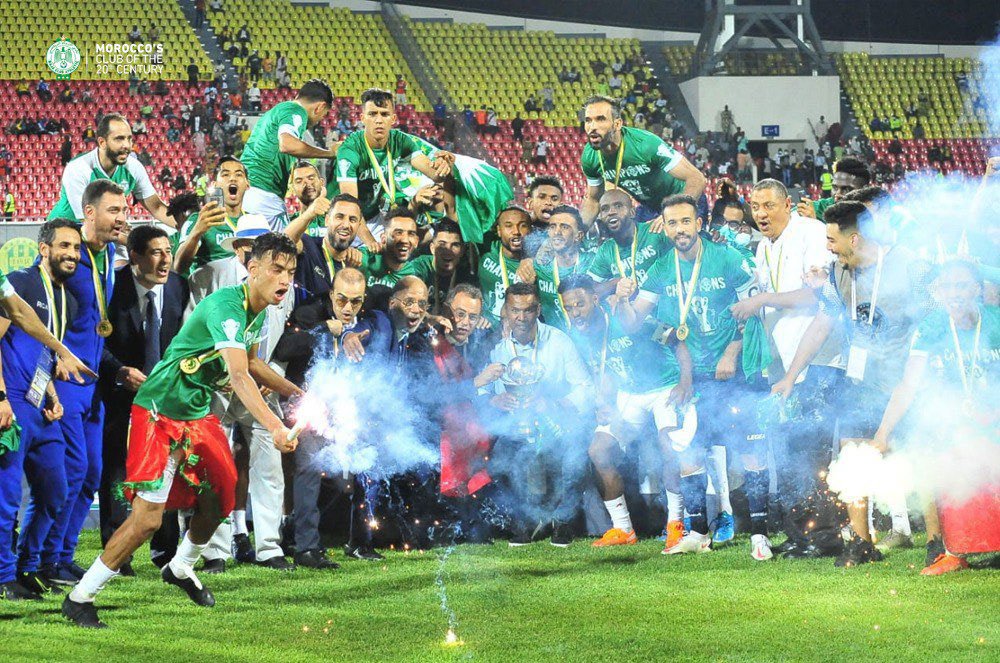 Raja Had to finish the match wIth 10 men after Omar Arjouane was shown a straight red card in the 62nd minute. However, the Moroccan side held on for the final 38 minutes to clinch the crown, their second after winning in 2018.

Soufiane Rahimi and Ben Malango scored for Raja within the first 13 minutes of the game to seal the game, with Kabilye halving the deficit at the start of the second half. However, they could not complete the comeback with Raja winning the crown.

Raja broke the deadlock in the fifth minute when Rahimi rounded off the keeper after picking up a brilliant pass from Arjouane. However, the goal was only given after a lengthy VAR conversation with the second assistant referee having initially flagged offside.

Raja were 2-0 up in the 13th minute when Malango swept home a left footed strike inside the box after he calmly controlled Oussama Soukhane’s cross from the left before tucking it into the bottom right corner.

Raja were controlling the tempo and bossing the chances. They came close again in the 33rd minute when Abdelilah Hafidi drove into the box from the left but his eventual shot went just inches over the bar.

But in the second half, the game would swing into Kabilye’s favour. Just seconds into the restart, The Canaries halved their deficit when Boulahia shot low into the net after the Raja defence struggled to clear a cross from the right.

Kabilye’s fight to get back into the game got a massive boost in the 62nd minute when Arjoune was sent off for a high boot, another decision that had to be confirmed by the VAR.

Kabilye piled the pressure on Raja who defended in numbers.

They kept the pressure and the Raja keeper had to make good saves and remain alert as Kabilye raided their back. It was Raja who could have added a third goal to seal the game in the 87th minute.

Off a counter, Rahimi dragged the keeper off his line before cutting back a cross for Fabrice Ngoma, but the substitute chipped the ball wide.