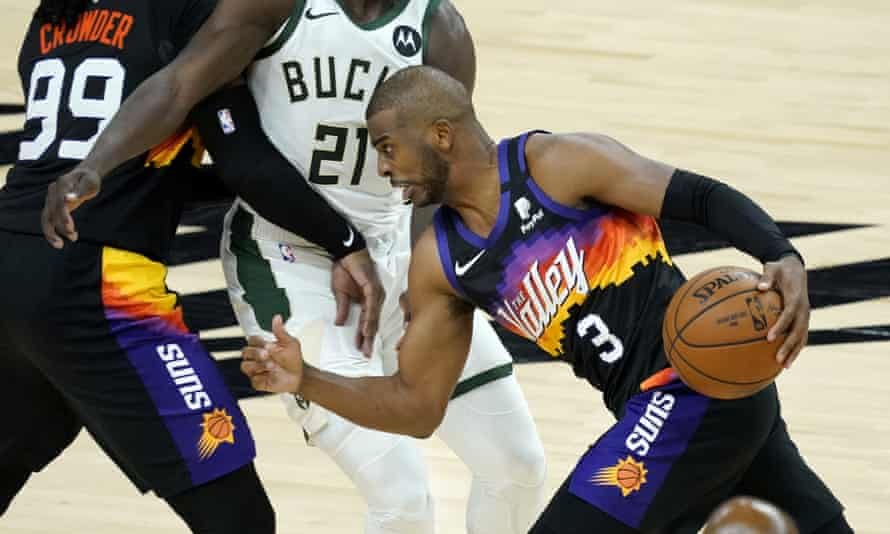 After 16 years of wait, Guard Chris Paul finally played in an NBA finals match, and well his debut performance was surely worth the wait.

Chris Paul scored 32 points and recorded nine assists as Devin Booker scored 27 points and the Suns beat the returning Giannis Antetokounmpo and his Milwaukee Bucks 118-105 on Tuesday night in Game 1 of the 2021 NBA Finals.

Paul scored 16 of his 32 points in a staggering third quarter in front of the Sun’s home supporters at Phoenix who had waited for 28 years to see their own team play in the NBA finals. 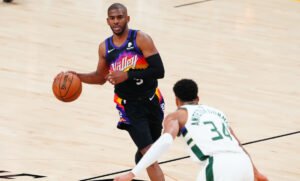 Chris Paul (left) made his first appearance in NBA Finals in his 16-year career.
PHOTO: Courtesy

“We’ve been building all season long for these moments,” Paul said. “We’re going to keep playing. This is just one game. We’ve got to stay locked in.”

Playing his first-ever finals the Point Guard has his Suns team in control at the early stage and are already the favorites to lift the NBA title for the first time in his career.

This is the third time only in Franchise history that the Phoenix Suns are playing in the NBA finals and Paul and his teammates are eager and passionate to make this one different from the other two finals.

Deandre Ayton added 22 points and 19 rebounds to continue his breakout stretch of play in his first postseason to ensure the Suns are out of reach of the ambitious Bucks. 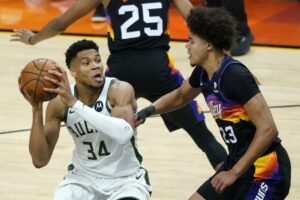 Bucks’ Giannis Antetokounmpo (with ball) scored 20 points and 17 rebounds in Game 1 of the NBA Finals after missing two games due to an injury.
PHOTO: Courtesy

Khris Middleton scored 29 points but it still was not enough for the Bucks to win their first match in an NBA Finals since 1974 and they are now forced to play from behind at home in game 2.

The Suns, who came into the NBA with the Bucks in 1968, made their only other finals appearance in 1976. They hadn’t even made the playoffs since 2010 and just two years ago were last in the Western Conference with a 19-63 record.

Both teams started well in a thrilling first half with the biggest lead being eight, with Mikal Bridges’ three-pointer making it 57-49 at the break.

But when the second half began in the third quarter, it was Chris Paul’s time to show why he is being listed as one of the best ever NBA players to not win the NBA titles by scoring a record 16 points in that quarter.

The Bucks fought back and restored the difference to seven near the midpoint of the fourth quarter before Paul helped the Suns restore a safe margin. He found Booker for a three-pointer, stole the ball from Middleton, and then hit a jumper to make it 106-94.

Game two will be played in Phoenix on Thursday night at Phoenix.