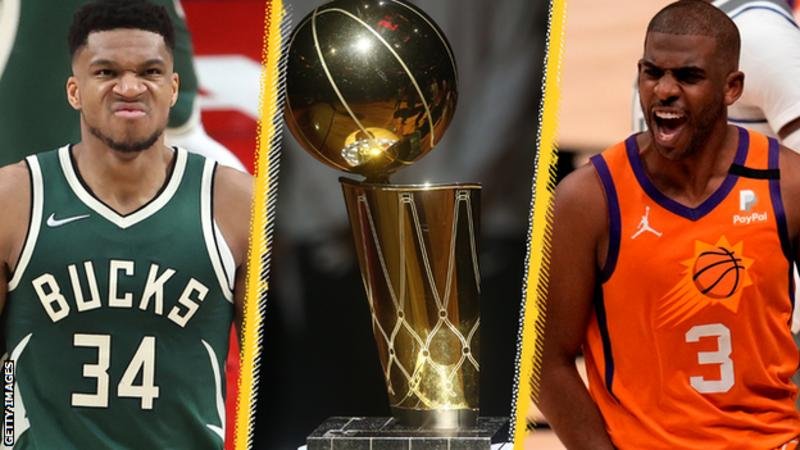 After a long, entertaining season and well so much wait, the NBA finals are finally here. Westerners the Phoenix Suns and Easterners Milwaukee Bucks are set to battle it out for the much-coveted trophy in the NBA finals in a best-of-seven series beginning tonight Tuesday 6 July 2021.

At the beginning of the regular season, many would have expected the likes of LeBron James, Kevin Durant, and Steve Curry to battle it out in the NBA finals but this year it is going to be young, and upcoming talents to set foot at the biggest stage of the NBA league.

This season’s NBA final is going to be a different final altogether as both teams contesting in the finals have all it takes to win the title and have both waited for a long time to play at this stage.

This year will mark the first time in the history of the NBA that the NBA finals are played in the month of July, which becomes the seventh month in which the finals have been played. Other months that have seen final games include March, April, May, June, September, and October.

Here is how each team fancied their way:

The suns may definitely not have been one of the favorites to play in the NBA finals when the season started in December but as the season progressed, they showed signs of progress.

They had an impressive end to the 2019-20 season, as a Devin Booker-inspired team won eight straight games in the NBA bubble, just missing out on the play-in tournament.

The off-season proved pivotal for The Suns who traded for All-Star point guard Chris Paul, who had led the Oklahoma City Thunder to the playoffs the season before. It was their biggest trade since acquiring Charles Barkley before the 1992-93 season, the last time the Suns reached the NBA Finals. History surely repeats itself and thanks to Chris Paul, the Suns have finally advanced to the NBA finals for the first time in 28 years.

Before this season, Paul’s 16-year career in the NBA has never seen him play in the NBA finals despite being named into the NBA All-Star team several times as one of the best players to grace the NBA league.

Chris picked up the biggest scoring half of his career in the Suns’ closeout semi-final game against the LA Clippers – 31 of his 41 points coming in the second half.

Another star the Suns have relied on in their long journey to the NBA Finals is youngster Devin Booker. The 24-year-old averaged 27 points per game in this year’s playoffs, stepping up when Paul missed out through Covid-19 isolation protocol. 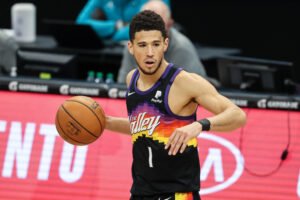 The Bucks have finally managed to advance to the NBA finals after so much struggle. They have been so close in the recent seasons finishing as the number one seed in the Eastern Conference for the last two seasons but Play-offs are where their tires get stuck.

The Bucks have finally engaged the four-wheel drive and driven past the Playoffs crushing the Atalanta Hawks in the Eastern Conference finals to advance to the NBA finals for the first time since 1974 and hoping to lift the trophy for the second time in their franchise history, with the only other time they won the NBA title being in 1971.

In this seasons’ playoffs, led by two-time MVP Giannis Antetokounmpo and his surrounding cast of All-Star Khris Middleton, Jrue Holiday, and PJ Tucker, the Bucks got the job done. 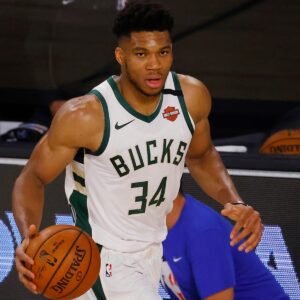 Their playoffs started with a 4-0 crushing of last season’s NBA finalists Miami Heat setting a semi-final tie with the star-studded Brooklyn Nets. Few expected the Bucks to go past the Nets but injuries to Nets stars Kyrie Irving and James Harden gave Bucks the upper hand eventually knocking out the Nets by a 4-3 series win.

They came up against the Atalanta Hawks in the Eastern Conference finals, with talisman Trae Young leading the opposition attack.

Again injuries were pivotal to this series, but this time the Bucks suffered as well.

A knee injury to Giannis Antetokounmpo in game four with the series tied at 2-2 could have led to another play-off heartbreak for Milwaukee.

The Bucks pulled all their sources and eventually managed back-to-back wins to win the Eastern Conference title.

This is promising to be a thrilling final series as both teams have done the unexpected to reach the NBA Finals.