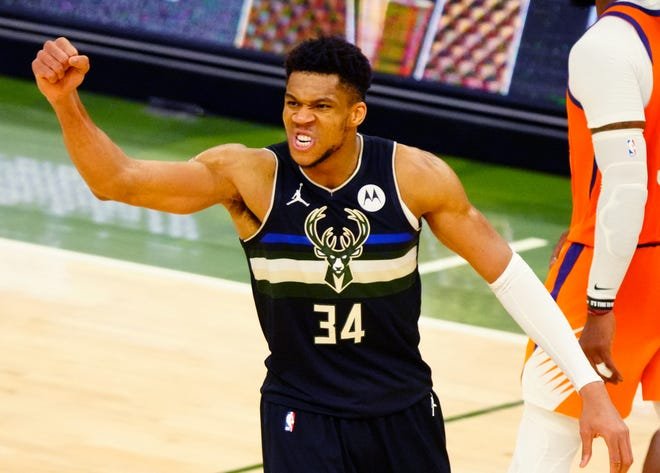 Milwaukee Bucks forward Giannis Antetokounmpo has been crowned the NBA finals Most Valuable Player (MVP) after leading the Bucks to their first-ever NBA title since 1971 in a thrilling six games series against the Phoenix Suns.

The 26-year-old Greek national became the youngest NBA Finals MVP since Kahwi Leonard did so in 2014 at the age of 22. Giannis is now the youngest Bucks player to be crowned NBA finals MVP in the history of the NBA. 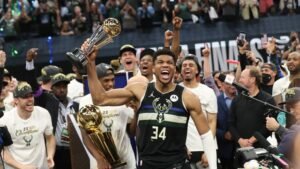 Before the finals started it was not even clear to the Bucks medic if Giannis would be able to play after sustaining an injury while playing in the Eastern Conference finals against the Atlanta Hawks.

Giannis however, made a comeback in game one of the NBA finals at Phoenix. He was not great in game one scoring only 20 points in a loss to the Phoenix. His form returned in games two and three played at Phoenix and at Milwaukee respectively when he scored back-to-back 40 points. In Game 4 and game 5, he gave the Bucks the most iconic performance by a Bucks player by leading the Bucks to a comeback in the series.

The Bucks were 2-0 down in game 2 of the series but were 3-2 up in game 5 of the 2021 NBA finals, thanks to the staggering performance by Giannis.

The most memorable play is in game 5 when Khris Middleton made a steal from Suns’ Devin Booker and made a pass to Giannis who dunked it home with seconds remaining to the end of the match to seal game 5 victory at Phoenix for the Bucks.

In the last quarter of game 4, the Bucks led the Suns 101-99 with 1:15 remaining Giannis jumped out to defend Devin Booker off a dribble handoff, so Booker threw a lob up pass to DeAndre Ayton that should have tied the game, but Giannis didn’t let it. He turned around and managed to block Ayton’s dunk attempt to preserve the lead and, eventually, the win for the Bucks that tied the series at 2-2. 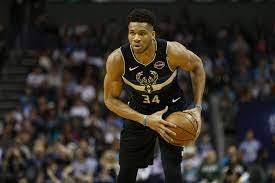 Giannis scored 50 points in game 6 of the 2021 NBA Finals against the Phoenix Suns.
PHOTO: Courtesy

In the entire six matches, Giannis, nicknamed the ‘Greek Freak’ averaged 35.2 points, 13.2 rebounds, and five assists per game. Game 6 was his best performance in the finals scoring a record of 50 points along with 14 rebounds and five blocks as the Bucks won the match 105-98 to clinch their first NBA title in 50 years.

Speaking after winning the NBA title, Giannis said, “I want to thank Milwaukee for believing in me, my teammates, man, they played hard every freaking game. I trusted this team. I wanted to do it here in this city. I wanted to do it with these guys, so I’m happy. I’m happy we were able to get it done.”

He also went on to thank one of his longest teammate and one who has also enjoyed a brilliant NBA final, Khris Middleton, saying, ”Khris, we did it, man, I’m happy, I’m happy, man. This guy doesn’t really know how hard he pushed me. He pushed me every day to be great. He pushes me every day to be a great man. I’m happy I can step on the floor with this guy and play every single minute with this guy, and the rest of the guys, but Khris especially.”