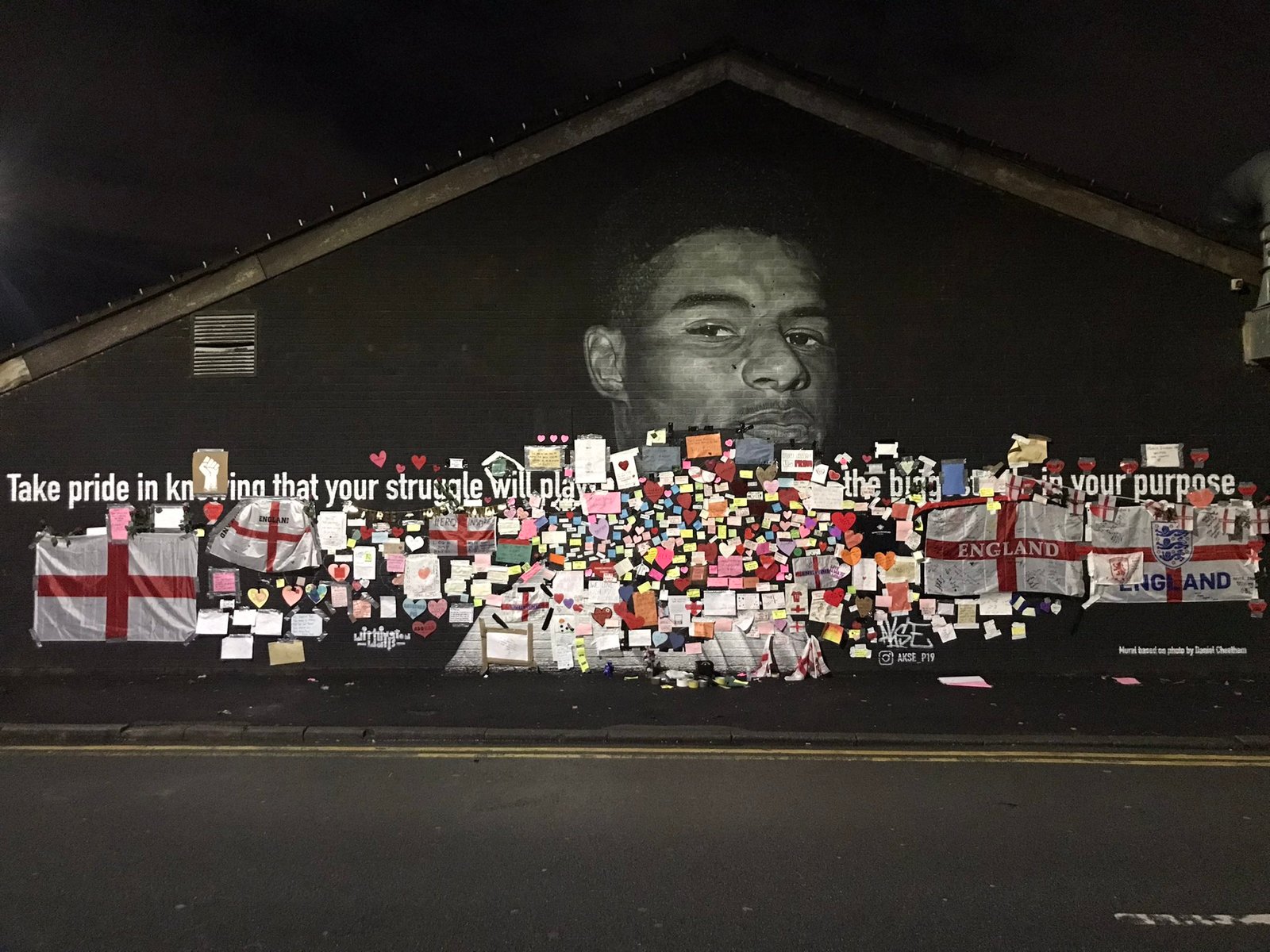 Marcus Rashford was among the Three Lions players that were meted with torrent racial abuse, after England was defeated by Italy in Wembley during the Euro 2020 finals, This day will ever remain in the minds of this England youngsters, it was a night that England was getting into the final after 55 years when Three Lions Coach Gareth Southgate missed the decisive penalty then, this time around they were looking to bring it home but certainly it went to Rome.

In the midst of many activities and debates in sporting world, it wasn’t only that which transpired on that fateful night, Marcus Rashfords mural near his childhood home in Manchester was vandalized.

Trying to make sense of what football and this current crop of players mean to English society is like standing in the Centre of a hall of mirrors. Everything is distorted and reflected at odd angles. The images shift depending on your vantage point. Stay too long and you’re likely going to feel a little dizzy.

If anything, Gareth Southgate’s team has exposed an underlying hypocrisy in English culture. More than one social commentator pointed out that had Rashford, Sancho and Saka – aged 23, 21 and 19 respectively slotted home their penalties, they would have been heralded as heroes by the same people who called them monkeys and posted emojis of bananas on their Instagram feeds sa reality.

Even if they had won, it was always too much to expect this young group to unite the country. Sporting glories are hollow and fleeting. They offer the sense of social change but rarely prove to be a catalyst for meaningful recalibration. Had England’s brave lions triumphed under the Wembley arch, they would have simply applied a veneer of harmony over a disharmonious ecosystem one ripped apart by years of austerity, Britain’s shrinking status in global affairs, Brexit and a raging culture war.

But that’s all politics. What this team has done is cut through the unpalatable noise to engage with fans as people, not as potential voters or consumers of a product. Midfielder Jordan Henderson has been a vocal ally of the LGBTQIA+ community, wearing rainbow laces and declaring publicly that the beautiful game is for everyone, no matter who they love. The Liverpool skipper also led a consortium of Premier League captains to speak out against the proposed European Super League that would have gutted club football on the continent. 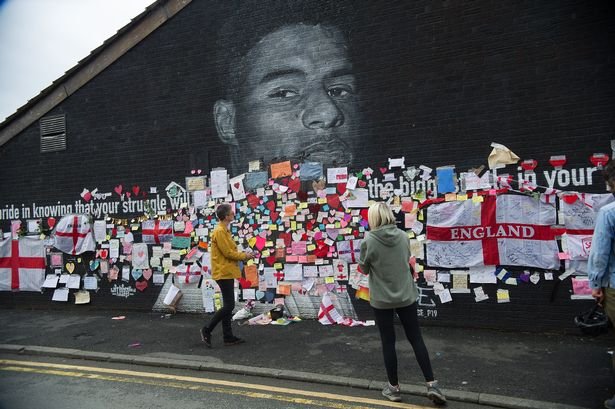 Then there is Rashford. A young man barely out of boyhood who has transcended the confines of his sport like few athletes in history. By drawing on his own experience with hunger, he led a campaign last July that forced a government U-turn to ensure hungry children received free school meals. He used his platform to legitimately change the world around him, not through magical moments with a ball at his feet but through a concerted declaration that no child in this wealthy nation should go to sleep with an empty stomach.

That he did so indicates a broader malaise. The United Kingdom is the sixth-richest country on Earth and yet more than 2.5 million people relied on food banks this past year. It is not for Rashford to point out that this is inherently wrong, that this is patently a sign of a brittle social order. It is for the country’s leaders to address this imbalance. Failing to do so is the result of either a lack of will or ability. If this ruling Conservative Party was held to the same standards as a football club, its leaders would have got the sack long ago.

From his refusal to acknowledge the severity of the coronavirus pandemic to his bloviating rants about British exceptionalism, Prime Minister Boris Johnson has stood in almost direct contrast to the ideals of this football team. Not that it has stopped him from hitching a ride on the bandwagon, arranging staged photos where he cheers awkwardly at a television while wearing the team’s white kit.

In the wake of the racist abuse levelled at the three young Black players, Johnson issued a scathing rebuke, instructing those responsible to “crawl back under the rock from which [they had] emerged”. This is the same Johnson who once described Africans as “flag-waving piccaninnies” with “watermelon smiles” and likened Muslim women in burkas to “letterboxes”.

Johnson’s Home Secretary Priti Patel, whose tough anti-immigration and detention policies have made her a powerful and terrifying force in Whitehall, also criticized the racist posts on social media, saying that she was “disgusted” by them. However, Patel was an outspoken critic of the Black Lives Matter protests. She said that the decision by England’s footballers to kneel prior to kickoff was “dreadful” and that fans had the right to boo them.

England defender Tyrone Mings on the other hand did not condone his behavioral tweet he blasted Patels hypocrisy: “You don’t get to stoke the fire at the beginning of the tournament by labelling our anti-discrimination message as ‘gesture politics’ and then pretend to be disgusted when the very thing we’re campaigning against, happens.”

Southgate and captain Harry Kane have ignored the accusations that their anti-racist stance is somehow a Marxist stunt as if these millionaire footballers were socialist revolutionaries and have risked alienating a portion of their own fanbase to shine a light on the most toxic aspects of their society.

The good and bad of England

A brief word on England’s fans. If this team of likeable individuals pulling in a single direction represents the best of this country, then a large group of its supposed supporters unquestionably represents its worst aspects. For decades travelling fans have occupied town squares and high streets in some of Europe’s most famous and beautiful cities. From Prague to Nice, Amsterdam to Porto, pink-skinned hyper-boozed hooligans trashing restaurants and cafes while chanting xenophobic songs have become indelibly linked with England’s teams abroad. 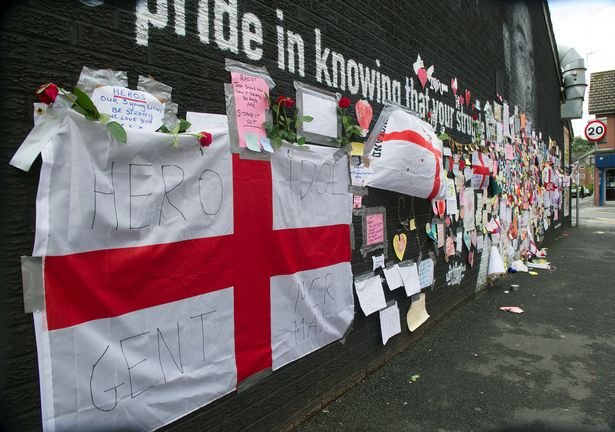 This time, English hooliganism turned on England. On the day of the final, the areas around Wembley resembled a war zone. Social media was awash with videos of “lads” snorting cocaine, hurling bottles through the air and attacking security guards. Multiple fans stormed the gates of the stadium, forcing their way in. It is too simplistic to say that these hooligans typify English football fandom, but then it would be amiss to dismiss them as a small minority. This is England, at least a sizeable portion of it.

But if they are England, then so too is this football team and those who stand behind their calls for change. Everything that is good about this former colonizer- creativity, inclusion, talent, hope – is embodied within it.

If there was any doubt, consider that the inflammatory graffiti scrawled over Rashford’s mural was hastily covered up. Not long after some anonymous coward desecrated a monument to a hero who fed hungry children, the people of Manchester showed that love will always beat hate.

Hundreds of messages of support were soon plastered on the wall. Images of hearts and raised fists, as well as poems and simple phrases expressing gratitude took the place of ugly abuse.

What does this football team mean to England? It is England, in all its glory and shame. They may not have ended their drought of a major tournament win for 55 years, but they shifted the discourse on how a nation speaks about sport and its place in society. Some might say this is more important than silverware.