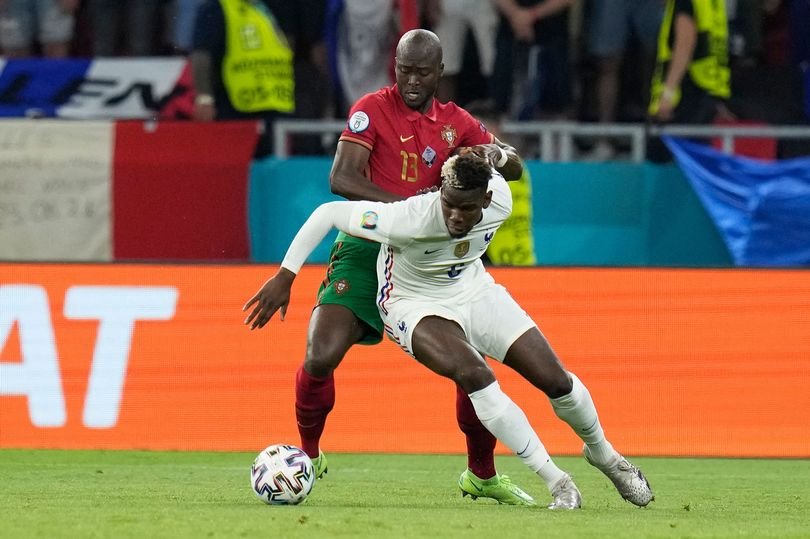 Paul Labile Pogba has been the talk of the town ever since the EURO 2020 took off, The France Midfielder has proved himself as the best midfielder in the world in the international duties after coming from a lot of criticism about his performance at the Club level.

It is no-brainer that to everyone who has kept a close eye to the French matches and generally Euro 2020 will pick Pogba as the best Midfielder, well It’s not that Paul Pogba is bad for Manchester United, he’s just ridiculously good for France.

Having watched him these last five years in a Red Devils shirt, you probably wouldn’t value him at £89million the most expensive player in Premier League history. But a watch of him for his country at Euro 2020 and you’d say the Frenchman is worth double the amount. 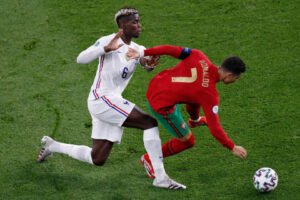 Despite all the talk about Cristiano Ronaldo and Karim Benzema, who netted both goals for their sides, Pogba was the best player on the pitch during the 2-2 draw with Portugal last Wednesday in their group stage knockout.

Paul Pogba delivered yet another midfield masterclass and could be on course to win Player of the Tournament at this rate.

It was his perfectly-timed, defense-splitting pass that allowed Benzema to put France ahead, and Kylian Mbappe ought to have scored from a similarly brilliant ball earlier in the match.

Of course, it was the United midfielder’s outside-of-the-foot pass that created the only goal in France’s victory over Germany, and his general play has been a joy to watch.

Pogba so nearly got the beautiful goal his display against Portgual would’ve deserved, evading his marker with a classy piece of skill on the edge of the box before a stunning, curling effort which was somehow kept out by Rui Patricio.

Man United fans will be left questioning why the Frenchman seems to perform at a different level for his country – the answer is probably N’Golo Kante next to him. 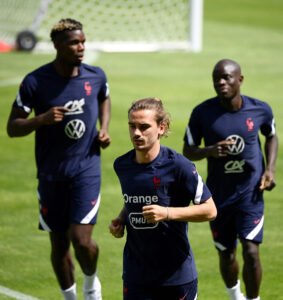 The Chelsea midfielder is on course for personal accolades of his own after inspiring the Blues to Champions League glory, and it would be difficult to look past him for the Ballon d’Or if France wins the Euros.

With Kante alongside him, Pogba carries a significantly lighter load in midfield, allowing him to express himself and demonstrate his full creative potential.

Incredibly, Les Blues have never lost when Pogba and Kante start together, in a run stretching 30 matches.

Playing in a pivot role for France, operating alongside N’Golo Kante, Pogba has thrived with the freedom and space afforded to him by his opponents.

For the exception of Hungary’s resilient low-block defense, the midfielder has been able to spring passes from left to right and dictate the game from the heart of the midfield during the group stages.

The midfielder completed 97% of his passes against Portugal according to Wyscout , including five long passes in France’s final group-stage game of the tournament.

And that run doesn’t look to be ending any time soon, if Les Bleus back up their ‘favourites’ tag by lifting the European Championship title at Wembley on July 11.

At United, Pogba has to play further up the field in order to get the best out of him and find the space where he can play his game. However, that also blunts one of his best traits – those sumptuous long passes forward – which are making his game unstoppable in this tournament.

Without a Kante beside him, United’s lack of top quality holding midfielders have also prohibited Pogba properly really kicking on in a dominant manner, forcing him to play in a more conservative manner.

If United do not rectify this in the summer, Pogba will likely continue in the same stop-start form he has endured in his career at Old Trafford so far.