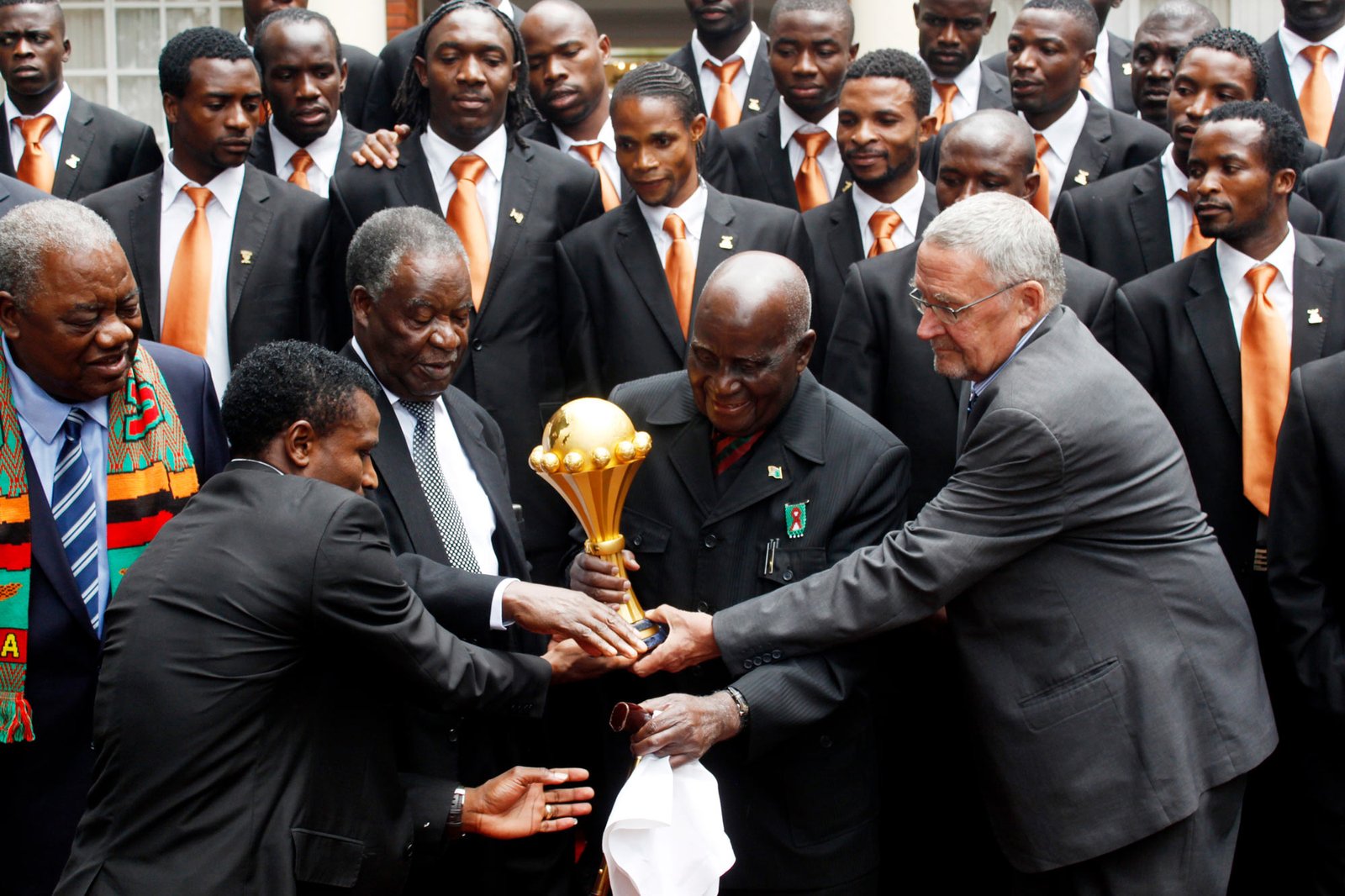 Share
Tweet
Share
Share
Email
Comments
Football is the most popular sport in Zambia, it runs through the veins of Zambian society and, for many years, football has provided relief to a population battered by economic crisis, reduced freedoms and a permanent state of emergency.
The late Kenneth Kaunda, Zambia’s first president will not only be remembered as one of the last of the generation of African leaders who fought colonialism but also for his love of sport.

Kenneth Kaunda ruled Zambia for 27 years assuming the role of presidency in 1964 just like any other head of state he had his transformative agenda of the South African nation.  This was the time he envisioned of the brighter Zambia, in which he ought to build institutions that would propel the country forward and make all Zambians flourish in the glow of independence.

He enjoyed ten years of good governance coupled with developments but the 17 years that followed, however, would see the economy plunge. As the Organization of the Petroleum Exporting Countries oil crisis brought commodities crashing down, effectively stalling an economy heavily reliant on copper sale, the state-controlled economic model turned once-private industries into loss-making entities that depleted reserves, leaving Zambia in a debt spiral that would prove irrecoverable.

History of Game in Zambia

Football ever provided heightened emotions that would momentarily give hope for a better future, concerns about daily tribulations and make a wary populace feel better, mind you it was the only tool that could bring people together and unify the nation.

The game found fertile grounds in the mining communities of the Copperbelt, the mineral-rich area that generated 90% of Zambia’s foreign exchange earnings and quickly spreading all across the country.

It was introduced in Zambia in the 1930s with an aim of keeping thousands of young men flocking to the mines out of trouble and to entertain them, reducing ugly fisticuffs and other violence among the huge population of migrated mine workers. It worked wonderfully, thus setting the stage for the replication of this model on a national scale.

When Zambia won her independence on 24 October 1964, it was no surprise that a football match was part of the festivities. Kaunda invited his friend and mentor the president of Ghana  Kwame Nkrumah’s team, to play in the first match at the newly built Independence Stadium as he affirmed his pan-African commitments, alongside the father of the movement in Africa.

Initially, Zambia needed to play catch-up to the teams that won their independence in the first waves of seismic change in the north and west of the continent. Ghana, Egypt and Ethiopia played in the first Africa Cup of Nations (AfCON) in 1957 where South Africa, initially slated to take part, was withdrawn because of the racist laws in the country. The football development plan involved an influx of English coaches and tours of Zambia by English football sides. Ex-English professional players, among them the legendary Jackie Sewell, even came to ply their trade in the Zambian league. 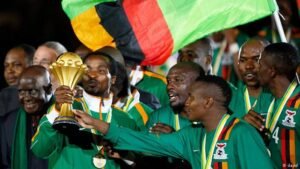 In the early 1970s, Kaunda’s investment in sport began to pay off. At first attempt, a young Zambian team made up of players who had recently graduated from school football into league clubs reached the final of the 1974 Afcon. There, they drew 2-2 against Zaire (now known as the Democratic Republic of Congo). As penalty shoot-outs were not yet introduced, the final went to a replay which Zambia lost 2-0, the first and only time the AFCON would be decided this way. It was a significant achievement in the eyes of the president as it elevated him and the country’s status among his peers.

After the worldwide economic crash of 1973, football began to play an increasing role in the government’s plans. It was the era when socialist countries used sport as a vehicle for showcasing their superiority over the West. African leaders increasingly adopted this model. It was not uncommon for Kaunda and his first cabinet to take part in exhibition matches that thrilled the masses. He also played the role of referee in other matches.

Kaunda and the national team

Kenneth Kaunda enthusiasm with the national team would never go unnoticed at any point in time, When the Zambia national team took to the pitch as it began to climb up the ladder of success, Kaunda thrilled the crowds and motivated the team, setting the scene alight with a foray down to the pitch from the VIP stand. He danced and cheered even as he showed his ball juggling skills which sent fans into rapturous excitement.

This helped him in most instances to be identified with the success of the team. Zambia qualified for the 1976 Olympic Games in Montreal but a boycott by African nations meant that the team would be unable to showcase their skills on a global scale. African countries had wanted the International Olympic Committee to kick out New Zealand, whose All Blacks had toured South Africa, where the killing of striking students in Soweto was international news. 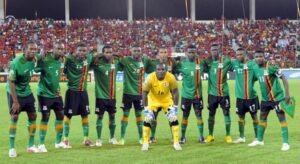 In 1980, Zambia again qualified for the Games in Moscow. Two years later in Libya, Zambia came third at the AFCON that was won by Ghana. The high-profile home matches to qualify for these tournaments, and the participation in pan-African and global events, gave Kaunda and his government the emotional link to the hearts of the people. It’s a link they needed to drive their political and economic agendas.

The media fell behind the national sports drive. The famous African football commentator Dennis Liwewe used the power of oration to extol Kaunda’s role in paving the way for the team’s success. The phrase, “His Excellency the President and his government”, was constantly woven into the fabric of his commentary when Zambia was successful.

While Kaunda realized the value of the team for his nation-building agenda, he genuinely loved football. He missed no opportunity to mingle with the players, taking time out of his tight schedule to host them for lavish lunches at State House. There, he personally served them, giving the players a sense of patriotism and pride in wearing the national jersey. To date, former players speak with fond memories of those occasions and the steely-eyed conversations that geared them up for battle on the football field.

Kaunda pinned national honours on the chests of successful sportsmen and sportswomen on grand occasions, with Heroes, Unity and Independence Days much treasured. His much-valued lunches were not only restricted to footballers. Athletes who came back from the Commonwealth and Olympic Games with medals were equally recognised and feted for their achievements.

Ironically, for a man who loved the game so much, it would be a football match that would break the aura of invincibility around him. When Zambia played against Madagascar in June 1991, four months before the general elections, there was a wholly unexpected turn of events that forever changed the political landscape.

The presidential convoy, driving into the Independence Stadium, once the scene of fervent patriotic waving and cheering, was met by stone-cold silence, followed by a barrage of discarded fruit skins and other trash as it drove around the stadium running track. In an instant, the suppressed emotions of a tired population bubbled over. The national mood had changed irreversibly. An era was over.

Such was the animosity shown to Kaunda by the new government that he would not be seen at a domestic football match again after his loss in the 1991 election. There would however be a final twist in the tale. Losing the election with 19% of the vote was Kaunda’s low point. Yet, shortly after, following a neo-liberal term, the decimation of the economy, a torturous process of privatization, and allegations of graft against Chiluba, Kaunda’s role in the struggle and his building of institutions and infrastructure would be belatedly appreciated. He regained his standing in society and his place as an elder statesman was cemented. 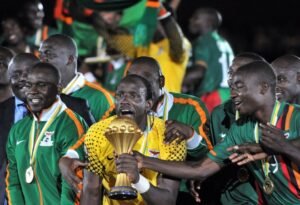 When Zambia reached the final of the 2012 AFCON, defeating the favorites Ivory Coast in Gabon where Chipolopolo had lost its finest generation of footballers in a plane crash in 1993, Kaunda was a guest of the then president, Michael Sata, who did much during his term to return Kaunda to iconic status. As Zambian captain Christopher Katongo lifted the trophy, and later presented it to his first president, it brought back recollections of a bygone era and further rekindled the memories of the fairytale years of Kenneth Kaunda and Zambia’s greatest football era.

Today with Zambian football foundering, the older fans look back with nostalgia to an era when football grounds overflowed, when Zambia could hold its own against the continents best, and Kenneth Kaunda’s pre-kick off routine set the stage for a team that for the most part, hardly lost at home.