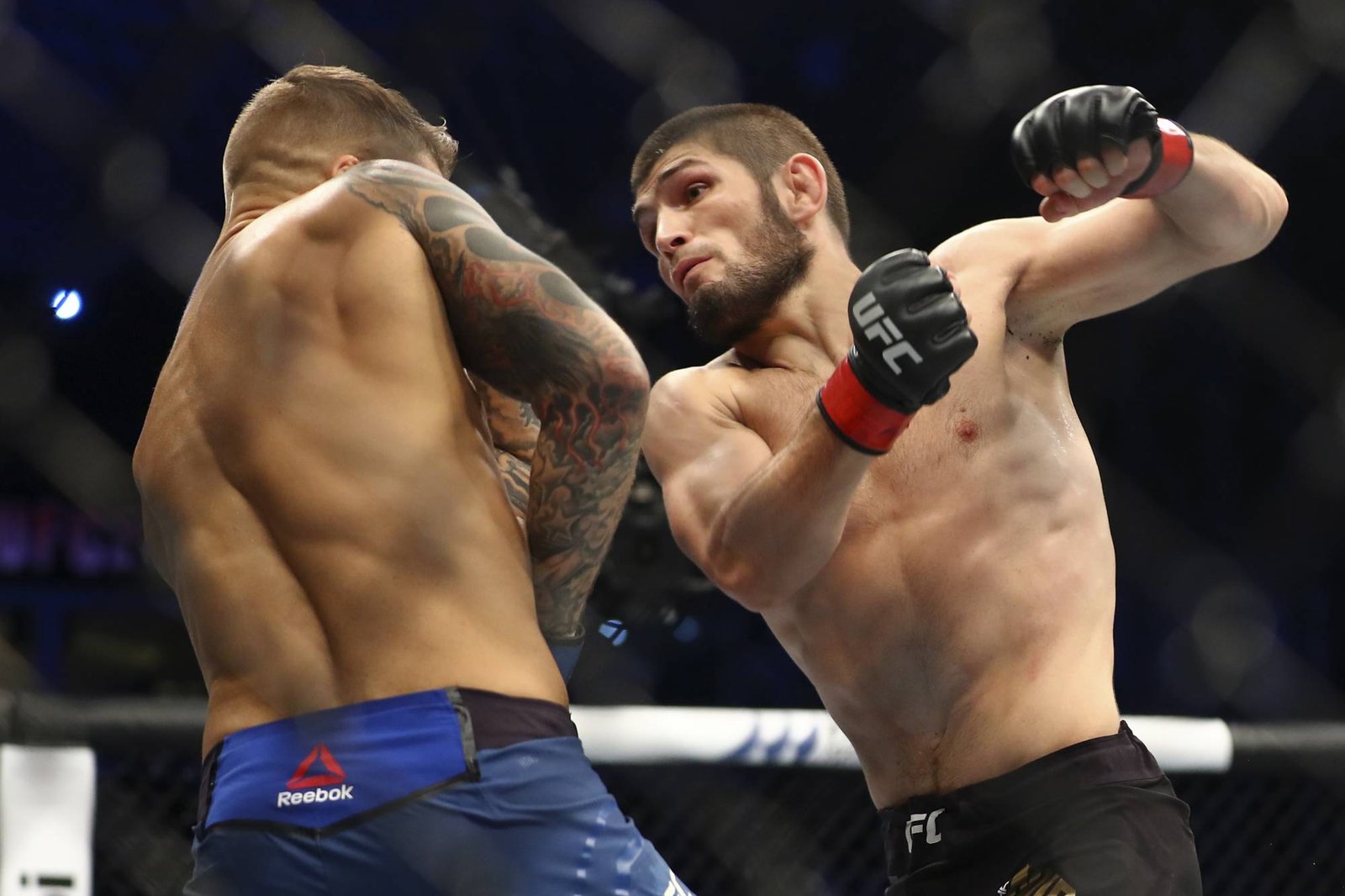 Khabib Abdulmanapovich Nurmagomedov is the most dominant champion in the Ultimate Fighting Championship (UFC) history, having a record 29 wins and zero loses under his belt. Khabib has extended his winning streak over high-profile fighters such as Conor McGregor, Dustin Poirier, and Rafael dos Anjos.  As of 2021, a number of sources proclaimed the Russian mixed martial arts promoter and retired professional mixed martial artist was UFC’s top-ranked pound-for-pound fighter.

Khabib made his first UFC appearance against  Iranian professional mixed martial artist Kamal Shalorus. Khabib had recorded 16 victories outside UFC before his debut in the tournament. He went on to record impressive records and stats outside the fighting arena. Khabib’s victories stretch to triumph over Gleison Tibau, Edson Barboza, Michael Johnson, and Thiago Tavares.

Due to his success and rise to fame, Khabib is one of the most famous Russians in the glow with over 24 million followers on Instagram.

Khabib ‘The Eagle” Nurmagomedov clinched his first lightweight title after defeating Al Iaquinta at UFC 223. He has beaten both Conor McGregor and  Dustin Poirier, former lightweight champion respectively to defend his title. Khabib’s fight against Irish mixed martial artist Conor Mcgregor is the biggest in UFC history, with over 2.4 million buys according to PPV numbers, with an attendance of 20,034 fans – the highest ever in the state of Nevada. Khabib’s records state that he is undoubtedly the best lightweight fighter in UFC.

Khabib has bagged a host of achievements besides winning the UFC lightweight championship and even successfully defending the title over competitive opponents. He has won a number of titles outside cage fighting including two-time combat Sambo World Champion and also clinched two titles in Russian Combat Sambo.

Khabib Nurmagomedov: Net Worth and Salary 2021

Khabib’s showdown and triumph over 32-year-old McGregor elevated his financial status. He scooped over $1.5 million after defeating the former Ultimate Fighting Championship featherweight champion. Khabib ‘The Eagle’ second title defence match over 32-year-old Dustin Poirier earned him a mega $6 million prize money. The Sports Daily record that longest-reigning UFC Lightweight Champion Khabib has made over $14.7 million in just 13 UFC fights. Celebrity Net Worth estimates Khabib’s net worth to be in the region of $40 million, almost $8 million less than McGregor.

Russian athlete Khabib has a number of stylish cars he has used courtesy of the astronomical amount of money he has made in his career. Khabib owns a black Lada Priora which is actually the first car he ever bought. However, it was an investment as he sold it off a few months later to fund his fighting career.

After selling his first car to further his career, Khabib bought a  Mercedes Benz W124 300E. He has been spotted in a Ferrari California and a couple of BMW 6 series. Khabib also owns a Mercedes-AMG GT thas possesses a V8 twin-turbocharged engine, gifted to him by a Russian billionaire businessman. Khabib also has  Toyota Land Cruiser J200, to add an SUV vibe in his garage.

Forbes Russian ranked Khabib Nurmagomedov as the topmost successful Russian athlete in June 2020. A year before, Khabib was a brand ambassador of SalamPay, a financial service company. His co-operation does not end there as companies like Gorilla Energy, Reebok, and Toyota sponsor him.

As a high-profile athlete, Khabib charges $300k per day for special appearances and speaking in engagements, according to his manager.

Following his majestic victory over McGregor, Khabib set off to Uganda. His purpose was to fix wells to provide safe and clean water for drinking. In 208, he headed to the West of Africa in Nigeria to repair water wells and build new medical centers.

Khabib announced his retirement from UFC in October 2020 after his fight with Justin Gaethje ending his career on a high. Many fans wished he would conclude his professional career with one more match to hit 30-0-0 but his decision was final as he looked to venture into other areas of interest.

Following the death of his father, Abdulmanap Nurmagomedov, who also coached Khabib, his mother did not want his son competing anymore and he honoured his mother’s request.