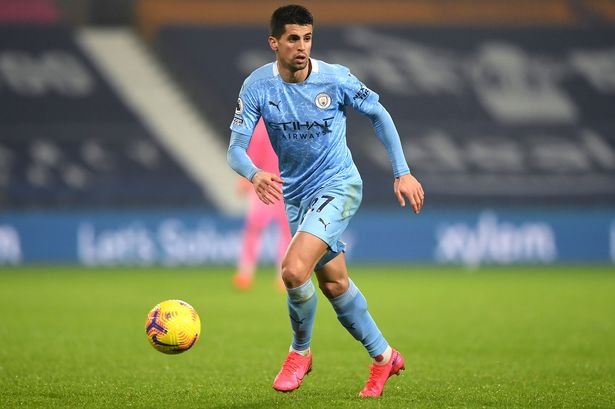 The Portuguese who mostly spent his time at the centre of the midfield and still managing to lock down the left wing at the same time creating goals with his right-foot awe many football fans.

For some time now Joao Cancelo has been playing exceptionally well in whatever side of City’s defense he is on. He is so flexible and dynamic interpretation of his role.

The Portuguese and city defender is not only defending opponents from scoring but also spraying the ball across the field, playmaking and assisting in game build-up.

Although Belgian International midfielder Kevin De Bruyne is the city’s creator-in-chief where Riyad Mahrez has been performing well after given opportunity, Cancelo remains the only person in pep Guardiola’s squad creating more chances at the moment.

Cancelo has four assists in all competition with two in the premier league.

The most recent of those assists, though, was the inch-perfect cross for Bernardo Silva’s breakthrough in this Champions League last-16 match against Borussia Monchengladbach on Wednesday night.

Another step inside and exquisite right-footed cross in the second half once again dropped onto Bernardo’s head. Gabriel Jesus converted for a second away goal that should all but settle the tie.

“The quality where he plays there and especially when he drives with the ball and passes the halfway line and can drive to the central defenders, he is a player with a huge quality.”

Pep also did not all through praise the defender but also politely criticized Cancelo on areas of improvement.

“He has to discriminate,” Guardiola said. “Sometimes he always wants to do these kinds of passes and these passes. Of course, when he has that feeling to put the ball you have to have the quality to put that ball, and he did it perfectly.”

Out of possession too, Guardiola can see room for improvement. “Sometimes in that position, you have to control the risk,” he noted.

It used to be said that the holding midfield role in Guardiola’s sides was the most demanding. Whatever we’re calling Cancelo’s role, it may be a new contender.

It requires playmaking ability, positional awareness, tactical intelligence and the physical capacity to cover huge areas of the pitch. Very few players in world football could fulfil such a job specification. Yet City appears to have found one in Cancelo.