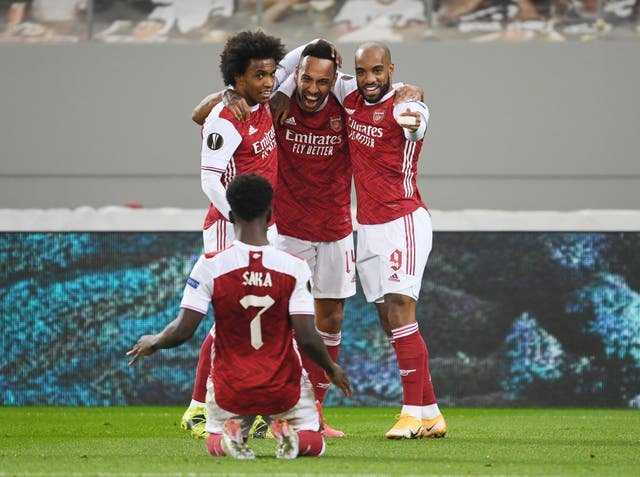 Pierre-Emerick Aubameyang scored twice as Arsenal overcame Benfica 3 2 to proceed to the next round of the Europa League.

The match that was relocated to Athens, Greece saw the Gunners secure a place in the last-16 of the Europea tournament in sublime fashion.

Premier League side Arsenal were trailing 2 1 through the second-half at home to the visiting Portuguese side and needed two goals to proceed on away goal rule.

Former Celtic fullback Kieran Tierney fired a left-footed finish to equalize for the Gunners to give the FA Cup winners a lifeline.

England international Bukayo Saka then found Gunners skipper Aubameyang in the area with a pinpoint cross with the captain showcasing his prowess by netting his second of the game.

Arsenal manager Mikel Arteta had made only one customary change to the squad that faced Liga NOS side Benfica in Rome in their first-leg.

The Spaniard brought in Scottish international Tierney to replace Cedric Soares at the left-back position.

23-year-old Tierney has proved to be a reliable left-back for the former Manchester City assistant coach and even one of the finest in the domestic league.

The Gunners had a similar first-half in which they enjoyed the lion’s share of possession and controlling the game confidently.

Gabon international Aubameyang was the key man for Arsenal as he broke the deadlock after a clever reverse pass from Saka.

Their persistence paid off with Diogo Goncalves curled a superb free-kick into the top corner to give the visitors an equaliser.

Rafa Silva went on to give Benfica the lead as he rounded Arsenal goalkeeper Bernd Leno following a mistake by Dani Ceballos at the hour mark.

Substitute Willian made a mark after his coming on finding Tierney in the box who slotted home from close range to far corner.

The game remained tight with both teams finding chances but little to make them fruitful.

However, it was former Borussia Dortmund striker Aubameyang who rose to the occasion as he headed from close range to send Arsenal into the next round of the tournament.