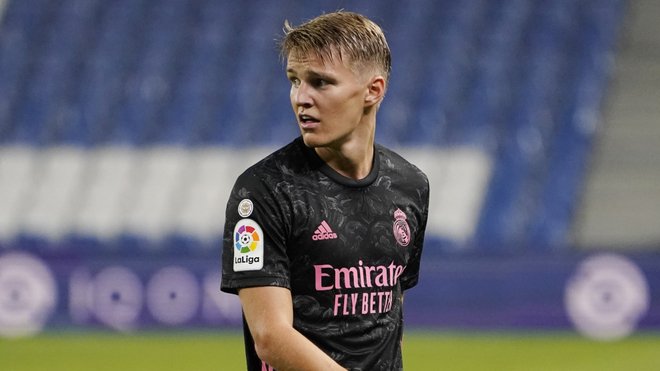 The Los Blancos player is deemed a potential long-term replacement to Mesut Ozil who parted ways with the Gunners.

Ozil, a former Real Madrid player has been out of favour with manager Mikel Arteta and fallen the pecking order in the squad.

The German international left for Turkish club Fenerbahçe S.K. in the past week during the January transfer window.

Odegaard is unhappy with his game time at Real Madrid and has handed a transfer request away from Santiago Bernabeu.

However, the request is only a loan move and not a permanent switch from the La Liga giants.

Real Sociedad are said to welcome the Norway international back to the club where he has been influential.

In the 2019/20 La Liga campaign, the Norwegian scored four goals and registered six assists in 31 matches for the La Real.

Nevertheless, a shocking move to England could be on the table.

So far, coach Arteta has Emile Smith Rowe as a suitable replacement to the vacuum left by 32-year-old Ozil.

The arrival of 22-year-old Odegaard would offer competition though for the 20-year-old attacking midfielder in the starting eleven.

Another star who has been linked with the Gunners is Paris-Saint Germain (PSG) attacking midfielder Julian Draxler whose contract is expiring at the end of the season.

Odegaard is a gifted player with loads of potential and would fit in Arteta’s style of play. As the former Gunner player is passionate about young players, Odegaard would flourish under the Spaniard tactician.

The former Stromsgodset prodigy is also a versatile midfielder who can play at the centre of the park, making him an alternative to Dani Ceballos.

As a young player, Odegaard may not demand first-team player action, giving Arteta, former Manchester City assistant time to nurture him in his tactical setup.

At Real Madrid, Odegaard has garnered just over 200 minutes of play under Frenchman Zinedine Zidane but under Arteta, just like Ceballos, he would have much game time under his belt.

Arenal are tenth in the Premier League table after 19 games with 27 points, with four wins and one draw in their last five games.