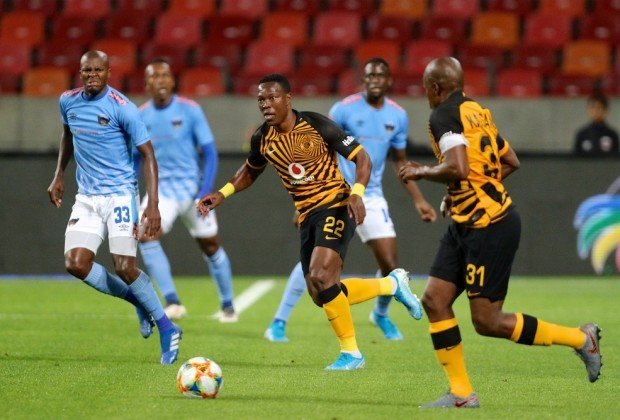 Kaizer Chiefs produced a timely result in their SA Premiership title quest with a 1-0 victory over Chippa United at Orlando Stadium on Wednesday.

The result means Chiefs continue to lead the log on goal difference ahead of Mamelodi Sundowns (who defeated Polokwane City in a simultaneous match) and need only match their rivals’ result on the final day of the season to clinch a first Premiership title since 2015.

The Soweto giants started strongly and claimed the lead in the ninth minute, with Samir Nurkovic flicking on a cross from the right flank to allow Khama Billiat to finish from close range and pick up just his second league goal this season.

Chippa threatened an equaliser just after the quarter-hour mark, as Ruzaigh Gamildien got away a deflected shot from the edge of the penalty area, but Khune was able to make a relatively comfortable save.

The veteran ‘keeper made a less convincing save in the 37th minute when he punched a free-kick from Gamildien straight back into the danger area, but fortunately for Chiefs, no Chippa player was on hand to capitalise.

Both teams spurned great chances in injury time before the break, with Billiat firing over from a tight angle, while Chippa almost equalised when Khune was caught off his line by Gamildien, but Daniel Cardoso was perfectly placed to make a goal-line clearance.

The Chilli Boys, a goal down at the interval, made an attacking change at the start of the second half when they brought Nigerian striker Augustine Kwem off the bench. They certainly improved in attack and built up some pressure, but midway through the second half, they were reduced to 10 men.

Tercious Malepe was given his marching orders for cynically hacking down Billiat on a counter-attack, with the referee of the opinion that the Chippa man had denied a clear goal-scoring opportunity.

The red card could have taken all impetus out of Chippa’s comeback hopes, but they continued to fight against the odds and were unlucky to have an equalising header from substitute Boikanyo Komane ruled out for a phantom foul on Khune.

The Chilli Boys went down to nine players in the 88th minute when substitute Elvis Moyo was dismissed for a studs-up challenge on Ramahlwe Mphahlele, ending any hopes of a thrilling finale to the match.

The teams will wrap up their league season on Saturday: Chippa will host Golden Arrows at Orlando Stadium, while Chiefs will visit Baroka FC at Bidvest Stadium.