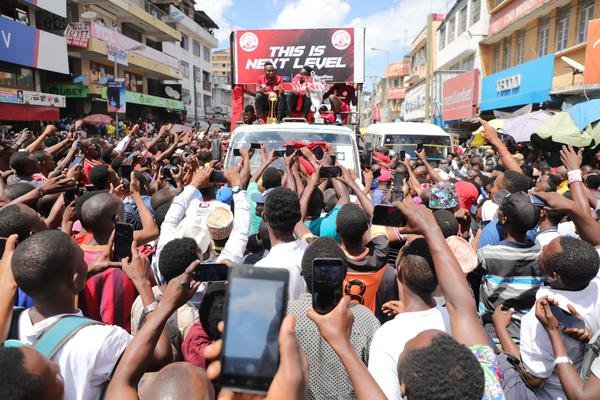 Mozambican-import Luis Miquissone and skipper John Raphael Bocco combined twice to give Simba the edge over Namungo, adding a third trophy to their 2019/2020 cabinet.

Aboard an open bus, Simba paraded their trophy all the way from the Julius Nyerere International Airport through the streets of Dar, to their iconic Kariakoo home with elated fans lining the streets to celebrate the victory.

Simba who started the campaign with victory in the Community Shield clinched the league title less than three weeks ago and the victory over league newcomers Namungo earned them a third trophy, replicating their performance from the 2016/17 season.

Miquissone opened the scoring for the Wekundu Wa Msimbazi in the 28th minute with a low shot after picking up a precise pass from Bocco. The Mozambican then turned provider for his skipper in the 39th minute swinging in a cross that was headed in by Bocco.

Namungo pulled one back in the 56th minute through Edward Manyama, but Simba defended the lead to ensure they clinched the trophy. Miqquissone was named man of the match.

The league newcomers will be proud of their performance reaching the final of the cup competition which also earns them a ticket to play in next season’s African Confederation Cup, with Simba playing in the Champions League.